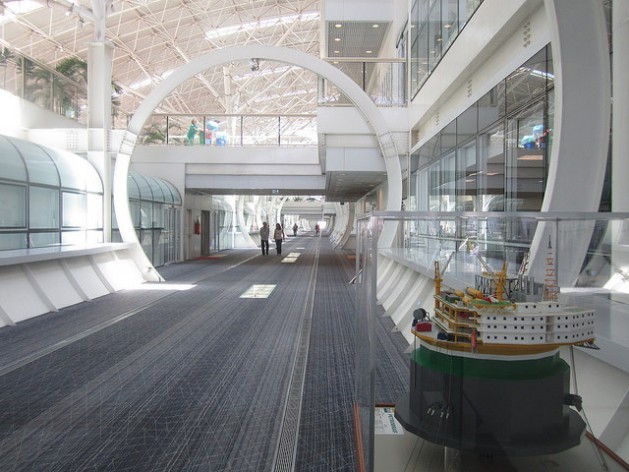 The third floor of the central building of Petrobras’s R&D centre, CENPES, built in 2010 on University City Island. On the right, a scale model of an oil rig. Credit: Mario Osava/IPS

One challenge is the water extracted with the oil, the proportion of which grows with the age of the well, reducing productivity by using up an increasing proportion of the transport and processing capacity of the productive installations.

“Since two years ago we’ve had a separator of oil and water that operates at a depth of 2,000 metres,” said Oscar Chamberlain, head of supplies and biofuels in the Research and Development Centre (CENPES) of Petrobras, Brazil’s state oil company. “That water, in time, can represent 80 percent of the volume extracted, which is why it has to be separated deep down in order to not overtax the rig.”

Rio de Janeiro has become a centre of know-how and innovation in offshore oil, thanks to CENPES, which has 227 laboratories and a technological park where 52 institutions and companies have set up shop so far, including 12 multinational corporations.

“There are no longer any technological barriers to the production of oil in the presalt layer; all of the challenges identified – involving the distance, depth and complexity posed by the layer of salt - have been overcome.” -- Luiz Felipe Rego

University City Island, widely known as Fundão Island, is the epicentre of that transformation. It is the campus of the Federal University of Rio de Janeiro (UFRJ), near the international airport of this city that is more famous for its beaches and carnival.

This development has been driven by Petrobras’s 2006 discovery of oil deposits in what is known as the presalt area, under a two-kilometre-thick salt layer more than 5,000 metres below the surface in the Atlantic ocean.

The presalt reserves are at least 250 km from the coast of southeast Brazil, which poses logistical difficulties.

“There are no longer any technological barriers to the production of oil in the presalt layer; all of the challenges identified – involving the distance, depth and complexity posed by the layer of salt – have been overcome,” Luiz Felipe Rego, Petrobras general manager of well engineering, told IPS.

As a result, just eight years after they were discovered, the presalt reserves account for 23 percent of Petrobras production in Brazil, which in October climbed to 2.58 million barrels a day of oil-equivalent, including natural gas.

But the constant battle to reduce costs has fuelled the effort to do as much as possible deep below the surface, with underwater systems that require electrification, robots and remote maintenance services in a corrosive, high-pressure atmosphere with wildly varying temperatures, said Chamberlain, a Nicaraguan who has been with Petrobras for 30 years.

Corrosion is a threat at every stage of the process, all the way up to the refinery where the petroleum can damage the equipment if the excess salt is not previously removed.

CENPES was founded in 1963 when Petrobras, a state company created to explore for oil and reduce the imports that Brazil depended on, was 10 years old. Its 1,930 researchers, 36 percent of whom hold masters’ or doctoral degrees, are now carrying out 862 R&D projects.

“Thanks to their work, Petrobras is the Brazilian company that has applied for the most patents in Brazil and abroad,” the executive manager of CENPES, André Cordeiro, told IPS. “In 2013 alone 56 new applications were made.”

Petrobras’s investment in R&D, administered by CENPES, has increased nearly eight-fold so far this century. The annual average, which stood at 160 million dollars from 2001 to 2003, climbed to 1.2 billion dollars in the last three years. 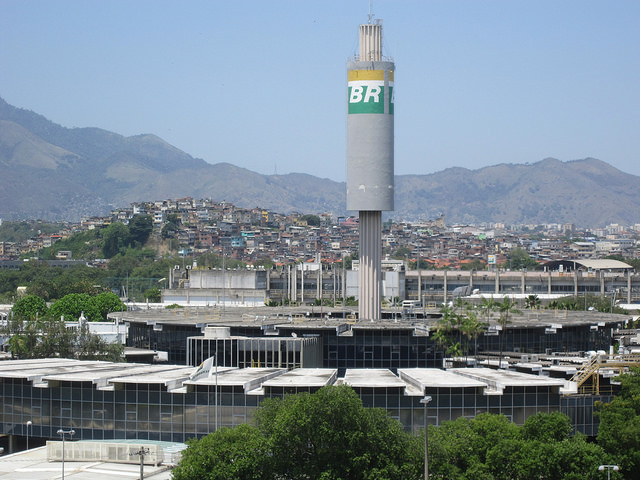 A circular laboratory and office building in CENPES, built in 1973 on University City Island in Rio de Janeiro. The Maré and Floresta de Tijuca favelas or shantytowns can be seen in the background. CENPES is the R&D arm of Brazil’s state oil company Petrobras, whose symbol is BR. Credit: Mario Osava/IPS

“We currently work with 122 Brazilian universities and research institutes, organised in 49 thematic networks – a model that has fomented partnerships between Petrobras and academia in strategic questions in the area of oil and gas,” Cordeiro said.

The closest partnership began 46 years ago with the UFRJ’s Alberto Luiz Coimbra Institute for Graduate Studies and Research in Engineering (COPPE), which is also a technology business incubator.

For example, Ambidados, which emerged there in 2006, provides oil companies with environmental assessments and data. And with just 11 staff members in its office in the UFRJ’s Technological Park, it created its own buoys and devices to monitor wind, tides, ocean currents and rainfall, which affect operations out at sea.

“We also study the ocean bottom relief, the water temperature at different depths, the salinity, and the amount of algae,” oceanographer Leonardo Kuniyoshi told IPS.

There are another 31 small and medium-sized companies in the Technological Park, along with seven laboratories, and R&D centres of global leaders in oil industry services and equipment, such as Schlumberger, FMC Technologies and Halliburton, which recently acquired Baker Hughes, another oilfield services provider with offices on Fundão Island.

The U.S.-based GE opened its new Global Research Centre in the park on Aug. 13, joining other multinationals outside the oil industry, such as France’s L’Oreal cosmetics company and Brazilian beer maker Ambev.

That also requires “bringing companies and the university together in the same place, to generate knowledge that gives rise to products and services, because without business, technology and know-how are lost,” he said.

The park was designed to hold 200 companies in its 350,000-square-metre area at the southeastern tip of the island, which belongs to the UFRJ. The area was flood-prone and had to be filled in before the Technological Park opened in 2003. One hundred thousand truckloads of soil and rubble, dumped over the space of four years, raised the ground level two metres, Guedes said.

After the discovery of the presalt reserves, which meant Brazil could become one of the world’s leading oil producers and exporters, the park began to attract major international firms like the British multinational oil and gas company BG Group or Germany’s Siemens.

The list includes information technology companies that are not limited to oil industry services, such as EMC2, which opened “its first research centre outside of the United States” in the UFRJ park, according to Karin Breitman, the company’s local chief scientist.

The future of the Technological Park and oil industry research is ensured in Brazil. Contracts to exploit the country’s oilfields require that the companies must invest one percent of their revenue in R&D.

That adds up to some 12 billion dollars over the next 10 years. “The combination of technological challenges and resources to tackle them promises success,” said Guedes.

Besides boosting the oil industry’s productivity, the R&D contributes to the development of other sectors, with oceanographic and environmental knowledge and multiple-use technologies.

One example is the hyperbaric chamber, a steel vessel in which atmospheric pressure can be raised or lowered by air compressors, which is being used to generate electric power from waves, in a plant developed by Coppe. New materials, new inputs and energy solutions will emerge from the bottom of the sea, said Guedes.