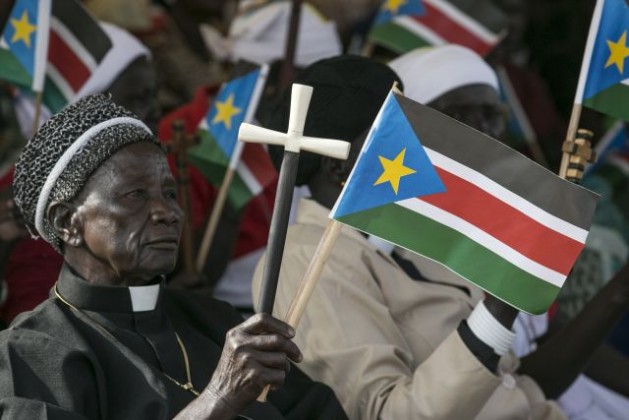 A man at a political rally held by Salva Kiir, President of the Republic of South Sudan, in Juba, March 18, 2015. Credit: UN Photo/Isaac Billy

JUBA, Aug 18 2015 (IPS) - Dismissing efforts, including those of U.S. President Barack Obama, to sign off on a peace agreement and end the 20-month-long civil war in the world’s newest nation, South Sudanese President Salva Kiir declined to sign, saying he needed more time for consultations.

President Kiir’s team reportedly had “reservations” over the deal and wanted an additional 15 days before returning to sign, Seyoum Mesfin, mediator for IGAD, a regional group, told the media.

Among the issues in dispute were the structure of the government, the powers of the president, and the vice president, power-sharing percentages, security issues, and the demilitarisation of Juba and other places.

Then, in a move that would add fuel to the fire, President Kiir on Monday removed four elected state governors and arrested one of them.

The actions by the South Sudanese leader threw the U.S. strategy into a tailspin. A State Department release expressed “deep regret” for the failure to sign a peace proposal by Monday’s deadline.

“The United States deeply regrets that the government of South Sudan chose not to sign … We call on the government to sign the agreement within the 15-day period it requested for consultations,” State Department spokesman John Kirby told reporters at his daily briefing.

Meanwhile, a film that shows that cost of war and colonial exploitation in South Sudan, opened in New York on Monday. The film, “We Come As Friends” is a work by Austrian-born filmmaker Hubert Sauper who previously made the film “Darwin’s Nightmare,” a film about Uganda.

That film, nominated for the Academy Award, “sifted through the wreckage of globalization by way of the fishing export industry in Lake Victoria, the impact on local Tanzanians, and a fast-and-loose subculture of Russian cargo-plane pilots.

“We Come as Friends” is firmly rooted in reality, wrote The New York Times in a review. “The ‘land grab’ confirmed in the nighttime scene with the tribal leader has occurred frequently, in Sudan and elsewhere, said Anuradha Mittal, executive director of the think tank Oakland Institute, which has studied such issues.

“It’s not one of a kind — it’s not a small trend; it’s widespread,” Ms. Mittal said of the kind of “resource theft” that Sauper depicts.