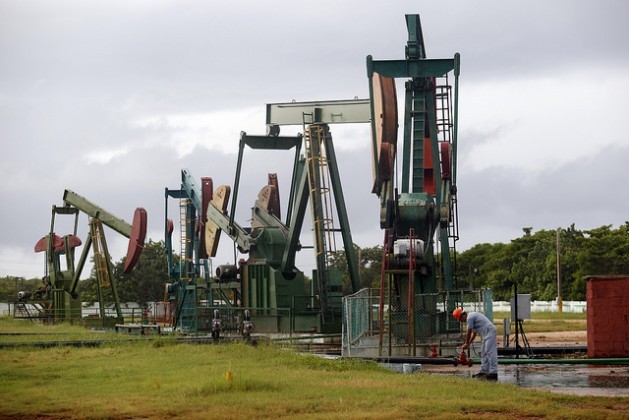 CÁRDENAS, Cuba, Oct 27 2015 (IPS) - Cuba’s oil industry only exploits five percent of the petroleum found in onshore and offshore deposits due to a lack of foreign capital and technology to develop oilfields like Varadero 1000, the country’s biggest oil operation until now.

“We take what the rock gives up easily (crude oil and associated gas), equivalent to five percent of the total potential,” María Yodalis Hernández, head of business affairs in Cuba’s Drilling and Oil Extraction Company (EPEPC), told foreign correspondents in this city 150 km east of Havana.

The thaw in relations with the United States, which has led to the restoration of diplomatic ties and the opening of embassies, “gives us the chance to show that Cuba has opportunities in the oil industry,” she said.

"Ninety-five percent (of the oil) is left unextracted because our company has not yet managed to put into practice any secondary recovery method. Heavy investment is needed in a geographic area that is very delicate from an environmental standpoint." -- María Yodalis Hernández

“The main oil industry resources and cutting-edge technology come from Houston, in the United States,” the expert added.

As other oil industry officials have stated, she stressed that this Caribbean island nation is open “to all kinds of business” with U.S. companies – which is still impossible, however, because of the embargo still in place since 1962.

There were 90 wells operating in the Varadero deposit, next to the international resort of that name, near Cárdenas. Since the discovery of the deposit in 1971, “it produced over 185 million barrels, until it was closed in 2014,” Hernández said during a tour of the installations.

“Ninety-five percent (of the oil) is left unextracted because our company has not yet managed to put into practice any secondary recovery method,” she said. “Heavy investment is needed in a geographic area that is very delicate from an environmental standpoint.”

Hernández was referring to the risks of stepping up oil industry activity and affecting the 22 km of stunning beaches in Cuba’s main tourist area, which accounted for a full 38 percent of the tourism industry’s 2.7 billion dollars in revenue in 2014.

These and other conflicts are faced by the energy industry, along with challenges such as modernising and becoming sustainable with a larger proportion of renewable sources, in response to the reforms and measures introduced since 2008 by the government of Raúl Castro with the aim of reviving the economy. 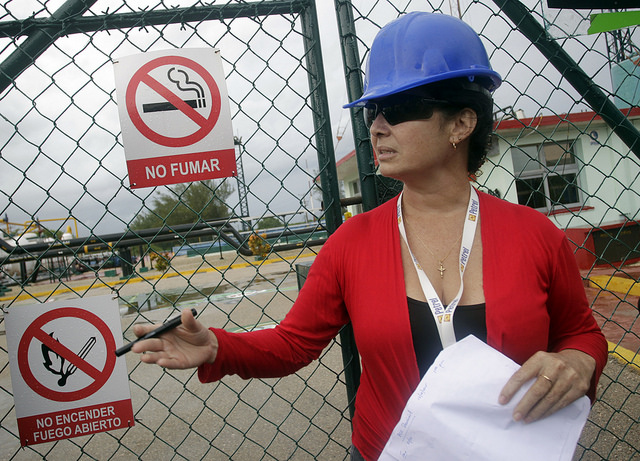 The only secondary recovery operaton in Cuba got underway in December 2014 in Boca de Jaruco, 40 km east of Havana – an oilfield that was selected because it is one of the oldest, active since the late 1960s.

Experts from China, Russia and Cuba are using the thermal stimulation technique in Boca de Jaruco. It consists of injecting steam into the layers of rock to reduce the viscosity of the oil to make it easier to extract.

The president of CUPET, Osvaldo López, announced on Oct. 21 that Cuba would begin a campaign of deepwater drilling in the Gulf of Mexico in late 2016 or early 2017, with the participation of Venezuela's state oil company PDVSA and Angola's Sonangol.

The exploratory wells will be drilled 7,000 metres down and up to 3,000 metres offshore, in an area where Cuba estimates that there could be 20 billion barrels in reserves, although U.S. researchers estimate just five billion.

In 2012, three exploratory deepwater wells turned out to be dry.

“We have to investigate the right method for our oil, besides ensuring a heavy investment flow for years,” said Hernández at the Centro Colector 10, a unit that extracts 1,500 barrels a day and separates out the natural gas from Varadero wells.

EPEPC – a subsidiary of Cuba’s state oil company CUPET – “is made up of eight other collector centres like this one,” which mainly hire local labour, engineer Miguel Sotolongo, head of the extraction workshop of the company, which produces 27,000 barrels of oil and 900 cubic metres of natural gas per day, told IPS.

Through a closed process that is certified by the environmental authorities, the extraction units today make use of the associated natural gas, which was burnt off until a few years ago. Besides the loss of fuel, the practice was harmful to human health, and caused a stench along the road into Varadero.

The company also imports some 90,000 barrels a day from Venezuela, under preferential payment terms.

The refinery in Cienfuegos, 232 km southeast of Havana, which processes 65,000 barrels a day of crude oil from Venezuela for domestic consumption and for export to other Caribbean nations, is operated by a joint venture between Cuba and Venezuela, a strategic political ally.

This figure may be included in the 135,000 barrels a day refined by CUPET, although there has been no official confirmation of this.

Cuba’s oil is difficult and costly to produce and process as it is extra-heavy, with API gravity between eight and 12 degrees, compared to the 34 degrees of the Gulf producers’ light oil. 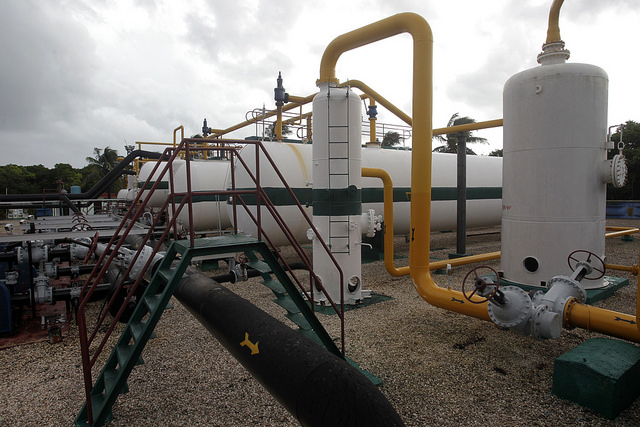 Installations at the Centro Colector 10 oil extraction unit in the city of Cardenas, in the Cuban province of Matanzas, which is operated by EPEPC, a subsidiary of Cuba’ s state-run oil company CUPET. Credit: Jorge Luis Baños/IPS

Gas and crude oil cover 40 percent of energy demand in this country of 11.2 million people, including electricity generation.

The current level of production was achieved thanks to a steady stream of investment and joint ventures with foreign companies, which began in 1991, from countries led by Canada, Australia, China, Russia and Venezuela.

Oil and gas represented the largest number of opportunities in the list of business proposals presented to foreign investors in 2014.

With respect to consumption, Cuba is putting a priority on the use of renewable sources, which are to make up 24 percent of the energy mix by 2030: 14 percent from sugarcane biomass, six percent wind energy, three percent solar and one percent hydropower.

But in Matanzas, the province of 650,000 people where Cárdenas and Varadero are located, energy development is focused on fossil fuels.

“More can be done; for example, investment in exploration studies onshore is planned,” the economic vice president of the provincial government, Lourdes Sarmientos, told IPS.

And with regard to consumption, apart from fossil fuels, “the source that is used most widely is solar water heaters, in the public sector and the tourism industry,” said Sarmientos, a chemical engineer. “In agriculture, we are using sugarcane biomass, and we are extending the use of biodigesters and mills for irrigation and water pumping.”