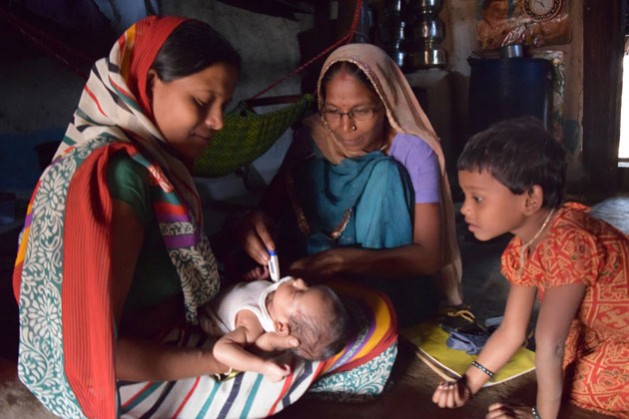 DHARNI, India, Nov 12 2015 (IPS) - In the semi-darkness of her hut in Berdaballa, a forest village 610 km northeast of Mumbai, 28-year old Babita Mavaskar sat with her newborn baby boy watching him checked by a paramedic in an important antenatal exam. After about 20 minutes the health worker emerged from the shelter and made a big announcement, “All is well. Everything, the weight, temperature and height … is normal.”

The small crowd of well wishers gathering outside is relieved. “Let’s now find a date to name the child,” someone shouts.

This tribal community in western India, with the help of doctors and paramedics, is fighting a spirited battle against the twin evils that have disrupted their lives for decades: chronic hunger and severe malnutrition. It is an unending saga of chronic poverty and extreme hunger.

Berdaballa is one of the 312 tribal villages located within Melghat Tiger Reserve and one of India’s most popular tourist destinations. But since late 1990’s hundreds of children here have died annually, most of acute malnutrition. A report by the region’s Mahatma Gandhi Institute of Medical Sciences puts the number of deaths at 460 annually. The report also states that on an average, 75 per cent children under 5 years of age here suffer from malnutrition. This is far higher than the official national average of 42.5 per cent.

The main reasons are extreme hunger, poverty, besides low education and ignorance about health and nutrition. “Chronic hunger and poverty are perennial problems of the tribal people here,” said Dr Ashish Satav, a physician and head of MAHAN trust, a charity that provides free healthcare and training to the local indigenous people.

“They have inadequate and low quality of food; their diet consists mainly of bread and lentils which doesn’t provide enough nutrition” said Satav. Since 1997 he has conducted multiple surveys of the tribal villages to determine the causes and extent of malnutrition here and leads a team of doctors and paramedics working to prevent severe malnutrition in 15 tribal villages.

Ambadas Adhav, a doctor who manages MAHAN Trust’s anti-malnutrition works in Melghat said that 90 per cent of the villagers here have marginal land holding and are unable to make a living from their rain-fed only farms. So, from November to June, there is mass labor migration to the cities. “But as they possess little or no education, these forest people are often victims of labor exploitation in the city,” Adhav said.

Kashiram Mavaskar, Babita’s husband, is a witness to this. In August, the marginal farmer turned daily wager migrated to Akola, a town 150 km away, to provide for his ageing parents and a pregnant wife. But with only 50 rupees a day, far below the government declared minimum wages of 366, he is finding it hard to save enough money and return home.

“Now that the baby has arrived, I want my husband to come home. But he says that it will be not be possible because he has no money yet,” said Babita, his wife.

The vicious cycle of chronic poverty and hunger is heightened by early marriage, another reason behind the high rate of malnutrition in Melghat.“Girls are usually married here at 15 or 16 years of age. When they give birth, babies are born underweight which results in severe malnutrition and related diseases, often causing death,” Adhav said.

17 year- old Suman Madhu of neighboring Semadoh village is an example. Married at 16, Suman had a miscarriage earlier this year when she was 6 weeks pregnant. Since then, she has been bed-ridden, too weak to walk. “Her arms are as thin as a child’s fists. Doctors say that she was married too early, but in our community every girl is married in that age,” said Sindhu Bai, her aunt.

In Maharashtra, near, prevalence of underweight in children under 5 years of age is 37 per cent, according to the government. “The government has accorded high priority to the issue of malnutrition and is implementing several schemes/programmes as direct targeted interventions,” said Maneka Sanjay Gandhi, Indian Minister of Women and Child Development. The programs include Integrated Child Development Services (ICDS), Rajiv Gandhi Scheme for Empowerment of Adolescent Girls (RGSEAG), and Indira Gandhi Matritva Sahyog Yojna (IGMSY), she said.

But paramedic Urmila Kasdekar said that a combined package of intensive counseling, easy-to-avail healthcare facilities and low cost nutrition is the key to ending malnutrition among the tribal communities.

“Here, people need to be explained everything because they are not educated,” says Kasdekar. Armed with flip charts and a book of illustrations, she regularly counsels the 300 families in her village against child marriage and malnutrition. A typical counseling session includes explaining to the villagers how poor diet and early marriage can complicate a pregnant women’s delivery and affect a baby’s health. It also includes informing women of how to make low cost nutrition supplements at home, importance of calcium and folic acid pills and government healthcare schemes for mothers and children.

Due to this intensive counseling and monitoring, all the 15 villages under the care of MAHAN Trust are free from severe malnutrition. The rates here have fallen from 75 per cent to below 4 per cent over time, which is normal according to UNICEF, Adhav said.

As the world moves into the era of Sustainable Development Goals, there must be a greater nexus between poverty eradication and community health improvement, experts say.

“We cannot end malnutrition deaths without correlating all the social development factors that cause them such as poverty, food and water scarcity and lack of alternative livelihood. We must also generate more community awareness, demonstrate intensive counseling and motivate medical caregivers to improve their services,” said Satav.

In Semadoh Sindhubai is preparing to mortgage an acre of her land so that her niece can be treated in a city hospital. This will mean less food for her family next year, but it’s a risk they are willing to take: “We are pawning the land for 10,000 rupees. We hope this will help our girl to be well again,” she said.