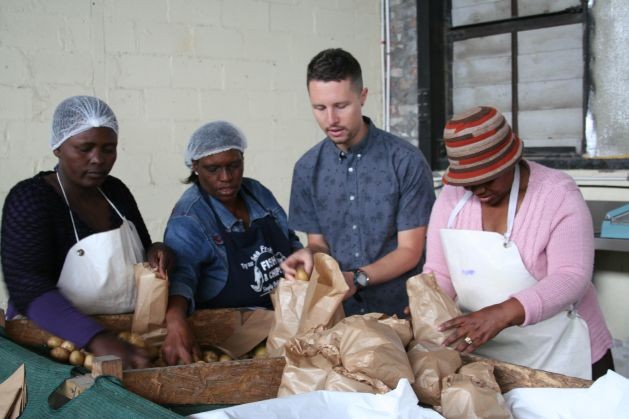 CAPE TOWN, Nov 24 2015 (IPS) - Every Tuesday, there is something unusually exciting at no 7 Cwango Crescent, The Business Place, in Philippi, near Cape Town.  Here, ​ dozens of chemically free green vegetable crate loads are visible. So are the unlabelled rows of empty packets. It’s the packing day.

Trucks criss-cross Khayelitsha, Gugulethu, Philippi and Nyanga – all densely populated communities outside Cape Town – and Stellenbosch to collect vegetables and drop them off at the Philippi centre for delivery to customers.

​These are products of about 80 small-scale urban farmers who successfully supply fresh organic vegetables once week.

They are part of a scheme of more than 100 farmers known as Harvest of Hope, an initiative of Abalimi Bezekhaya that helps community farmers grow vegetables in their backyard gardens.

Abalimi Bezekhaya is a farmer focused organisation that supports home and community gardens and guarantees purchase of all vegetables from these gardens.

​”The small farmers have an opportunity to produce nutritious food and make money for themselves,” says McKinney.

An assortment of vegetable pack for two people a week costs R99 (about 7 dollars) and bigger pack costs R133 (about 10 dollars) for four people.

“I test the soil and vegetables to make sure they are free of heavy metals and pesticides,” says Christopher D’Aiuto, a soil scientist and Harvest of Hope, production coordinator.

D’Aiuto told IPS that with more than 35 gardens and farms that supply Harvest of Hope, they have to make sure they are all using organic agriculture, and the easiest way is through annual testing. “I am also pushing production to source organically produced seedlings and seeds,” he says.

Abalimi could pass the test of fighting poverty and provision of healthy and nutritious food, but the striking reality is, even chemical grown nutritious food is not enough on South Africa’s dinner tables.

South Africa’s constitution is one of only 23 in the world that guarantees the right to food, yet the country suffers from malnutrition, both under-nutrition which spawns hunger and starvation and over-nutrition resulting in obesity. 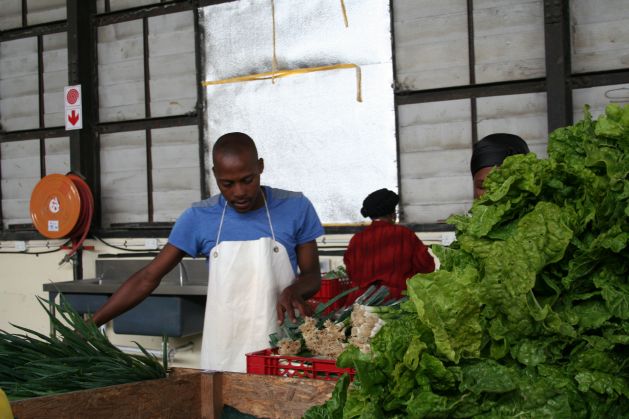 Spinach and Spring Onions. On a Tuesday all the farmers bring their goods to the market. Credit Astrid Stark/IPS

Statistics are staggering. The Food and Agriculture Organization of the United Nations (FAO) says the right to adequate food is not being fulfilled as globally more than 793 million people going to bed hungry every night.

There are 11 million South Africans who are living in cases of extreme poverty and who are hungry every single day, according to the World Food Bank.

The UNICEF South Africa says malnutrition is a major cause of death in 64 per cent of South Africa’s children under the age of five. The South African National Health and Nutrition Examination survey showed that stunted growth in children is one of the main indicators of malnutrition.

“It raises an alarm,” says Scott Drimie, director of the Southern Africa Food Lab (SAFL), South Africa’s multi-stakeholder platform to address concerns on food systems. “How did we get there?”

There are equally a high number of obese adults and these cases bring out the complex story of the food people are eating and where they are living. It also boils down to availability on water and investment in health services, says Drimie.

“If water and sanitation are in adequate people will be unable to utilise the food, they cannot break the micro nutrients in their bodies,” he told IPS.

Drimie says wrong food is a societal problem, there is need to look at food systems, their link to health and we need an inter-sectorial response.

“As a middle income country South Africa should not have the problem with malnutrition or obesity. We have the mechanism, we have the resources, and the broader political question is why it is not being done,” he says adding, the right to food is not being observed. 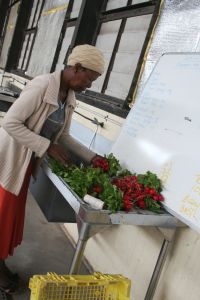 Cleaning and prepping the radishes, ready to go into the bags. Credit Astrid Stark/IPS

A study by pharmaceutical giant, GlaxoSmithKline (GSK) in 2010 found that 61 per cent of South Africans are overweight, obese or morbidly obese.

“A lot of malnutrition and obesity is routed in poverty. There are like different sides of the same coin,” Tatjana von Bormann, programme manager for market transformation at World Wildlife Fund for Nature South Africa told IPS. Obesity is a form of malnutrition and for most parts this often stems from poor choices, she adds.

There are good policies in place in South Africa such as encouraging mothers to breastfeed, but it’s the food choices that people make and these cannot be blamed on government, says von Bormann.

South Africa’s Value Added Tax (VAT) zero rates basic foodstuffs to cushion the cost on the poor. A law enacted in October 2013 ensures the fortification of maize meal and wheat bread flour to micronutrients such as Vitamin A, Folic Acid, Iron and Zinc.  Other measures so far instituted include the regulation of salt in foodstuffs.

Von Bormann says malnutrition can also be blamed on the cost price of food.

“Because of price you eat what you can afford, the healthy food is often the most expensive food, maize, which is a staple, has limited nutrition and it makes people fat.  It becomes a question of convenience, it can be what is always available or even what tastes good,” she says.

The problem might stem from advertising and to find a solution in business marketing, Von Bormann adds.

Where the right is

In January 2015 South Africa joined other 163 countries that approved the 39-year-old International Covenant on Economic, Social and Cultural Rights (ICESCR) whose obligations include among other things, provision of adequate food.

The Right to Food in South Africa, a study released this year by the Studies in Poverty and Inequality (SPL), says the right to food policies implemented in the post-apartheid era have failed to alter the structural imbalances in South Africa’s food system, or to eliminate hunger and malnutrition.

In South Africa, food availability is not a significant concern. Whether through its own production or importation, there is sufficient food available at the national level, observes the report.

“The government, while active on realising the right to food through a number of initiatives, has nevertheless failed to develop a coordinated and comprehensive response to this right,” the report argues.

Although the new National Policy on Food Security and Nutrition from the Department of Agriculture, Forestry and Fisheries has been lauded for providing some new thinking and guidance on government work around food security, according to the study. The policy gives more attention to land reform and agriculture at the expense of factors affecting urban informal food insecurity.

“The policy does well to situate food security within the broader picture of poverty in South Africa, but is short on ideas for stimulating employment creation,” it says.

Sasha Stevenson, an attorney with Section 27, says that food is a basic right enshrined in the country’s constitution, but we need to understand what that right means in practice.

Stevenson says real difference on the right to food law will come if all sectors, different people in the process, among them small farmers and retailers are spoken to.

“Without that knowledge it makes it difficult to assess. The first step is to open policymaking,” Stevenson told IPS.