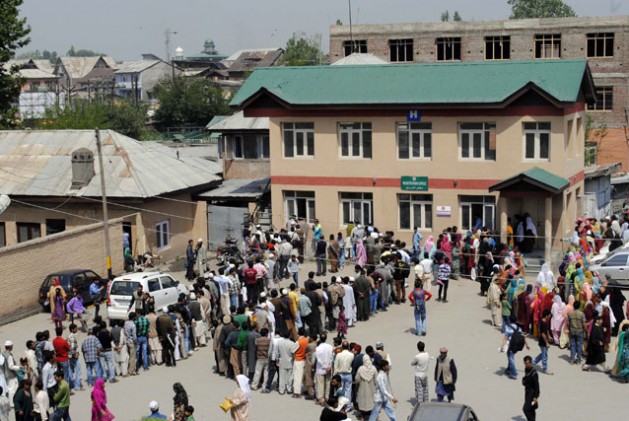 SRINAGAR, India, Dec 18 2015 (IPS) - In an isolated ward of one of Kashmir’s largest government-run hospitals, 54-year-old Ashraf Ali Khan is finding it hard to sleep properly. His 15-year-old son, Asif, is sitting on a bench near the bed staring at his ailing father.

Ashraf Ali, a carpenter, went to the doctor eight months ago after persistent coughing. He had a chest X-ray which then led to further examinations. After series of tests, it was finally he was diagnosed with lung cancer. He has two months to live at best.

Ashraf is among thousands of people who have ben struck down with the disease. In a war-torn Kashmir, about 4000 cases are found every year in this Himalayan region.

Apart from the political uncertainty, which so far has claimed thousands of lives, experts says there is a 20 per cent rise in cancer cases in Kashmir with figures never decreasing. The latest data published by the state’s health department has Kashmir topping the list of cancer cases in India.

Experts say the cancer mortality rate among the people in Kashmir witnessed a sharp increase due to some leading behavioural and dietary risks, including high body mass index, low fruit and vegetable intake, lack of physical activity, tobacco use and lack of regular check-ups. Changing lifestyle, environmental degradation and differing food habits are reasons attributed to the surge in all the cancers especially in esophagus, colon and breast cancers.

Kashmir’s leading oncologist Mohammad Maqbool Lone says the situation in Kashmir is becoming more grim every day a with the highest number of lung cancers In the country found in the people of Kashmir.

“The situation is indeed alarming in Kashmir. There are patients hailing from every part of Kashmir including the far flung areas which are diagnosed with such a terminal disease,” says Lone.

Until now no single factor has been identified as the main cause of the rising cancers as compared to other regions of India. As health experts in Kashmir are not certain about the major causes for the rise of the deadly disease, they suspect three main components can trigger the rise of cancer in this Himalayan region.

One is a societal component with poor rural lifestyles and general deprivation, in particular a lack of vitamins and dietary nutrients.

The second reason for rising cancers in Kashmir is the use of copper utensils in cooking, the consumption of spicy, deep fried foodstuffs, and the drinking of hot salty tea which is largely being consumed in every home in Kashmir.

The third factor in rising cancer cases is an environmental issue with exposure to high levels of dietary nitrosamines from diverse sources. Overall, these three components are the general pattern that has led to esophageal and other cancers.

Oncologist Abdul Rashid Lone says that rising numbers of smokers has led to a rise in lung cancers here. He also claims that the detection rate also has increased besides the advancement in medical technologies.

“Earlier, most of the cancer cases in Kashmir used to go unnoticed. At present, the technology has advanced so much that a patient can be diagnosed with the disease. This is the main reason that today we say cancer cases rise in Kashmir,” Dr Lone said.

Oncologist Riyaz Ahmad Shah says that apart from the lung cancer, there are cases of stomach cancer on the rise in Kashmir. He says certain types of cancers are found in children including blood cancers and tumours.

“In case of females, there are cancers related to the reproductive system like cervical cancer, ovarian tumours and breast cancer. In males there are stomach, lung, and esophagus cancers found,” said Dr Shah.

Renowned gastroenterologist, Dr Showkat Ahmad Zargar, says any delay in the detection of cancer could prove fatal for the patient. He says due to the massive adulteration in food items, gastric diseases are on rise in Kashmir.

“Such diseases are killing people slowly. The people here are not very much health conscious which leads to the delay in detecting whether a person is suffering from a cancer or not,” Dr Showkat said.

“There are high chances that a person suffering from cancer can be cured if detected at early,” said Dr Sana-ul-lah who heads the oncology department in one of Kashmir’s leading government run hospitals.

Tobacco use in Kashmir has increased along with unhealthy diets. “If the key risk factors are avoided, Kashmir could be saved from this fatal disease which continues to claim thousands of precious lives every year in the region,” Dr Sana-ul-lah said.

Insha Usman, a research scholar says there are no major steps being taken by the state government to ensure that people are informed and are aware of cancer. She says early symptoms and preventive measures should be made public in far flung areas of Kashmir so that people are conscious of the cancer threat.

“Ironically, there is no comprehensive policy available with the government at the present time that could have made people aware of such a fatal disease. Mass awareness campaigns in villages and towns and people are informed about the symptoms of cancer and early treatment,” she said.

According to the latest study, colorectal cancer (CRC) is the major cause of mortality and morbidity worldwide and in Kashmir, CRC has been found to be the third most common gastrointestinal cancer after esophageal and gastric.

The study says there are certain factors which increase person’s risk of developing CRC. “The most important of these are the age, diet, obesity, diabetes and smoking, personal cancer history, alcohol consumption, large intestinal polyps, family history of colon cancer, race and ethnic background, genetic or family predisposition,” said the finding.

It adds that another major cause of cancer deaths was a late visit to the doctor. “The involvement of quacks, inexperienced medical practitioners and post-referral delays make the situation difficult to handle,” the study concluded.

The steady rise in cancer patients began several decades ago leading to the establishment of an NGO. The Cancer Society of Kashmir, formed in 1999, provides medical and financial help to poor patients suffering from the dreadful disease here.

Masood Ahmad Mir from Cancer Society of Kashmir says that they have started a one-day care centre which runs twice a week. “During this time, doctors from different fields like medical oncology, radio oncology, and gastroenterology sit together and treat patients. We do not charge anything from the people who visit us for the treatment,” he said.