PARIS, France, Dec 10 2015 (IPS) - When Dr. Evelyn Nguleka says that the world’s people shouldn’t bite the hand that feeds them, she explains that she’s not only referring to protecting farmers, but also to safeguarding the environment.

“The earth feeds us and farmers are responsible for feeding the world. We need to protect both,” says Nguleka, President of the Zambia National Farmers’ Union and also of the World Farmers’ Organisation (WFO), an international body of agricultural producers.

The WFO and other groups, as well as individual farmers from around the world, are in Paris to argue that a binding agreement on climate change must take agriculture into account. 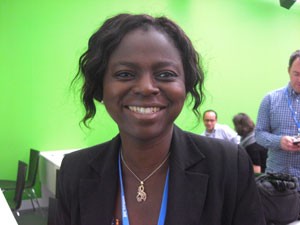 Evelyn Nguleka, World Farmer’s Organisation Chief Warns the World to Look Out for Farmers at the Paris conference COP21. Credit: A. McKenzie/IPS

“We’re not only part of the problem, but we’re also part of the solution, and that is crucial,” Nguleka said at a high-level panel discussion Wednesday at COP 21 (the 21st Conference of the Parties to the United Nations Framework Convention on Climate Change), which began Nov. 30 and runs until Dec. 11 in the French capital.

“Leaving out agriculture in the past was a mistake,” she added at the debate titled ‘Agriculture in a Post-Kyoto Terrain,’ organised by the WFO in association with the World Organisation for Animal Health.

With the climate change talks set to end Friday, there is still disagreement among countries, however, on whether the focus should be on mitigation (mainly through reduced deforestation, soil management and increased productivity, as the WFO puts it) or on adaptation.

Some organizations from developing countries argue that farmers from these regions are not responsible for the bulk of greenhouse gas emissions but that they still suffer from climate change and so need support in adaptation strategies.

According to U.N. figures, agriculture is directly responsible for 13.5 per cent of global greenhouse gas emissions (through methane from animal digestion and nitrous oxide from cultivation, including the use of synthetic fertilizers), and indirectly for another 17 per cent of emissions through deforestation or the clearing of land to feed and graze animals.

Big agri-business has also been criticized for a host of unsustainable practices including monoculture plantations and the widespread use of pesticides and hormones. But civil society groups say that a clear distinction must be made between multinationals and smallholder farmers.

The international NGO ActionAid, which works with smallholder farming communities around the world, many of whom are “already feeling the effects of climate change on their ability to grow food and feed their families,” says that the focus should be adaptation.

“For African countries, who are already feeling the effects of climate change in their agriculture and economies, adaptation is clearly a priority,” said Teresa Anderson, Policy Officer on Climate and Resilience at ActionAid.

“They urgently need support to deal with the impacts of a problem that they have not created.”

“What this really boils down to is ensuring that there will be sufficient financial support available for them to do adaptation, and a recognition that the higher the planet’s temperature goes, the more adaptation and support will be needed,” she added.

Organisations such as IFAD, an international financial institution and a specialized UN agency that invests in poor smallholder farmers in developing countries, says that these farmers “inhabit some of the most vulnerable and marginal landscapes … and are often overlooked in global and national policy debates around climate change.”

IFAD, too, says it is working on adaptation to increase the climate resilience of as many as 8 million poor smallholder farmers.

For the WFO, meanwhile, both adaptation and mitigation are important because “farmers are all under one roof” and need to find solutions together to fight global warming.

At Wednesday’s debate, Nguleka said that agriculture and food security had to be “part of the deal” in any agreement because farmers, particularly in regions such as Africa and Asia, are on the frontline of climate change.

“We need good soils, good air … to be able to do what we do,” she said. “Without preserving the environment, there is no agriculture. We have to be part of the equation.”

Nguleka, a farmer and veterinary doctor, told IPS in an interview that as a child she often accompanied her grandmother to the fields, watching the older woman do back-breaking work in subsidence agriculture.

She said she told herself then that when she grew up she would not choose farming as a career. But she found herself drawn back to the sector and is now advocating for financing and the transfer of technology to help farmers in Africa and other regions.

She warned that when people are not able to feed themselves they will “move up north” and developed countries will then have to deal with more migration and a population boom.

“Technology must be filtered down to the grassroots so people can survive where they are,” she said at Wednesday’s panel discussion.

Tim Groser, New Zealand’s Minister of Trade and Minister for Climate Change Issues, who participated in the debate, said that his focus was on mitigation and that this issue couldn’t be “swept under the rug”.

Pastoral agriculture accounts for about half of all greenhouse gas emissions in New Zealand, he said. Most of this is methane emitted by livestock, and the agricultural proportion is about six times higher than the average for developed countries, which is 7.5 per cent, according to experts.

With this profile, New Zealand is searching for solutions, Groser said, but he added that the “camp towards vegetarianism” is not the answer.

“We’re not going to shoot the cows,” he said, explaining that the aim was to “survive first and then to philosophize” as, in his view, food security was of paramount importance, especially with the world’s population projected to increase to 9 billion by 2040.

Some civil society groups have been urging people to eat less meat and dairy products, as various studies have shown that adopting a vegetarian diet can help in reducing the emission of methane and other greenhouse gases.

But Bernard Vallat, the director-general of the Paris-based World Organisation for Animal Health (OIE), said that if “properly managed” livestock could have a “positive role” in curbing emissions, as animal waste could be used for renewable energy such as biogas.

“We need to ensure a collective and inter-disciplinary approach for sustainability,” he said.

Other panelists called for greater attention to trade and for increased education to play a role in a “comprehensive approach” to sustainability. 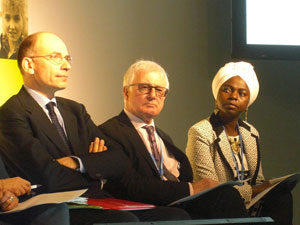 Former Italian Prime Minister Enrico Letta, now a dean at the Paris Institute of Political Studies (or Sciences Po), said that educating people about climate change issues and solutions was “the most important long-term activity.”

He told IPS that COP 21 was particularly significant for farmers because this was the first time that agricultural issues were “at the very centre” of the discussion.

“This is a success not only for agriculture but also the entire issue of climate change because without the involvement of all the agricultural aspects in the big picture, it is impossible to find long-term solutions,” Letta said, adding that farmers had to be part of the solution because “it’s in their own interest.”

Anderson of ActionAid said that the word ‘Agriculture’ is very unlikely to be in the COP 21 text on mitigation, however.

“The United States and European Union, in their attempt to lessen their own obligations for climate action, and to spread the burden to developing countries, have earlier tried to include language on land and agriculture for this reason,” she told IPS. “However, for many developing countries this is a red line, so I would be very surprised to see it appear in the final Paris Agreement.”

Whatever the outcome of the climate change talks, Nguleka of the WFO says that the world still needs to stop biting the hand that feeds it – and especially biting without “having an alternative.”

“If the farmer cannot survive, the whole planet will not be able to survive,” she said. 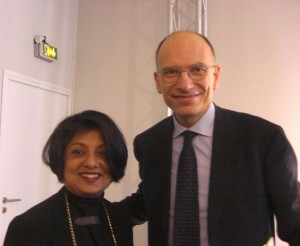