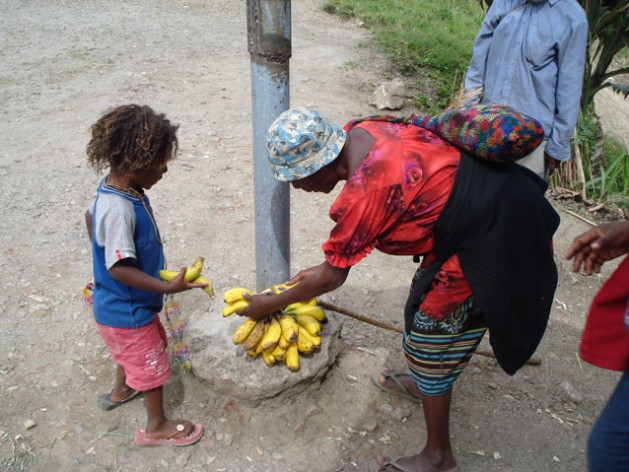 While more than 80 per cent of people are engaged in subsistence agriculture and village food gardens are visible across the landscape, widespread malnutrition, especially in children, is stubbornly evident.

Last year this under-reported health issue, which contributes to nearly half of all hospital admissions, was declared a ‘silent emergency’ in the country by UNICEF. Dr Fiona Kupe, a paediatrician with the National Capital District Health Services in the capital, Port Moresby, and member of the PNG Women Doctors Association agrees. But she points out the quantity of food is not the main issue.

“Mothers’ lack of knowledge about nutrition during pregnancy and the first six months of a baby’s life, when exclusive breastfeeding is best, and about complementary feeds at six months of age and onwards are some of the most critical factors in the initial onset of malnutrition in newborn babies and early infants,” Kupe told IPS.

The rate of exclusive breastfeeding in Papua New Guinea drops dramatically from 80 per cent at one month to 20 per cent at six months, reports the World Bank.

“There is also a need for family planning; most of the malnourished children under two years of age that we see at the clinics have mothers who are already halfway through their next pregnancy,” she continued, emphasising the competing demands which are placed on mothers and sources of sustenance in large families in a country where the fertility rate is 3.8.

Malnutrition occurs when poor consumption of nutritious food threatens the healthy functioning of the body and its organs. Symptoms include underweight, physical stunting, muscle wasting, weak ability to mentally concentrate and increased vulnerability in children to illnesses, such as pneumonia and diarrhoea. It is the main underlying cause of the country’s “Under Five Mortality Rate” of 63 per 1,000 live births, compared to the global average of 43.

In the remote highlands province of Enga, Dr David Mills, Medical Superintendent of Kompiam Rural Hospital, run by Enga Baptist Health Services, told IPS that “Malnutrition is very common….and very directly related to remoteness. Enga is a more rural province and so higher amounts of malnutrition would be expected and this is more related to less education, than less food. Proximity to education is the key in my experience.”

Literacy in the province is about 35 per cent and the “Under Five Mortality Rate, estimated at around 97 per 1,000 live births, is higher than the national average.

Malnutrition is also influenced by local and traditional diets.

“Access to food is generally not an issue for most Papua New Guineans most of the time, except in times of drought. It’s the type of food that matters and that tends to be related to education,” Dr Mills said.

“Traditional diet is sweet potato in the highlands and taro and sago lower down, food types which are high in starch and low in protein. Taro is particularly low in protein; its protein content is sufficient for grown adults, but not for growing children,” he continued.

Gerard Saleu at the National Institute of Medical Research in Goroka, Eastern Highlands, agreed that the nutritious quality of foods is a factor, but added that gender inequality was also known to result in unequal access to food. At meal times “The father gets the most protein and the largest share, while the mother and daughter get the least or nothing after everyone else has been served,” he explained.

And in the southwest Pacific Island state, nutrition deficiency impacts quite widely across the socioeconomic spectrum with a stunting prevalence of 55 per cent in the poorest quintile, but an equally significant 36 per cent in the richest quintile, according to a World Bank report this year. The traditional low-protein diet is a suggested factor.

However, according to Saleu, “The presence of malnutrition among ‘wealthy’ Papua New Guineans will be associated with obesity and due very much to over-nutrition with junk food, rather than nutritious food.”

It’s an indicator of a public knowledge deficit in urban and rural communities, “In other words how families can use the food they can afford or how to create a nutritious meal, that’s lacking,” Kupe said.

Education should focus on reducing the country’s high fertility rate as well, the PNG Women Doctors Association and Institute of Medical Research advocate.

“Family size must be reduced from maximum 14 to maximum 4 children across PNG to improve nutrition and law and order,” Saleu declared, drawing attention to how the quality of nourishment, parental care and educational outcomes critically affect a child’s future.

Supporting that leap, according to the country’s experts, requires expanding rural health services which have deteriorated over the last decade. There are an estimated 0.5 doctors per 10,000 people in Papua New Guinea and more than 80 per cent are employed in urban areas. The National Research Institute reports that 67 per cent of health clinics need rebuilding or maintenance, while visits by physicians and patients have declined by 42 per cent and 19 per cent respectively since 2002.

Arguably persistent malnutrition is a paradox in the most rapidly growing economy in the Pacific Islands, pointing to the need to translate state revenues into human development outcomes. The World Bank’s rationale that poverty and the prevalence of stunting, or poor growth in the height of children, should decline with a country’s positive economic growth, is yet to happen. While Papua New Guinea’s Gross Domestic Product (GDP) has grown from 2-10 per cent so far this century, the stunting rate has largely remained unchanged from 46 per cent in 1983 to the present 45 per cent.