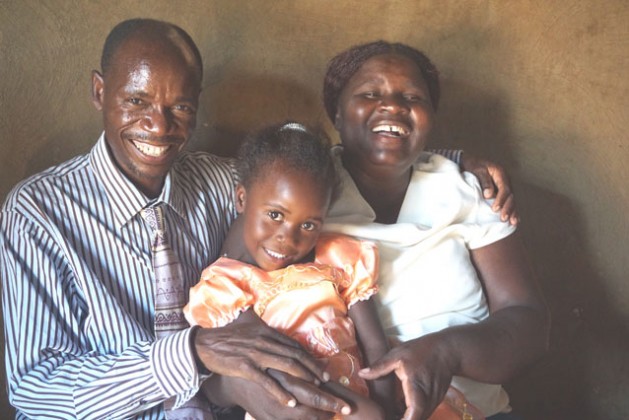 Thanks to PMTCT, three year old Nokuthula Mukonto (pictured) in Shurugwi’s Chida village does not have HIV despite being born to parents living with the virus. Her father, 50-year old Partrick, a high school teacher by profession, has lived with HIV for more than 15 years now while her mother, 43-year old, Mildred, has lived for eight years with the disease, and now an ardent anti-MTCT campaigner. Credit: Jeffrey Moyo/IPS

SHURUGWI, Zimbabwe, Dec 1 2015 (IPS) - With the battle to combat HIV/AIDS intensifying in Zimbabwe, the Prevention of Mother to Child Transmission initiative (PMTCT) has increasingly become a success weapon in the war on transmission of the once dreaded disease to the country’s unborn babies, despite some mothers testing positive for the disease.

At Chikwingwizha Catholic Mission Clinic in Shurugwi in Zimbabwe’s Midlands Province, 57 expectant mothers this year were chosen for Option B+ after testing positive for HIV.

Option B+ refers to lifelong antiretroviral therapy for all HIV-positive pregnant and breastfeeding mothers, which helps in prolonging life and at the same time significantly reducing the risk of mother-to-child transmission of HIV.

From 2011 through September this year, PMTCT through Zimbabwe’s Ministry of Health reached nearly two million pregnant women with antenatal care, and enrolled more than 280,000 HIV-positive pregnant women and over 234,000 HIV-exposed infants into the national PMTCT program.

As a result, PMTCT services are now available throughout this country’s Maternal, Newborn and Child Health (MNCH) clinics in all 62 districts here.

With the PMTCT services now within the reach of many pregnant mothers in Shurugwi, for the women here, life can go on even after testing positive for HIV.

“I have accepted my status and moving on with life, adhering to the treatment doctors prescribed for me,” an expectant HIV-positive mother who only identified herself as Mavis at Shurugwi’s Chikwingwizha clinic, told IPS.

To health experts in this Zimbabwean district, women lead the elimination of MTCT.

“Women are the epicentre of households here as men are often at work as mining artisans, so women readily come for tests on their own,” Dr Shakespeare Mureyani, District Medical Officer for Shurugwi, told IPS.

Seeing the local mothers readiness to test for HIV/AIDS, Dr Mureyani challenged the mothers’ male counterparts to come on board and wade into the MTCT war.

“The message about MTCT needs to be repeated so that it sinks into the community thereby helping us in eliminating the transmission of HIV/AIDS to the next generation of children, and in this case when it comes to testing for HIV/AIDS, preference should be given to couples,” added Dr Mureyani.

True to Dr Mureyani’s word, the message seems to have sunk in most women here.

Here, HIV/AIDS support groups, which also include children living with the disease and those born without the virus owing to PMTCT, have combined efforts in fighting transmissions to unborn babies.

And thanks to PMTCT, many children like three year old Nokuthula Mukonto in Shurugwi’s Chida village have no HIV despite being born to parents living with the virus.

Her father, 50-year old Partrick Mukonto, a high school teacher by profession, has lived with HIV for more than 15 years now.

Mukonto’s 43-year old wife, Mildred, who is chairperson of the local Rujeko HIV/AIDS Support Group, has lived for eight years with the disease, and now an ardent anti-MTCT campaigner.

“We encourage expecting mothers to go for early HIV tests to find out their status and this has been very successful here as more and more expecting mothers testing positive for HIV are turning to PMTCT to save their unborn babies,” Mildred told IPS.

“We also have some people who are HIV-negative in our support group who help in the fight to stop HIV transmissions to infants,” added Mildred.

Even health experts in this remote area testify to the success of PMTCT.

“Since Option B+ was introduced in June 2013, there are very few babies who are being born infected with HIV/AIDS here,” Miriam Shaya, who is the nurse-in-charge at Chikato clinic in Chida village, told IPS.

The headway made in combating HIV/AIDS here come at a time Zimbabwe aims to become the world’s second country after Cuba to receive validation from the World Health Organisation (WHO) in eliminating mother-to-child HIV transmission.

According to the WHO, the term “validation” is used when a country has successfully met the criteria for eliminating mother-to-child HIV transmission and this is pegged at below five per cent of MTCT.

The Elizabeth Glaser Paediatric AIDS Foundation (EGPAF) says Zimbabwe has over the years climbed down from 30 per cent to 6. 7 per cent MTCT in terms of HIV/AIDS, thanks to the PMTCT programs.

EGPAF in partnership with the Zimbabwean government is working hard to reach ordinary people countrywide, particularly expectant mothers to fight the spread of this deadly disease.

EGPAF is a non-profit organization founded in 1988 and dedicated to preventing paediatric HIV infection and eliminating paediatric AIDS through research, advocacy, and implementation of HIV prevention, care, and treatment programs.

EGPAF’s work with PMTCT has been possible through the Children’s Investment Fund Foundation (CIFF), which sought to maximize HIV-free survival among children, consequently putting Zimbabwe on track towards virtual elimination of mother-to-child transmission of HIV.

Meanwhile, CIFF is an independent philanthropic organization, headquartered in London, working to transform the lives of poor and vulnerable children in developing countries in areas which include children and mothers’ health.

According to this country’s Ministry of Health and Child Care, the PMTCT program here has helped to avert over 16,000 new HIV infections in children in 2014 alone.

For organisations helping in the AIDS fight, Zimbabwe’s case amounts to a step in the right direction.

“The country deserves global attention for such achievements and with bigger and better resources can achieve the target for validation to take place. What Zimbabwe has accomplished in the past five years is an inspiration to the world. We can build upon the incredible momentum we’ve generated through our partnership with CIFF and the Ministry of Health here to drive forward towards a future where no child has AIDS,” President and Chief Executive officer of EGPAF, Charles Lyons, said.

He also applauded Zimbabwe’s HIV-positive mothers who “rose above stigma” to seek treatment for their children.

Even Zimbabwe’s EGPAF boss could not hide the organisation’s triumph over MTCT.

“We are delighted at the prospect of a new generation free of HIV in Zimbabwe. The results have confirmed that well-supported and effectively coordinated government PMTCT programs even in high HIV burden countries can help eliminate new HIV infections and end AIDS altogether,” said Dr. Agnes Mahomva, EGPAF Country Director here.

“We now can say with confidence, ending paediatric AIDS in Zimbabwe is not a dream, but by working in partnership with others we can make it a reality and catapult Zimbabwe to virtual elimination of mother-to-child transmission of HIV,” Dr Mahomva added.