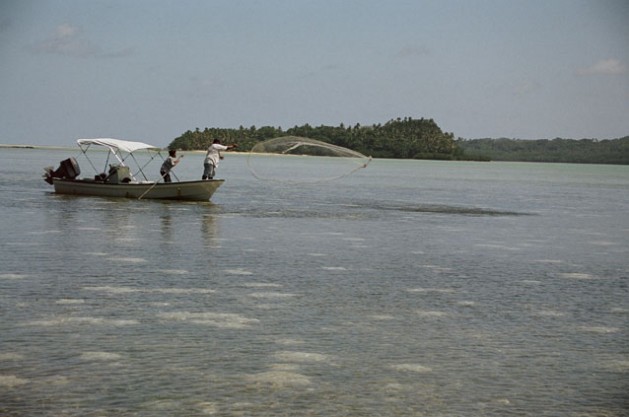 Washington, DC, Dec 14 2015 (IPS) - President Tommy Remengesau Jr. of the Pacific island nation of Palau has cemented a legacy as the world’s most effective protector of marine life by creating a giant marine reserve that will directly benefit his people through increasing tourism and securing its food supply, scientists say.

On October 22, Palau’s parliament unanimously approved a law that over five years will phase out all commercial fishing in 80 per cent of Palau’s waters, dominated by foreign tuna fleets from Taiwan and Japan. The no-take zone, at over half a million square kilometers, will be the size of California or Spain.

Scientists predicted Palau’s approach will work. A recent study found that in the Western and Central Pacific, about 10 per cent of the Bigeye, the most depleted and valuable tuna, spend their whole life inside an area the size of the Palau sanctuary, with the rest roaming outside it and getting caught.

Daniel Pauly, a prominent fisheries scientist at the University of British Columbia in Canada, said research that will be published next year shows that the sanctuary will be big enough to make a difference.

“We found that the offspring of the ‘lazy’ fishes that spend their whole life inside a sanctuary the size of Palau’s will have a genetic advantage over the ones that swim outside of it and get killed,” he said in an interview. “That means that over the next decades, we expect the density of fish inside the sanctuary to increase noticeably.”

And there will be plenty of people to do the noticing: Palau is a top 10 global diving destination with perhaps 90,000 divers a year who form the backbone of a tourism industry that is expected to reach 180,000 visitors this year.

The creation of the Palau National Marine Sanctuary has drawn praise from global conservation organizations.

Joshua Reichert, Executive Vice President of the Pew Charitable Trusts in Washington, D.C., noted that no other leader has protected such a large proportion of his country’s waters. “President Remengesau stands out,” he said. Pew helped design the sanctuary and build grassroots support for it.

“It was not easy and he had to wait a long time, but he’s done it,” added Maria Damanaki, Global Managing Director of the Nature Conservancy, also based in Washington. “He’s a fighter and a visionary, the kind of leader we need,” she said in an interview. The conservancy helped Palau maximize benefits from its fisheries.

Remengesau, who is 59, served two terms as president from 2001 to 2009. In 2005, hosting a meeting of fellow Pacific island leaders discussing how they could save their coral reefs from excessive fishing, he pledged to turn 30 per cent of his country’s coastal waters into marine parks where fishing is restricted or banned. And to protect these areas from pollution from coral-killing silt runoff, he pledged to restrict construction and farming in 20 per cent of the coastline, the parts above the marine parks.

He urged the other countries to follow his example and called it the Micronesian Challenge. It was immediately taken up by the Federated States of Micronesia, the Marshall Islands, Guam and the Northern Marianas Islands. In 2008, it spawned a 10-country Caribbean Challenge with similar goals, along with a Pacific Oceanscape project with more distant ambitions. Today, Palau has doubled its initial goal and reduced fishing to sustainable levels in 60 per cent of its near-shore reefs, of which a quarter is no-take, said the minister of natural resources, environment and tourism, Umiich Sengebau.

Still, he admitted, “Our fishermen say that there’s less and less tuna near the coasts because of the international fleets.” Despite its stellar record in protecting its reef fish, Palau has found itself in the same position as most developing countries that rely mainly on fish for food: subsidized international fleets operating offshore, in exchange for usually less than 10 per cent of the value of the catch paid to the government, were hauling out tuna, billfish, sharks and other species from their waters faster than they could reproduce.

The result is that in the past half century, the Pacific spawning population of Bigeye tuna, the mainstay of the sashimi industry and the region’s most valuable catch, has been reduced to 16 per cent of its original size. Other species are not faring much better and almost all are in decline.

So soon after he was elected for a third term in 2013, Remengesau floated the idea of banning the international fleets that contribute around 5 million dollars to 6 million dollars a year, about a tenth of its revenues, hoping to somehow make up the shortfall from tourism. This would achieve several goals: create a space for the fish stocks to recover even as they are being fished out everywhere else; increase the catch of the local fishermen and thus strengthen the food security of the country’s 18,000 people; provide visitors with fresh, sustainable seafood, and allow future divers to view in spine-tingling proximity the increasingly rare big sharks, marlin, swordfish and tuna, notably the Bigeye, which can grow to a length of 2.5 meters.

Monitoring the recovery of the stocks in Palau will be far easier than in the world’s other giant marine reserves, all lacking a permanent population or any recreational diving: the U.S. Northwestern Hawaiian Islands, the British Chagos Islands in the Indian Ocean, Kiribati’s Phoenix islands in the Central Pacific and New Zealand’s Kermadec Islands. Of these, only the Phoenix and the Chagos had any significant fishing before they became sanctuaries.

Meanwhile, tourists from China, mostly non-divers, are flocking to Palau in unprecedented numbers, straining the country’s infrastructure. So the government decided to double the 50 dollar fee tourist tax, but opposition remained to giving up the 6 million dollar Japanese purse-seine companies were paying to fish in Palau’s waters. Eliminating the Asian long-line fleets decimating sharks, billfish and tuna that contribute only 400,000 dollars a year in license fees proved popular from the start.

The solution emerged this year: by allowing them to fish in the remaining 20 per cent of Palau’s waters, the country could continue to sell to Japanese purse-seiners its quota of 500 days a year, mostly to Papua New Guinea, and remain a member of the PNA, the Pacific tuna cartel. The sale, at roughly 10,000 dollars a day, however, “is not necessarily guaranteed, as the trading only takes place when there is a demand for days,” noted Transform Aqorau, the chief executive of the PNA, which is based in Majuro, Marshall Islands.

As for the fishing in Palau itself, no foreign long-line vessels will be allowed, only local ones whose catch is consumed locally. And the foreign purse-seiners that set their nets in Palau will only be allowed to do so on free-swimming schools of Skipjack, a fishery that is widely deemed sustainable. Fish-aggregating devices, which unnecessarily haul in 15 per cent of young Bigeye and other unintended fish, turtles and marine mammals, will be banned.

“The future of Palau is really the tourism industry,” said Sengebau. “Now there’s hardly any big Marlins in fishing tournaments any more, but with the sanctuary, we hope they will come back and we can offer catch-and-release big-game fishing.”