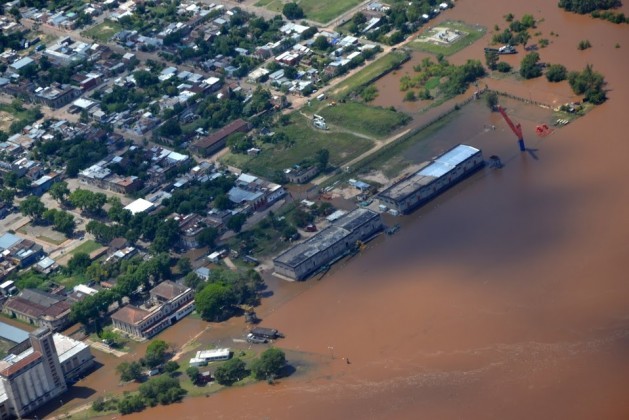 In Uruguay 22,414 people have been displaced by the floods that have affected the countries of the Mercosur trade bloc. Credit: Sistema Nacional de Emergencias (Sinae)

BUENOS AIRES, Jan 4 2016 (IPS) - The flooding that has affected four South American countries has underscored the need for an integrated approach to addressing the causes and effects of climate change.

Above and beyond joint emergency response plans, global warming poses common problems like deforestation and the management of shared rivers.

Some 180,000 people have been evacuated since the worst flooding in years hit the region over the year-end holidays.

The floods caused when the Paraná, Paraguay and Uruguay rivers overflowed their banks did not respect the borders between the nations of the Mercosur (Southern Common Market) bloc, and have brought them together in a shared environmental catastrophe.

The same scenes of flooded streets, rescue teams and evacuation centres have filled the news from the provinces of northeast Argentina, cities in northern Uruguay and southern Brazil, and riverbank communities near the capital of Paraguay.

“There is indifference towards environmental problems in the Mercosur. So much so that a Mercosur summit was held just recently, and this issue, which was a tragedy foretold, was not even addressed.” -- Enrique Viale

“It is difficult to avoid associating the severity of the floods with the modifications that have to do with climate change,” said Jorge Taiana, vice president of Parlasur, the parliamentary institution of the Mercosur bloc, which is made up of Argentina, Bolivia, Brazil, Paraguay, Uruguay and Venezuela.

“A serious joint response by the region is absolutely essential with respect to the two major strategies for confronting climate change, mitigation and adaptation to its effects,” Taiana, a lawmaker from Argentina’s “Front for Victory”, the left-leaning faction of the Justicialista (Peronist) Party, now in the opposition, told IPS.

“There is indifference towards environmental problems in the Mercosur,” Enrique Viale, president of the Argentine Association of Environmentalist Lawyers, told IPS. “So much so that a Mercosur summit was held just recently, and this issue, which was a tragedy foretold, was not even addressed.”

A number of experts have blamed the heavy rainfall on the El Niño-Southern Oscillation (ENSO), a cyclical climate phenomenon that affects weather patterns around the world.

The World Meteorological Organisation (WMO), a specialised United Nations agency, had forecast that its effects would be among the strongest seen since 1950.

On Dec. 24 the U.N. General Assembly urged member states to draw up national and regional strategies to address El Niño’s socioeconomic and environmental impacts, suggesting the implementation of early warning systems and the adoption of prevention, mitigation and damage control measures.

Viale, however, said: “The El Niño phenomenon was announced, but it isn’t the only cause.”

“The four countries (affected by the severe flooding) are the world’s biggest soy producers, along with the United States. It is not just by chance that the map of deforestation caused by soy production coincides with the map of the flooding,” he said.

The U.N. Food and Agriculture Organisation (FAO) reported that Brazil, Paraguay and Argentina were among the 10 countries with the highest levels of deforestation in the last 25 years. Between 1990 and 2015, Argentina lost more than 7.6 million hectares of forest.

In the Misionera or Paranaense jungle, also known as the Mata Atlantica, through which the Uruguay, Paraná and Iguazú rivers run, only seven percent of the original forest cover remains in Argentina, while this ecosystem in Paraguay and Brazil has been almost completely destroyed.

Greenpeace campaign coordinator in Argentina Hernán Giardini said in a statement that “Forests and jungles, besides concentrating considerable biodiversity, play a critical role in climate regulation, maintenance of water sources and flows and soil conservation.

“They are our natural sponge and protective umbrella. When we lose forests we become more vulnerable to heavy rains and run a serious risk of flooding,” the statement by the global environmental watchdog added.

Viale said: “This, added to direct seeding, the method used to plant transgenic soy, has turned the fields into veritable green deserts without any capacity for absorbing water.”

Soy production, which has boomed since 1990, is seen as essential to these South American economies, as soy is one of their chief export products.

As it expanded, soy also replaced other traditional crops, while pushing stockbreeding into marginal areas like jungles and forests.

Argentine environmentalist Jorge Daneri said “The expansion of the agricultural frontier, driven in particular by the expansion of genetically modified soy monoculture, the enormous deforestation of the Paranaense jungle, and the construction of dams on a giant scale by Brazil on the Paraná, Iguazú and Uruguay rivers – with many more under construction or planned – has greatly aggravated the environmental crisis throughout (South America’s) Southern Cone region.”

To address what he described as “regional ecocide,” Daneri, with the Argentine organisation “M´Biguá, Ciudadanía y Justicia Ambiental” (M´Biguá, Citizenship and Environmental Justice), called for the river basin committees of the Paraná, Uruguay and Paraguay rivers to work together.

“There isn’t a single river basin committee that includes the three Argentine provinces in question and the national state, and there is only CARU (the Uruguay River Administrative Commission), which includes Argentina and Uruguay, but not Brazil,” he said.

“This is a serious problem, because of the total lack of coordination,” he said. “We see the river basin committee as the main institution that should be focused on here. It has been clearly demonstrated that Mercosur has failed to play a serious role coordinating proactive, sustainable policies.”

Daneri stressed the urgent need for “a new environmental management and zoning system, and the reestablishment of biological corridors, as well as a system to recuperate riverbank areas through reforestation using native species of trees, and to restore native forests.”

He also proposed a reorganisation of zoning plans in every province, together with the national authorities, as well as environmental assessments of every river basin, at a regional level.

In the short term, Taiana suggested the Parlasur help coordinate contingency plans for those affected by the flooding, and in the longer term, he said local governments should study together construction projects and other initiatives financed by Mercosur.

He pointed out that the bloc has a Structural Convergence Fund to finance projects to improve infrastructure and boost the competitiveness and social development of the member countries.

“The most important aspect of these non-reimbursable funds that facilitate integration is that they acknowledge the asymmetries between member countries,” he said.

Taiana said the fund, of some 100 million dollars a year, could be invested in projects financed in border areas to mitigate or prevent flooding, like dikes or diversion channels.

“It seems to me that there are many common issues that are urgent, where the Mercosur as a whole still has a lot to do,” he said.

Daneri said “The projects needed are not cement works, they are not megadams or megadikes. It’s not about channelising rivers. Only making efforts during an emergency, or for emergencies, is a mistake.”

“Part of meeting this challenge is working towards a transition to leave the current oversimplified model of monoculture behind and moving in the direction of agroecology. The causes need to be addressed,” he added.

“The causes lie in a productive model that does not depend on nature’s cycles but on the cycles of the market, which is devastating for ecosystems,” he said.