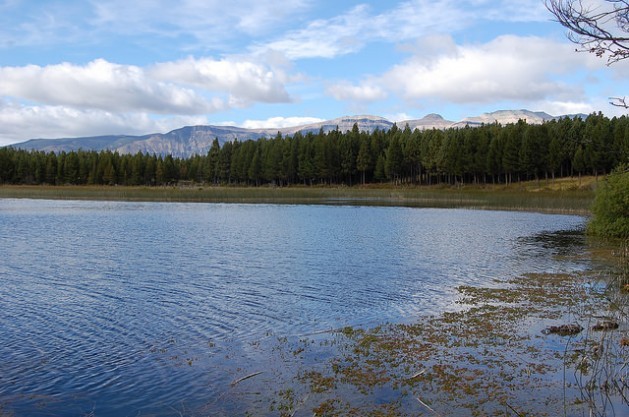 SANTIAGO, Jan 27 2016 (IPS) - The Chilean government’s approval of a hydroelectric dam in the Patagonia wilderness has rekindled the debate on the sustainability and efficiency of large-scale hydropower plants and whether they contribute to building a cleaner energy mix.

“Hydroelectricity can be clean and viable, but we believe every kind of energy should be developed on a human scale, and must be in accordance with the size and potential of local communities,” Claudia Torres, spokeswoman for the Patagonia Without Dams movement, told IPS.

She added that “there are different reasons that socioenvironmental movements like ours are opposed to mega-dams: because of the mega-impacts, and because of the way this energy is used – to meet the needs of the big mining corporations that are causing an environmental catastrophe in the north of the country.”

The movements fighting the construction of large dams in the southern Patagonian region of Aysén suffered a major defeat on Jan. 18, when the plan for the 640 MW Cuervo dam was approved.

This South American nation of 17.6 million people has a total installed capacity of 20,203 MW of electricity. The interconnected Central and Norte Grande power grids account for 78.38 percent and 20.98 percent of the country’s electric power, respectively.

Of Chile’s total energy supply, 58.4 percent is generated by diesel fuel, coal and natural gas. The country is seeking to drastically reduce its dependence on imported fossil fuels, to cut costs and to meet its climate change commitments.

Large-scale hydropower provides 20 percent of the country’s electricity, while 13.5 percent comes from unconventional renewable sources like wind and solar power, mini-dams and biomass.

Chile has enormous potential in unconventional renewable sources. In 2014, the government of Michelle Bachelet adopted a new energy agenda that set a target for 70 percent of Chile’s electric power to come from renewables by 2050.

In terms of water resources, Chile has 6,500 km of coastline, 11,452 square km of lakes, and innumerable rivers.

Aysén, in the extreme south of the country, has abundant water resources – fast-flowing rivers, numerous lakes, and distinctive lagoons. General Carrera Lake, the second-largest in South America after Bolivia’s Titicaca, is found in that region.

To generate hydroelectricity, the authorities and investors have their eyes on the wild rivers of Patagonia, a remote, untamed, unspoiled and sparsely populated wilderness area at the far southern tip of Chile.

But vast segments of civil society reject large hydropower dams, which they consider obsolete and a threat to the environment and to local communities.

However, Professor Matías Peredo, an expert on hydropower at the University of Santiago de Chile, says that thanks to the country’s abundant water resources, hydroelectricity is “one of the energy sources with the greatest potential for development.”

“It’s always good to diversify the energy mix, and well-managed hydroelectricity is quite sustainable,” he told IPS.

The expert argued that a properly managed hydropower dam “is better from an environmental and social point of view than a string of small dams that together provide the same number of MW of electric power.”

“Hydropower generation in Chile depends on demand and the plant’s load capacity….In other words, the plant can only operate with prior authorisation from the Superintendencia de Electricidad y Combustibles (the country’s power regulator), and depending on the availability of water,” he said.

“This combination means the hydroelectric plant operates on and off, thus generating large fluctuations in flow, which is a major stress for the ecosystem,” he said.

The law to reform the energy industry and foment unconventional renewable sources includes in this category hydropower dams of up to 20 MW – in other words, mini-dams.

These include the flooding of large areas of land, which destroys flora and fauna, and the modification of rivers, which causes bioecological damage.

And the negative social impacts of large dams are proportional to the multiple environmental impacts, displacing millions of people: between 40 and 80 million people were forcibly evicted for the construction of large dams worldwide between 1945 and 2000, according to the World Commission on Dams (WCD).

“It is important to diversify the energy mix, for local use, with good support, clean energy sources, and considerably fewer impacts, while strengthening consumption and development in the territories,” said Torres, the Patagonia Without Dams activist, from Coyhaique, the capital of the Aysén region.

“Decentralised power generation is key” to moving forward in terms of clean, sustainable energy, she said, adding that the people of Aysén are seeking to expand the use if wind, solar and tidal power in the region.

Peredo agreed that the decentralisation of power generation is of strategic importance.

“Distributed generation (power generation at the point of consumption) must without a doubt be discussed in this country. It makes a lot of sense for electricity to be produced locally,” he said.

In 2014 the Patagonia Without Dams movement won a major victory when the government cancelled the HidroAysén project, which would have built five large hydropower dams on wilderness rivers in Aysén to generate a combined total of 2,700 MW of energy.

But now the movement was dealt a blow, with the approval by a special Committee of Ministers of the construction of the Cuervo dam – a decision that can only be blocked by a court decision.

The project, developed by Energía Austral, a joint venture between the Swiss firm Glencore and Australia’s Origin Energy, would be built at the headwaters of the Cuervo River, some 45 km from the city of Puerto Aysén, the second-largest city in the region after Coyhaique, for a total investment of 733 million dollars.

The controversy over the plant has heated up because it would be built in the Liquiñe-Ofqui geological fault zone, an area of active volcanoes.

“It poses an imminent risk to the local population,” Torres warned.

Peredo said “the project was poorly designed from the start, and will not be managed well.”

“They failed to take into consideration important aspects, such as the connection of the Yulton and Meullín rivers at some point, which could have disastrous consequences for the ecosystem,” he said.

Opponents of the dam say they will go to the courts and apply social and political pressure, in a year of municipal elections.

“We have one single aim: to keep any dams from being built in Patagonia, and that’s what’s going to happen,” Torres said.