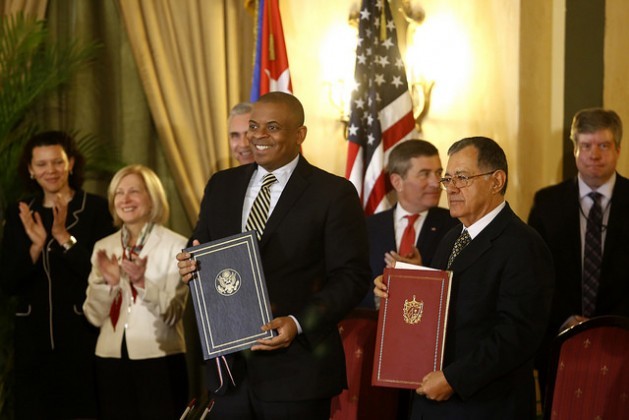 HAVANA, Feb 23 2016 (IPS) - U.S. President Barack Obama and his Cuban counterpart Raúl Castro will go down in history as two statesmen who managed to overcome more than half a century of hostility to bring back together two neighbouring countries with too many shared interests to remain at loggerheads.

When Obama visits Havana on Mar. 21-22, it will be the fourth time he sees Castro in person. But it will be the first time a U.S. president is a guest of the Cuban government since 1928.

In December 2013, they shook hands for the first time in South Africa during the funeral of former president Nelson Mandela. At the time, few imagined that there would be further, less incidental, meetings – let alone that diplomatic ties would be restored and Obama would make an official visit to Cuba.

But diplomats from the two countries had been working behind the scenes since June 2013, with Canada and Pope Francis brokering the efforts, before the two governments surprised the world on Dec. 17, 2014 with the announcement of the decision to reestablish the ties broken off on Jan. 3, 1961.

In 2015 they met on Apr. 11 in Panama, during the Summit of the Americas, and later on Sep. 29 in New York, at the United Nations Conference on Sustainable Development. The latter was the first time the presidents of the two countries met in the United States since the 1959 revolution in Cuba.

In this Caribbean island nation, just 90 miles off the coast of the state of Florida, Obama will find people who admire him – and people who don’t.

Several generations of Cubans have grown up with the anti-imperialist rhetoric according to which the United States is the source of all evil. And although it has been toned down in the last few years, there is still a great deal of scepticism regarding Washington’s “good intentions” with respect to the thaw, or incomprehension as to why the former “enemy” is now a friend.

Independent journalist Miriam Leiva, of the internal opposition, said Obama’s visit is very important. “The Cuban people will receive his message directly. Besides, he’s coming with results; his measures have brought benefits such as an increase in remittances, which improve the lives of many people, not just of those who receive them directly,” she told IPS.

The United States is the main destination of Cuban immigrants, and as a result it is the biggest source of money sent back home to families in Cuba. According to official U.S. figures, nearly two million people of Cuban origin live in that country. Of that total, 1.1 million were born in Cuba and 851,000 were born in the U.S.

This explains why migration was the only issue that brought the two countries to the negotiating table – although not without tension – regularly for years. In these talks, Cuba complained that the 1966 Cuban Adjustment Act, which grants Cuban immigrants U.S. residency one year and a day after reaching the country, encouraged illegal immigration to the U.S. 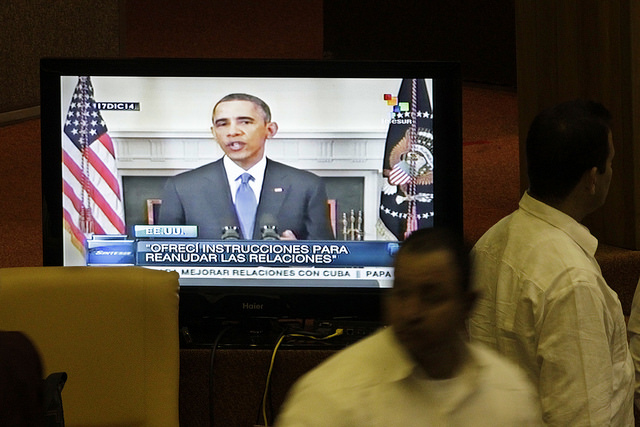 The image of U.S. President Barack Obama on a TV screen in Havana, announcing the restoration of diplomatic ties with Cuba, on Dec. 17, 2014. Now Obama can be seen in person by the people of Havana, when he visits the country Mar. 21-22. Credit: Jorge Luis Baños/IPS

Issues of mutual interest and possible cooperation were discussed in the first contact made to outline the roadmap for the thaw – led by U.S. Assistant Secretary of State for Western Hemisphere Affairs Roberta Jacobson, and Josefina Vidal, director general of the Cuban foreign ministry’s U.S. Division.

The agenda for the normalisation of bilateral ties includes human rights, telecommunications, the fight against drug trafficking, environmental protection, prevention of natural disasters, and combating epidemics, among other areas of mutual interest and possible bilateral cooperation.

A year after the announcement of the restoration of ties, with the two countries’ respective embassies installed in the same buildings they were in before relations were broken off, President Castro publicly summed up what has been done so far and the issues that, in his view, must still be addressed for the complete normalisation of relations.

Among the results, he mentioned the expansion of the already existing cooperation in air security and aviation, and in efforts against drug and people trafficking and immigration fraud, as well as possibilities of cooperation in areas including environmental protection, maritime-port security and health.

Delegations from the two countries are currently working on more complex issues such as mutual compensation, people trafficking and human rights.

With respect to human rights, “we have profound differences and we are holding discussions on the basis of respect and reciprocity,” Castro said.

In a Feb. 20 reference to his upcoming trip to Cuba, Obama said that with Castro “I’ll speak candidly about our serious differences with the Cuban government, including on democracy and human rights.” 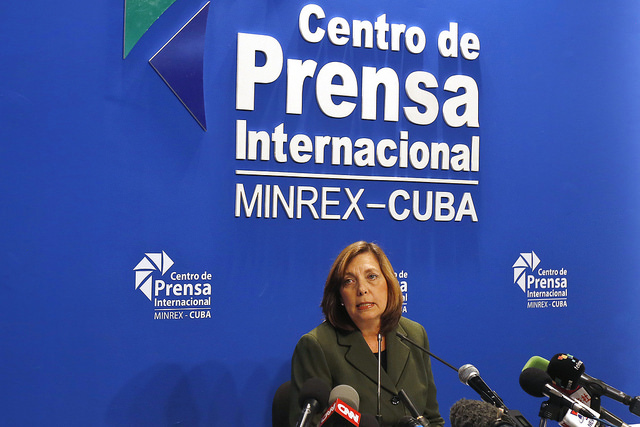 However, on Feb. 18 Vidal said the Cuban government is open to dialogue with the Obama administration on any issue, including human rights, on the basis “of respect, equality, reciprocity and non-intervention in internal affairs.”

In a statement, the White House said that besides holding a bilateral meeting with Castro, Obama would “engage with members of civil society, entrepreneurs and Cubans from different walks of life.”

These are expected to include representatives of dissident movements and the emerging private sector.

In the last 12 months, the governors of several U.S. states have visited Cuba, along with dozens of members of Congress and of the business community.

Government officials who have visited include the secretaries of State John Kerry; of Agriculture, Tom Vilsack; of Commerce, Penny Pritzker; and of Transportation, Anthony Foxx.

And from Feb. 15 to 18, Pritzker hosted Cuba’s minister of foreign trade and investment, Rodrigo Malmierca. During the visit, the two officials stressed their interest in moving forward in the area of bilateral trade, although they recognised that changes are needed in order for this to prosper.

Pritzker said U.S. companies continue to face difficulties in Cuba, such as the requirement that foreign businesses hire Cubans through state organisations, or problems reaching people in the government to discuss business opportunities.

Malmierca, meanwhile, reiterated that the measures taken by Obama to make the embargo more flexible fall short, and said the president has the power to push harder to dismantle the sanctions in place against Cuba since 1960.

And he said the ban on the use of the dollar in financial transactions affects operations with companies from the United States and from elsewhere.

Businessman Gerard Dion, a former U.S. Marine and the author of “Cuba Unchained”, a political thriller that delves into the history of the relations between the U.S. and Cuba, is convinced that Obama knows what political, economic and legal changes must take place to convince Congress that it is time to lift the embargo.

“I’m sure he’ll discuss these things with Raúl Castro and will work hard to reach a mutually beneficial arrangement,” he told IPS by email.