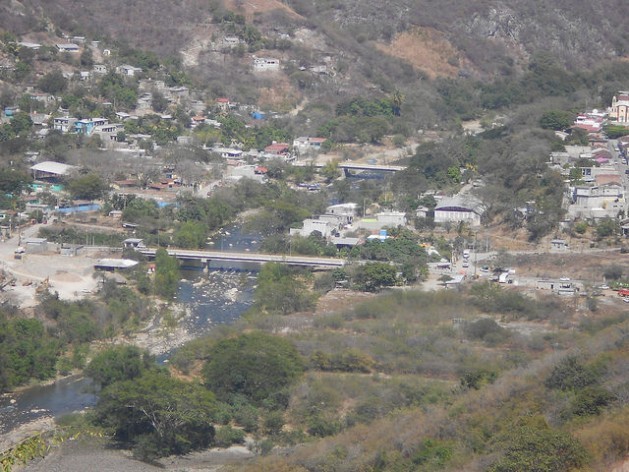 Part of the rural municipality of Chicoasén to be flooded by the second dam built in that area, in the southern Mexican state of Chiapas. A large part of the local peasant farmers are fighting the new hydropower plant, pointing to the damages they say were caused by the Chicoasén 1 dam, built 40 years ago. Credit: Emilio Godoy/IPS

CHICOASÉN, Mexico , Mar 8 2016 (IPS) - In 1976, the construction of a hydroelectric dam destroyed farmland in the rural municipality of Chicoasén in southern Mexico. Forty years later, part of the local population is fighting a second dam, which would deprive them of more land.

“They destroyed everything,” Antonio Herrera, one local resident of this municipality in the state of Chiapas, told IPS. “The land is useless now, it’s impossible to farm it. The dam has affected our lives a great deal.”

Herrera complained that local peasant farmers have been unable to reach their land since Mexico’s state-owned power utility Comisión Federal de Electricidad (CFE) granted a contract in January 2015 for the construction of the Chicoasén 2 dam on the Grijalva River. The project includes a plan to expropriate part of the ejido – formerly public land held in common by the inhabitants of a village and farmed cooperatively or individually.

“We don’t have any information about the hydropower dam. We don’t know what will happen to the people who live along the riverbanks. The CFE says it has permission from the ejidatarios, but we haven’t given them permission. They are basing their arguments on a false (community) assembly, which has signatures from owners who are already dead.” -- Claudia Solís

A huge mechanical shovel digs up sand and gravel while Herrera, a member of the Chicoasén ejido committee, points to the work site in the distance, where the formerly green land is coated by brown.

IPS saw the environmental impact study that the CFE presented to the environment ministry. It states that the total surface area amounts to 234 hectares, 188 of which will be covered by the reservoir, located some 850 km south of Mexico City in this municipality of 5,159 people, the traditional territory of the Nahoa and Zoque indigenous peoples.

The CFE awarded the contract for the construction of the dam to a consortium of three Mexican companies and the Costa Rica-based subsidiary of the Chinese firm Sinohydro. The utility has already expropriated 69 hectares of land for the new dam. The owners of the land were paid 2,300 dollars per hectare.

In 1951, the government granted the local residents 3,400 hectares to create the ejido, which doubled in size in 1986 when they were given another 3,461 hectares. The land is owned by 460 ‘ejidatarios’ or members of the ejido, around 50 of whom have since died and passed on their land to their wives or children.

The first Chicoasén dam, 100 km from the second, expropriated land from the original ejido grant, and the second will take part of the land awarded in 1986.

When the CFE built the 2,400-MW Manuel Moreno Torres dam, better known as Chicoasén 1, in 1976, the company promised to pay for the land and provide piped water, a school and a health clinic.

But these promises were not fulfilled, the ejidatarios complain.

And now they are afraid history will repeat itself.

“We don’t have information about the hydropower dam,” Claudia Solís, the daughter of one of the ejidatarios, told IPS. “We don’t know what will happen to the people who live along the riverbanks. The CFE says it has permission from the ejidatarios, but we haven’t given them permission. They are basing their arguments on a false (community) assembly, which has signatures from owners who are already dead.” Mainly elderly peasant farmers in Chicoasén, in the southern Mexican state of Chiapas, who have land in an “ejido” – formerly public land that was granted to communities to farm individually or cooperatively – take part in a protest against the installation of a second hydroelectric dam in the area, which will affect their farms and their way of life. Credit: Emilio Godoy/IPS

To block construction of the new dam, local residents have held demonstrations, community elders have gone on hunger strike, and legal action has been taken.

But the ejidatarios are divided, because one group supports the new dam.

The opponents are a majority in the community and are led by a group of elders who are dedicating their last remaining energy to defending their land and their way of life, taking to the streets with their canes, their straw ‘sombreros’ and their families.

In December 2014, 62 ejidatarios brought individual lawsuits, which were admitted by a federal judge in October 2015. And in March 2015 they filed a collective lawsuit, which was accepted by another federal judge in May 2015.

But work on the dam has not been brought to a halt.

The local population grows crops like maize, pumpkin, beans, watermelon and melon, fishes in the water of the reservoir and caters to tourists who visit the area.

Chiapas, a supplier of energy

Several large-scale energy projects have been built or are planned by the government or companies in the impoverished state of Chiapas.

Four dams already operating in the state represent 45 percent of the country’s hydroelectricity. Three others also produce energy in what is Mexico’s main river basin.

Construction of the dams has left its mark on local communities and has modified the natural water regimes, led to the loss of vegetation, displaced wildlife and destroyed their habitats, environmentalists and ejidatarios told IPS during the last protest held against the dam and a visit to the affected area.

In Mexico, 13 large hydroelectric dams generate more than 10,000 MW a year, of the total 65,000 MW produced in the country. There is only one new hydropower project in the 2015-2029 National Electric System Development Programme (PRODESEN), launched in July 2015: Chicoasén 2.

The Chicoasén 2 environmental impact study says the dam will directly affect five communities in the municipality and will indirectly affect another 10. It also acknowledges that the dam, the reservoir and the hypdropower plant will hurt the landscape, wildlife and surface drainage.

“We don’t want the dam,” said Herrera, whose family includes four other ejidatarios. “The CFE doesn’t listen to us, it doesn’t take us into account.”

In 2013, the Clean Development Mechanism of the United Nations Framework Convention on Climate Change rejected the inclusion of Chicoasén 2 as a carbon offsetting project, under the argument that there was no clear demonstration of the emissions reduction, which the government estimated at 300,000 tons of carbon dioxide.

Besides the key role it plays in the generation of hydropower, since the 1970s Chiapas has become increasingly important in terms of oil production, and both the state-owned oil giant Pemex and the energy ministry included new fields in the state to be explored or put to tender, in their plans in 2015.

Twenty oilfields are operating in Chiapas, with a total of 278 million barrels of oil in reserves, and an impact on 38 Zoque communities in six municipalities.

And the 2015-2019 Five-Year Plan for the Expansion of the System for the Transportation and Storage of Natural Gas includes the projected 440-km Salina Cruz-Tapachula gas pipeline between the states of Chiapas and Oaxaca, to be completed in 2018, but not yet put out to tender.

A survey carried out in the state by the energy ministry on the impact of oil industry operations on other economic activities found that it hurt agriculture, tourism and archaeological sites, as well as nine large environmental areas.

“Exploration for oil has an impact on forests, water resources, and indigenous communities,” Fabio Barbosa, a professor in the economy department of the Autonomous National University of Mexico, told IPS. “The conflicts that already exist will be aggravated, but oil companies aren’t stopped by social conflicts.”

Barbosa said oil industry plans are unsustainable. “If an important well is developed, environmental disasters created in other states can be repeated,” he warned.

Mexico’s law on fossil fuels, in effect since August 2014 as part of the reform that opened up the oil and power industries to private capital, stipulates that the energy ministry must hold non-coercive negotiations to obtain free, prior and informed consent from indigenous communities when energy projects are to be carried out in their territories.

In addition, companies must present a social impact assessment in order to obtain a permit for their projects.

But these requisites have not been enforced in Chiapas, according to local residents and social and environmental activists.