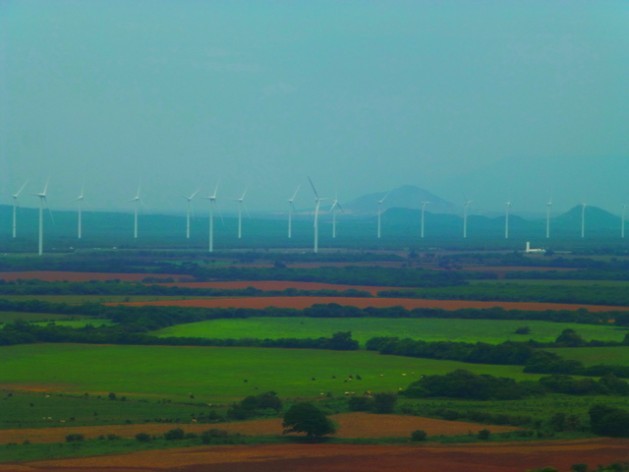 A wind park in the southern Mexican state of Oaxaca, where local communities and indigenous people are fighting the installation of wind turbines in their territory. Credit: Courtesy of the International Service for Peace (SIPAZ)

MEXICO CITY, Jun 3 2015 (IPS) - “It hurts us that our land is affected, and the environmental impacts are not even measured. Wind farm projects affect streams and hurt the flora,” said Zapotec Indian Isabel Jiménez, who is taking part in the struggle against the installation of a wind park in southern Mexico.

The 42-year-old healer says the turbines endanger medicinal plants, which are essential for her traditional healing work in the city of Juchitán in the state of Oaxaca, 720 km south of the capital.

“We are right, we know the truth,” Jiménez told IPS. “That’s why we are resisting this, and exercising our rights.”

The Zapotec indigenous woman is one of the leaders of the opposition to the Energía Eólica del Sur (Wind Energy of the South) company’s plans to build a wind park in the area to generate 396 MW that would feed into regional power grids.

Jiménez belongs to the Asamblea Popular del Pueblo Juchiteco – the Juchiteco People’s Assembly – founded in February 2013 to protect the rights of native communities in the face of the introduction of wind farms in their territories.

They are protesting the ecological, social and economic damage caused by wind parks.

“They threaten us, they insult us, they spy on us, they block our roads. We don’t want any more wind turbines; they have to respect our territory because it is the last land we have left.” – Isabel Jiménez

In addition, they are complaining about incompliance with International Labour Organisation (ILO) Convention 169 Concerning Indigenous and Tribal Peoples, which requires prior, free and informed consent, and the U.N. Declaration on the Rights of Indigenous Peoples, both of which have been ratified by Mexico.

In November an inter-institutional technical committee made up of delegates of local, state and federal governments began a consultation process with regard to the wind park, and decided to conclude the informative phase in April despite the objections raised by local communities, and move on to the deliberative phase to discuss the viewpoints of the different parties.

Local inhabitants worry that the procedure followed will be used as a model for future projects forming part of the country’s energy reform, whose legal framework was enacted in August 2014, opening up electricity generation and sales, including renewables, as well as oil and gas extraction, refining, distribution and retailing, to participation by the domestic and foreign private sectors.

“The problem is that there has been no consultation process to obtain free, prior and informed consent,” Antonio López, a lawyer with the non-governmental Economic, Social and Cultural Rights Project (PRODESC), told IPS. “They are trying to speed up these processes, and the conditions are created to hold a certain kind of consultation process favourable to the projects.”

PRODESC advises local communities in the area in defence of their rights.

On Apr. 24, Zapotec communities filed a lawsuit in federal court against the consultation process that was carried out. The ruling is expected to be handed down shortly.

Juchitán is located in the Isthmus of Tehuantepec, a windy narrow land bridge between the Atlantic and Pacific oceans in Mexico’s southern state of Oaxaca where a large proportion of the country’s wind energy projects are being developed.

The isthmus, which is 200 km wide, is now home to 21 wind farms, including 12 in Juchitán, according to the Mexican Wind Energy Association.

Renewable energies, not including large hydropower dams, account for seven percent of electricity generation in Mexico. Wind power generates 2,551 MW a year, and the plan is to scale that up to 15,000 MW by 2020.

According to the National Institute of Statistics and Geography, there are 11 million indigenous people, distributed in 54 different communities, in this country of 120 million people. But that figure is considered an underestimate because it only includes people over five who speak a native language.

The Isthmus of Tehuantepec is mainly inhabited by Zapotec, Huave, Zoque, Mixe and Chontal Indians.

“There have been many problems with the application of the consultation process, such as a lack of information and attacks on community leaders and rights defenders,” Andrea Cerami, a lawyer with the defence and public policies section of the non-governmental Mexican Centre for Environmental Law (CEMDA), told IPS.

He said that when a state plans infrastructure works or other projects in native territories without due consultation, it violates the rights of communities, which are protected by international treaties and national laws.

Mexico’s laws on fossil fuels and the power industry, which form part of the country’s energy reform, stipulate that local communities must be consulted. But the law on fossil fuels does not offer a way out for the owners of land, who must reach an agreement with the public or private companies in question or accept an eventual court verdict.

Since January, Rarámuri indigenous communities in the northern state of Sinaloa have blocked the construction of a gas pipeline between Sinaloa and the U.S. state of Texas across the border, until a consultation process is carried out to obtain their free, prior and informed consent.

The Yaqui Indians in the northern state of Sonora are likewise fighting the Acueducto Independencia, a pipeline that has carried water from Sonora to the northern city of Hermosillo since March 2013, despite several victories in court by the native communities.

In Oaxaca, Mixe indigenous groups had to go to federal court to see their right to consultation enforced before the National Water Commission, with respect to the use of wells on their land.

“They threaten us, they insult us, they spy on us, they block our roads,” complained Jiménez, who has practiced traditional healing since 1993. “We don’t want any more wind turbines; they have to respect our territory because it is the last land we have left.”

Energía Eólica del Sur has a history of conflicts. Until 2013 the company was named Mareña Renovables, which tried to build a 396 MW wind farm in the town of San Dionisio del Mar, on Oaxaca’s Pacific coast.

But the wind park, with a projected investment of 1.2 billion dollars, including 75 million from the Inter-American Development Bank (IDB), has been stalled since 2013 as a result of court verdicts in favour of the local communities that would have been affected. As a result, Energía Eólica del Sur decided to move to Juchitán.

In December 2012 the international Indian Law Resource Center filed a complaint on behalf of 225 inhabitants of seven indigenous communities with the IDB’s Independent Consultation and Investigation Mechanism (ICIM), regarding the loan.

In September 2013, the IBD’s Panel of the Compliance Review Phase admitted the complaint. It has been investigating the case since December 2014, in order to draw up a report and proceed to oversee compliance with its provisions.

“This is an opportunity to make sure people are informed in the future,” López said. “We want to give the legal system a chance to respect human rights.”

“Already existing social and environmental conflicts can be exacerbated, and they can escalate in intensity and trigger other kinds of actions,” he said. “The consultation is a mechanism for dialogue that should favour broad participation and help parties with different interests reach understandings.”