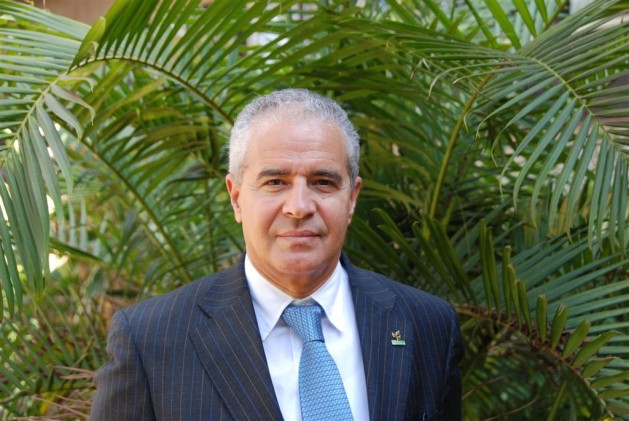 The beauty of the Paris agreement is that it’s a universal agreement, unlike the Kyoto protocol, said Ambassador Djoghlaf. Credit: Ahmed Djoghlaf.

UNITED NATIONS, Apr 26 2016 (IPS) - The 134 members of the Group of 77 and China (G-77) made their mark on the Paris Climate Change Agreement and should now adopt a program of action to implement it, Ambassador Ahmed Djoghlaf told IPS in a recent interview.

Djoghlaf, of Algeria, was co-chair of the Ad Hoc Working Group on the Durban Platform for Enhanced Action (ADP), together with Daniel Reifsnyder, of the United States, a position which allowed him to “witness very closely” the negotiation of the Paris Agreement.

“As the co-chair of the preparatory committee I can tell you that the G-77 has been a major actor during the  negotiation and a major player for the success of the Paris conference,” said Djoghlaf.

Djoghlaf said that the Group of 77 and China made its mark on the Paris agreement by mobilising a diverse range of countries and sub-groups, to “defend the collective interests of the developing countries.”

He also said that the group fought for equity, response measures, loss and damage as well as means of implementation, including financing, capacity building and transfer of technology.

“Those that are suffering the most nowadays are those that have less contributed to climate change crisis and they are using their own limited financial resources to address them, to adapt, to adjust to the consequences created by others,” he said.

Program of Action in Marrakech

“I hope that the G-77 through the leadership of Thailand will be able to take the lead and submit to its partners at the next conference of the parties in Marrakech a draft work program on capacity building for the implementation of the Paris agreement,” said Djoghlaf.

The 22nd meeting of the Conference of Parties (COP22) to the UN Framework Convention on Climate Change (UNFCCC) will be held in Marrakech, Morocco, from 7 to 18 Nov. 2016.

Djoghlaf said the program should address North-South as well as South-South capacity building, which is needed to ensure that developing countries can implement their commitments including on issues related to the finalisation of their nationally determined contributions and preparation of their future contributions.

“It would be important for the developing countries to be able to identify their own capacity building needs and let others do it for them. It will be also important to have a framework to coordinate the South-South cooperation on climate change similar to the Caracas Plan of Action on South-South Cooperation or the Buenos Aires Plan of Action on economic and technical cooperation among developing countries,” he said.

“Within the G-77, the diverse group, you have emerging countries that are now leaders in renewable energy and the energy of tomorrow and the they have I think a responsibility to share their experience and to allow other countries from the same region and the same group to benefit from their experience,” he said.

"It is crystal clear that the Paris agreement will enter into force well before the original expected date of 2020. The clock is ticking and we cannot afford any delay” -- Ambassador Ahmed Djoghlaf

“I also believe that time has come for the G-77 to initiate it’s own program of action on climate change,” he said.

Djoghlaf said that developing countries need capacity building to ensure that they can continue to participate fully in the implementation of the Paris Climate Change Agreement.

Unlike developed countries, which “have fully-fledged ministries dealing with climate change,” he said, “In the South there is not a single country that has a Minister of Climate Change.”

He spoke about how during the negotiations of the Paris agreement many countries of the South had only one focal point and yet sometimes there were 15 meetings taking place at the same time and the meetings also often continued into the night.

It can be difficult for this focal point “to be able to understand and to participate, let alone be heard” when there is a “proliferation of simultaneous meetings,” he said.

Djoghlaf said that countries of the South could help address this disparity by establishing national committees, which include representatives from a number of different ministries.

“There’s not a single sector of activities which is not nowadays affected by the negative impact of climate change,” said Djoghlaf.

“All the sectors need to be engaged and we will succeed to win the battle of climate change when all these ministers, economic ministers and social ministers, will be fully integrating climate change in their planning and in their decision making processes,” he said.

Djoghlaf acknowledged it’s not easy for ministers in developing countries to engage because they have other urgent priorities. “They tend not to see the importance of the impact of climate change because they believe that this is not a priority for them,” he said. Yet there is often evidence that supports a more cross-cutting approach. For example, said Djoghlaf, World Health Organization research, which shows that 7 million people die from air pollution every year, demonstrates that climate change should also be a priority for health ministries.

The beauty of the Paris agreement

“We need a North-South and a South-South global climate solidarity,” said Djoghlaf.

He described the success of the signing ceremony held here Friday, where in total 175 countries signed and 15 countries deposited their instruments of ratification as “unprecedented”. “This has never happened before,” he said, referring to the developing countries, which also ratified the agreement. “It is a resounding political message and a demonstration of leadership,” he said. “It is crystal clear that the Paris agreement will enter into force well before the original expected date of 2020. The clock is ticking and we cannot afford any delay.”

Djoghlaf also said that he was not concerned about upcoming changes to the United States domestic political situation.

“When you are a party to the Paris agreement you can’t withdraw before three years after its entry into force. In addition I do believe that this historical agreement is in the long term interest of all Parties including the United States of America” he said.

“I believe that this Paris agreement is in the long term strategic interests of every country,” in part because eventually fossil fuel energy is going to disappear.

Investment in renewable energy was six times higher in 2015 than in 2014, he added.

“We tend to ignore the tremendous impact and signal the Paris agreement has already been providing to the business community,” he said.

Another part of the Paris agreement which Djoghlaf is happy about is what he describes as a “fully-fledged article on public awareness and education.”

“It’s to ensure that each and every citizen of the world, in particular the developing countries, are fully aware about the consequences of the climate change and the need for each of us as an individual to make our contribution to address the climate change,” he said.

“There is a need also to educate the people of the world of the need to have a sustainable lifestyle this throw away society can not continue to exist forever and we need to establish a sustainable pattern of production and consumption,” said Djoghlaf.

However Djoghlaf, who was the Executive Secretary of the Convention on Biological Diversity, said that he was concerned that the negotiations in 2015 didn’t adequately reflect the importance of ecosystems and biodiversity.

“Healthy biodiversity and healthy ecosystems have a major role to play to combat climate change,” said Djoghlaf, adding that 30 percent of carbon dioxide is absorbed by forests and 30 percent by oceans.