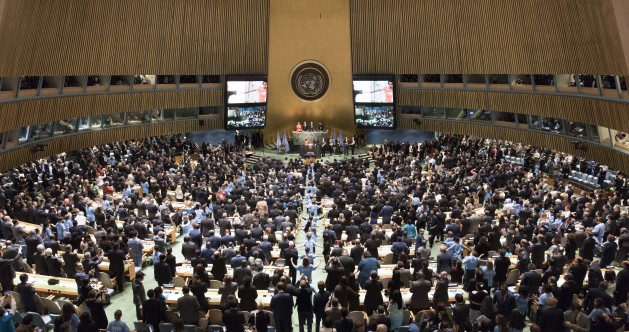 The Marshall Islands, Nauru, Palau, Somalia, Palestine, Barbados, Belize, Fiji, Grenada, Saint Kitts and Nevis, Samoa, Tuvalu, the Maldives, Saint Lucia and Mauritius all deposited their instruments of ratification at the signing ceremony, meaning that their governments have already agreed to be legally bound by the terms of the treaty.

Speaking at the opening of the signing ceremony UN Secretary General Ban Ki-Moon welcomed the record-breaking number of signatures for an international treaty on a single day but reminded the governments present that “records are also being broken outside.”

Ban urged all countries to have their governments ratify the agreement at the national level as soon as possible.

In order for the Paris agreement to enter into force it must first be ratified by 55 countries representing 55 percent of global emissions.

The 15 developing countries who deposited their ratifications Friday only represent a tiny portion of global emissions but include many of the countries likely to bear the greatest burden of climate change.

For the treaty to move ahead it is important that some of the world’s top emitters ratify as soon as possible. However unlike in the past, the world’s top emitters now include developing countries, including China, India, Brazil and Indonesia. For these countries, addressing climate change can also help other serious environmental problems including air pollution, deforestation and loss of biodiversity.

According to the World Health Organization air pollution causes millions of deaths every year.

“Air pollution is killing people every day,” Deborah Seligsohn, a researcher specializing in air pollution in China and India at the University of California at San Diego told IPS.

Sunil Dahiya, a Climate & Energy Campaigner with Greenpeace India told IPS that “pollution control measures for power plants, a shift to renewables, more public transport and cleaner fuels as well as eco-agriculture, would not only clean up the air but also reduce our emissions.”

Brazil and India have also found their way into the list of top emitters in part due to deforestation. Peat and forest fires in Indonesia, exacerbated by last year’s severe El Nino, contributed to a spike in global carbon emissions. However while these environmental problems occur in developing countries, the global community also has a responsibility to help address them.

While both developed and developing countries have responsibilities to reduce their emissions, David Waskow, Director of the International Climate Action Initiative at the World Resources Institute (WRI) said that an equitable approach among countries must take into account several factors.

“Questions of equity are threaded through out” the Paris agreement and that these take into account the respective capabilities of countries and their different national circumstances, said Waskow.

Heather Coleman Climate Change Manager at Oxfam America said that the conversation around equity shifted during negotiations in Paris.

“We moved away from talking about rich versus poor countries and the conversation started really evolving around poor versus rich people around the world,” said Coleman.

According to Oxfam’s research, the richest 10 percent of the world’s population are responsible for over half of the global emissions, said Coleman.

“Putting the burden on rich people around the world is where we need to be moving,” she said.

The WRI has developed a climate data explorer which compares countries not only on their commitments, but also their historic emissions and emissions per person, two areas where developed countries tend to far exceed developing countries.

One area that developed countries are still expected to take the lead is in climate finance said Waskow. Finance commitments will see richer countries help poorer countries to reduce their emissions. Financing could potentially help countries like Brazil and Indonesia address mass deforestation while a new Southern Climate Partnership Incubator launched at the UN Thursday will help facilitate the exchange of ideas between developing countries to tackle climate change.

Financing should also help vulnerable countries to better prepare for and adapt to the impacts of climate change, however Coleman told IPS that the Paris agreement lacks a specific commitment to adaptation financing, and that this omission should be addressed this year.

Despite the records broken at the signing ceremony here Friday Coleman also said it was important to remember that the national commitments made by countries are still “nowhere near enough” to avoid catastrophic climate change.

“We really need to look towards a two degree goal but we need to stretch to 1.5 if we are going to see many vulnerable communities (continue) their very existence,” she said.

Some of the communities most vulnerable to climate change include small island countries and indigenous communities.

For island countries, already threatened by increasingly severe and frequent cyclones and rising sea levels, coral bleaching is a new imminent threat likely to effect the economies which rely on coral reef tourism.

Indigenous communities are also losing their homes to deforestation and have become targets for violence because of their work defending the world’s natural resources.

According to Global Witness at least two people are killed each week for defending forests and other natural resources from destruction, and 40 percent of the victims are indigenous.

Only 21 countries referred to the involvement of indigenous people in their Intended Nationally Determined Contributions (INDCs) submitted as part of the Paris agreement, Mina Setra an Indigenous Dayak Leader from Indonesia said at an event at the Ford Foundation ahead of the signing ceremony.