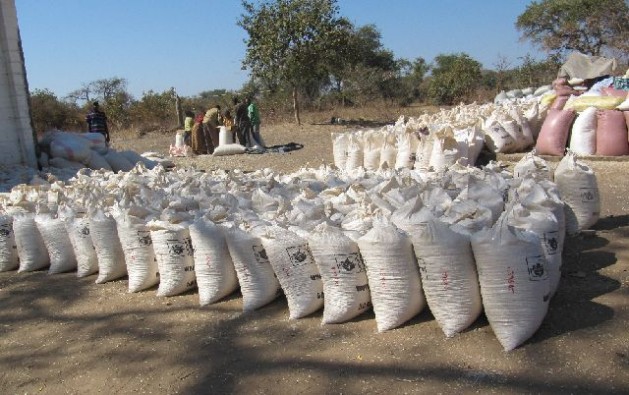 LIVINGSTONE, Zambia, Apr 29 2016 (IPS) - ‘No Farmer, No Food’ is an old slogan that the Zambia National Farmers’ Union still uses. Some people consider it a cliché, but it could be regaining its place in history as agriculture is increasingly seen as the answer to a wide range of the world’s critical needs such as nutrition, sustainable jobs and income for the rural poor.

According to the United Nations Food and Agriculture Organisation (FAO), agricultural investment is one of the most important and effective strategies for economic growth and poverty reduction in rural areas where the majority of the world’s poor live. Available data indicates that Gross Domestic Product (GDP) growth in agriculture is at least twice as effective in reducing poverty as growth originating in other sectors.

Armed with this evidence, the world’s development trajectory is focusing on how the sector can boost the fight against hunger and extreme poverty—two of the major obstacles to achieving sustainable development. And the upcoming 6th World Farmers’ Organisation General Assembly slated for May 4-7 in Zambia is set to be dominated by, among other things, agricultural investment and market linkages.

"We should use the gathering to solicit for ideas and investments to improve the agricultural value chain as government sets agriculture as the mainstay of the economy." -- WFO President Evelyn Nguleka

Under the theme ‘Partnerships for Growth’, the conference is poised to deliberate on ways to encourage farmer-centered partnerships and investments aimed at improving the economic environment and livelihood of this group of producers, most of whom live in rural areas.

FAO estimates that an additional investment of 83 billion dollars will be needed annually to close the gap between what low- and middle-income countries have invested each year over the last decade and what is needed by 2050.

But for developing countries like Zambia, where would this kind of investment come from?

Evelyn Nguleka, president of the Zambia National Farmers’ Union (ZNFU), believes hosting this year’s event is an opportunity for Zambia to market itself as a preferred agricultural investment destination.

“We have the land, water, human resource and good climate which supports the growing of all kinds of agricultural produce,” Dr. Nguleka told IPS. She added that the hosting of the WFO General Assembly comes at a crucial time for Zambia, which has suffered one of the worst droughts induced by the El Nino weather phenomenon sweeping across Southern Africa.

“It is a critical point in our agricultural development that we should use the gathering to solicit for ideas and investments to improve the agricultural value chain as government sets agriculture as the mainstay of the economy,” said the ZNFU president, who is also the current World Farmers’ Organisation (WFO) president.

Highlighting the challenge of market access and poor mechanisation, Nguleka is hopeful that Zambia would use the platform to learn from countries that have mechanised and are now reaping the benefits.

“As you are aware, majority producers are smallholders most of whom are women. Women are not only farmers but also home managers, and to balance these two duties requires some basic mechanisation to reduce time spent in the fields,” she said, highlighting the importance of women to agricultural development.

But for Green Living Movement, a member of the Zambia Alliance for Agroecology and Biodiversity Conservation, the conference should ensure that the voice of smallholder farmers – usually marginalised at such big events – is heard loud and clear.

“We welcome the theme, which is timely. But we say no to one-sided partnerships that seemingly favour the bigger corporations while the smallholder farmers lose out,” said Emmanuel Mutamba, director of Green Living Movement and Chairman of the Alliance for Agroecology and Biodiversity Conservation.

Mutamba said WFO should guard against selfish corporate interests whose agenda is largely driven by profit. “Climate change is here to stay. We call upon our representatives at this conference to seriously consider the plight of smallholders who produce 75 percent of the country’s food requirements and are at the frontlines of climate change effects. Sustainable technologies must be sought for their continued productivity, or else whatever partnerships emerge would not make sense without production,” Mutamba told IPS, highlighting the importance of tackling climate change.

And in adding value to the win-win approach being advocated for, the Cultivate Africa’s Future (CultiAF) Project on reducing post-harvest losses of fish in Western Zambia could be a perfect example.

After introducing fishers to efficient post-harvest handling technologies, the project has moved to fund business ideas meant to up-scale workable technologies whose findings are a result of joint efforts between fishers and researchers through a Participatory Action Research (PAR) approach.

Jonathan Tambatamba, director of Programmes at the ATDF Entrepreneurship Hub (AEH), a private company contracted by IDRC to implement the commercialisation project, said, “The project seeks to move away from the ‘business as usual’ approach of using communities for commercial interests, after which they are dumped without a sustainability plan.”

Apart from entrepreneurship training, three novel and creative business ideas would be picked and supported with a 5,000-dollar grant each, addressing some of the noted challenges in the (CultiAF) PAR process – financial sustainability and poor market access.

And for 35-year-old fish trader Joyce Inonge Nang’umbili, the idea of having access to reliable markets built around the local business value chain could be close to a miracle. “For some of us who have taken up salting as the best option for fish processing, we desire proper market access of salted fish which is not widely known by most consumers in Zambia,” she said.

As WFO representatives gather in Livingstone, many hope they will be drawn not only to farmer centered policies that address market linkages, but also responsible agricultural investments, with serious implications for the fight against climate change threatening the very existence of humanity and attainment of the Sustainable Development Goals (SDGs) as espoused in the UN 2030 agenda.