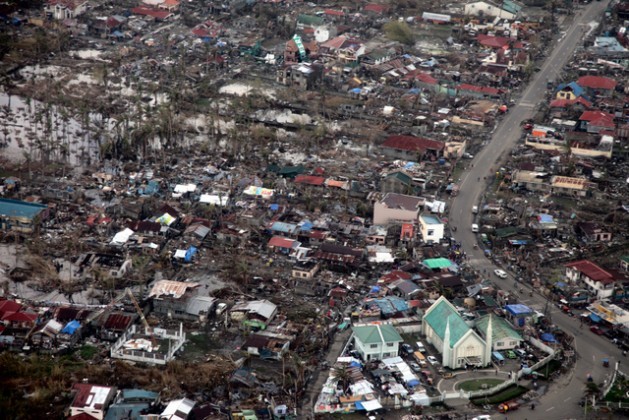 Tacloban, in the Philippines, one of the areas hit hardest by super typhoon Haiyan in November 2013. The disaster coincided with the COP19 climate talks and served as the backdrop for negotiations on mechanisms of damage and losses. Credit: Russell Watkins/Department for International Development

SAN JOSE, May 20 2016 (IPS) - As the Global South works to overcome a history of weak institutions, armed conflict and poverty-driven forced exodus, key causes of its humanitarian crises, developing countries now have to also fight to keep global warming from compounding their problems.

“Disaster Risk Reduction and climate change adaption in fragile and conflict-affected states in the Global South have long been overlooked, as it is often perceived as too challenging or a lower priority,” Janani Vivekananda, an expert in security and climate change, told IPS.

Vivekananda, the head of Environment, Climate Change and Security in International Alert, a London-based non-governmental organisation working to prevent and end violent conflict around the globe, cited her country, Sri Lanka, as an example of problems shared by developing countries.

“Given the fragile political situation since 25 years of violent conflict ended in May 2009, ensuring that climate impacts do not fuel latent conflict dynamics is critical,” she said from London.

A politically unstable developing island nation like Sri Lanka, and many other countries in the South, will see their problems multiply in a warmer planet with higher sea levels, she said.

“Climate change is the ultimate ‘threat multiplier’: it will aggravate already fragile situations and may contribute to social upheaval and even violent conflict,” says “A New Climate for Peace”, an independent report commissioned in 2015 by members of the Group of Seven (G7) wealthiest nations.

This is the challenge faced by the governments and organisations that will attend the first World Humanitarian Summit to be held May 23-24 in Istanbul. The conference was convened by United Nations Secretary-General Ban Ki-moon, “to generate strong global support for bold changes in humanitarian action.”

At the summit, the delegates will search for ways to integrate the traditional conception of humanitarian emergencies with new crises, such as those caused by climate change, which this year caused record high temperatures.

“This is why the World Humanitarian Summit’s initiative to remake the humanitarian system is so timely and so important,” said Vivekananda.

The Intergovernmental Panel on Climate Change (IPCC) estimates that in the absence of policies that effectively curb greenhouse gas emissions, global temperatures will rise by four degrees Celsius by 2100.

And even if the world were to reach the “safe limit” for global warming – a rise of 1.5 to 2.0 degrees C, the target agreed in the Paris Agreement in December – the effects would still be felt around the planet, warns the IPCC, which decided in April to prepare a special report on the impacts of global warming of 1.5 degrees Celsius.

The landmark climate deal is one of the key elements that the national delegations will have when they reach Istanbul, along with the 2030 Agenda for Sustainable Development, agreed in September, and the Sendai Framework for Disaster Risk Reduction 2015-2030, agreed in March 2015. 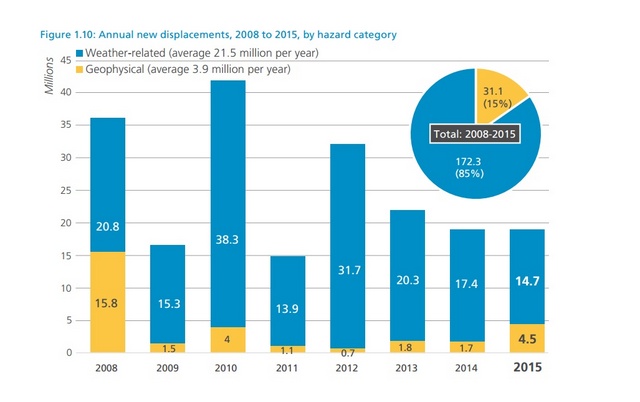 More people were displaced worldwide in 2015 by weather-related hazards than by geophysical events. Credit: IDMC 2016 report

“Explicit recognition of the linkages between different types of risks and vulnerabilities is still missing,” said Vivekanada, with regard to the not yet formalised connection between these two agreements and the World Humanitarian Summit.

The 17 Sustainable Development Goals (SDGs) forming part of the 2030 Agenda are essential for understanding the relationship between climate change and humanitarian assistance.

The report commissioned by the G7 says the poorest countries with the most fragile political systems, like Iraq, the Democratic Republic of Congo or Haiti face the greatest risks and difficulties adapting to climate change.

Climate pressure could hurt food production or require extra aid for local governments overwhelmed by the situation. In extreme circumstances, these phenomena can lead to forced migration.

The report also stressed the impact of the El Niño Southern Oscillation (ENOS) meteorological phenomenon and said that for the people most exposed and vulnerable to extreme rainfall and temperatures, the effects have been devastating and have caused displacement.

For example, El Niño caused intense drought along Central America’s Pacific coast and in particular in the so-called Dry Corridor, a long, arid stretch of dry forest where subsistence farming is predominant and rainfall shrank by 40 to 60 percent in the 2014 rainy season.

“Hundreds of people were forced to leave Nicaragua because of the drought,” Juan Carlos Méndez, with Costa Rica’s National Commission for Risk Prevention and Emergency Management (CNE), told IPS.

As a CNE official, Méndez is also an adviser to the Nansen Initiative, an inter-governmental process to address the challenges of cross-border displacement in the context of disasters and the effects of climate change.

“This is where we see the biggest political and technical challenges. You can clearly associate displacement with a natural disaster like an earthquake or a hurricane, but now we have to link it to climate change issues,” the expert said.

Partly for that reason, Costa Rica and another 17 countries launched the Geneva Pledge for Human Rights in Climate Action in February 2015, a voluntary initiative to get human rights issues included in the climate talks.

In the final version of the Paris Agreement, the concept was incorporated as one of the principles that will guide its implementation.

The simultaneous inclusion of climate change and its humanitarian impacts in international summits is not new, but is growing.

The backdrop to the climate talks at the 19th United Nations Climate Change Conference in November 2013 in Warsaw was the devastation wrought by Super Typhoon Haiyan in Southeast Asia, and in the Philippines in particular.

The human impact of the typhoon, which claimed 6,300 lives, intensified the talks in the Polish capital and prompted the creation of a mechanism to address climate change-related damage and losses.

A scientific study published in January this year found that the Philippines would experience the highest sea level rise in the world, up to 14.7 mm a year – nearly five times the global average.

“Which is why it is very urgent for the Philippines to beef up efforts on disaster preparedness, particularly in the communities with high risk for disasters and high poverty incidence,” Ivy Marian Panganiban, an activist with the Caucus of Development NGO Networks (CODE-NGO), told IPS.

Along with six other Filipino institutions, CODE-NGO is calling for locally-based humanitarian emergency response, with an emphasis on local leadership, and hopes Istanbul will provide guidelines in that sense.

NGOS “should really be capacitated and involved in the governance process since they are the ones that are in the forefront – people who are actually affected by disasters,” she said from Manila.