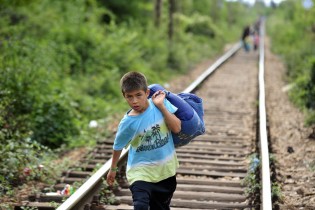 By Baher Kamal
Children are being smuggled, sexually abused, maimed, killed for their vital organs, recruited as soldiers or otherwise enslaved. Not only: 69 million children under five will die from mostly preventable causes, 167 million will live in poverty, and 263 million are out of school. And 750 million women will have been married as children by 2030.

By Baher Kamal
“Xenophobic and racist rhetoric seems not only to be on the rise, but also to be becoming more socially and politically acceptable.” The warning has been heralded by the authoritative voice of Mogens Lykketoft, current president of the United Nations General Assembly, who on World Refugee Day on June 20, reacted to the just announced new record number of people displaced from their homes due to conflict and persecution.

By Baher Kamal
Will the rapid--though silent escalation of political tensions between the European Union and Turkey, which has been taking a dangerous turn over the last few weeks, push Ankara to drop a “human bomb” on Europe by opening its borders for refugees to enter Greece and other EU countries?

By Baher Kamal
Big business is most often seen by human rights defenders and civil society organisations as “bad news,” as those huge heartless, soulless corporations whose exclusive goal is to make the biggest profits possible. Too often and in too many cases this is a proven fact.

The Humanitarian Clock Is Ticking, The Powerful Feign Deafness

By Baher Kamal
The humanitarian clock is now ticking away faster than ever, with over 130 million of the world’s most vulnerable people in dire need of assistance. But the most powerful, richest countries—those who have largely contributed to manufacturing it and can therefore stop it, continue to pretend not hearing nor seeing the signals.

By Baher Kamal
The World Humanitarian Summit (WHS) held in Istanbul on May 23-24, managed to send a strong wake-up call to the world about the unprecedented human suffering now in course, but failed to achieve the objective of attracting the massive funds needed to alleviate the humanitarian drama, as none of the leaders of the Group 7 of the richest countries nor of the five permanent members of the UN Security Council attended, with the exception of the German Chancellor Angela Merkel.

Humanitarian Summit: Too Big to Fail?

By Baher Kamal
With a line up of heads of state or government telling all what they did to alleviate human suffering and promising to do more, along with leaders of civil society and humanitarian organisations denouncing lack of honest political will to act while governments continue spending trillions of dollars in weapons, the two-day World Humanitarian Summit kicked off today May 23 in Istanbul.

Humanitarian Summit Aims to Mobilise Up to 30 Billion Dollars

What do Aid Organisations Want from the Humanitarian Summit

By Daphne Davies
The UN World Humanitarian Summit takes place in Istanbul, 23-24 May. So what hopes do the humanitarian organisations, which deliver aid on the ground, have for the outcomes?

When Emergencies Last for Decades

By Lyndal Rowlands
For the millions of people whose lives have been uprooted by conflict and natural disasters the average amount of time before they can return home is now 17 years.

By Baher Kamal
“We cannot keep jumping from crisis to crisis. We have to invest in long-term development that helps people cope with shocks so that they can continue to grow enough food for their communities and not require emergency aid.”

By Baher Kamal
It is true that millions of refugees, especially in Africa and the Middle East, reside in camps. But in all they represent only one-quarter of the total number of refugees. Meanwhile, more than 1 in 2 of all the world’s refugees live in slums or in informal settlements and on the fringes of cities, in overcrowded neighbourhoods and in areas prone to flooding, sanitation hazards and diseases.

Never have human beings reached such staggering levels of suffering. Millions of refugees, migrants and forcibly displaced persons are now innocent victims of conflict and violence. Climate change has increased the suffering, with hundreds of thousands of people fleeing droughts, floods, lost harvests and famine. This site is dedicated to IPS reports on this dramatic, unprecedented human emergency, including IPS special coverage on the occasion of the World Humanitarian Summit held on 23-24 May in Istanbul.