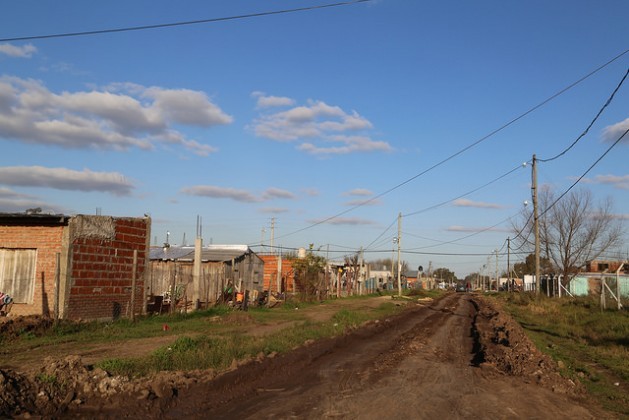 A street in Hornos, a low-income neighbourhood on the west side of Greater Buenos Aires, where local residents are waiting to receive the deeds to their property, as the key to access to other rights and public services that will provide them with a dignified urban life. Credit: Fabiana Frayssinet/IPS

MORENO, Argentina, Jul 28 2016 (IPS) - Now that the wind no longer blows her roof off and her house belongs to her, Cristina López feels safe in the shantytown where she lives on the outskirts of the Argentine capital. But she and her neighbours still need to win respect for many more rights they have been denied.

She is not complaining because her situation was much more difficult before she and her teenage son moved four years ago to Hornos, a newly emerging neighbourhood in the municipality of Moreno, to the west of Buenos Aires.

She paid rent until the municipal authorities granted her a plot of land where she built a makeshift home. “Since I built it by myself it wasn´t stable, and a storm tore the roof off,” López told IPS. After that, she and her son stayed at the homes of various friends and neighbours.

Her new house was built with the help of Techo (Roof), a non-governmental organisation that promotes decent housing in urban slums and shantytowns throughout Latin America and the Caribbean, with a collaborative effort by local residents and volunteers.

“The market for land is an imperfect market that reproduces inequalities in access to land because it is in the hands of a small minority focused on generating profits and not on the common good.” - Juan Pablo Duhalde

In Hornos, home to 200 families, and the adjacent neighbourhood of Los Cedros, where 1,200 families live, Techo Argentina has built 225 small one-family units. Simple and low-cost, they are put together in just two days, with the aim of resolving housing emergencies.

But for the 59-year-old López, who does odd jobs to support herself and her 15-year-old son, the little prefab house has meant the difference between indigence and a dignified life.

“It was a total change. Nothing compares to this. You realise that when you have a house, you start to change your way of life, because you know it’s your own, and although I don’t have the ‘papers’ for this land yet, the house is mine. No one will take it from me,” she said.

The papers she mentioned are the property deed that she is to be issued by the municipal authorities who granted her the plot of land; not having received them yet makes her nervous.

“There´s always some shrewd person who will show up and claim the land is theirs. Until the municipality says ‘this belongs to you’, we won´t feel completely secure,” she said.

López added that in order to stop being a “second-class citizen”, she also needs utilities: running water, sewerage and electricity with a meter “so it isn’t cut off all the time.”

Furthermore, Hornos, 42 km from the capital and over 20 from the county seat, means she is far away from everything. “We have no school or health clinic nearby, no paved roads, and ambulances won´t come here – we need everything,” she said.

“It is acknowledged that rights are violated in many areas, and slums are the main expression of inequality and the violation of rights,” Techo Argentina regions director, Francisco Susmel, told IPS.

“Without secure ownership they have no guarantee that they won’t be evicted, and that they can go ahead and improve their homes and their surroundings,” he said, adding that it also undermines their right to access to public services.

Among the issues found by a 2013 survey carried out by Techo Argentina in 1,834 slums home to a total of 432,800 families in the biggest cities in the country was the right to land – a problem common to shantytowns around Latin America.

“Land is a factor that conditions inequality because today it is in the hands of a select group of people and isn´t available to the rest of the population,” sociologist Juan Pablo Duhalde, director of Techo International´s social research centre, told IPS.

“When we´re talking about urban land, we are referring to the basic foundation of the city…where the streets and blocks are laid out, and which requires the presence of grids (water, power and sewage, etc),” Bagnera, an architect who is an expert in urban planning and urban poverty at Argentina’s National University of the Litoral, told IPS.

“The value of land is directly related to location (near or far), provision (or absence) of services and infrastructure, and environmental characteristics (which lead to varying levels of exposure to risk),” she added.

For example, the construction of developments like gated communities in suburban areas in Argentina in the 1990s drove up prices of land on the outskirts of cities that until then was inhabited by the poor and was worth very little.

This has become one of the decisive elements in the habitat of low-income segments of the population in large cities, as they are pushed farther and farther to the outskirts or packed more and more densely into existing slums in the cities themselves, Bagnera said.

She pointed, for example, to slums that grow “upwards” in large cities like Buenos Aires, and to soaring property sale and rental prices in those areas.

“With regard to Latin America, to conditions in the slums, when the market makes decisions about the distribution of land, we are governing ourselves in an inefficient manner with no proper view to the future,” said Duhalde.

The expert said the right to access to urban land should be one of the central issues of debate at the third United Nations Conference on Housing and Sustainable Urban Development (Habitat III), to be held in the capital of Ecuador in October, which is to give rise to a New Urban Agenda.

“The market for land is an imperfect market that reproduces inequalities in access to land because it is in the hands of a small minority focused on generating profits and not on the common good,” said Duhalde.

“A variety of institutions are needed, in the government, the social sector, academia, different interest groups, to be part of the equitable distribution of resources, in this case land, which we must remember has a social function. It is not merchandise.”

Bagnera proposes increasing the value of urban land through the incorporation of infrastructure and improvements.

“That means the generation of community organisation processes through housing cooperatives, groups or social organisations that undertake their own processes of urbanisation and provision of infrastructure on collectively-acquired areas of land,” she said.

“And fundamentally with the participation of the state, promoting inclusive policies of access to services, and contributing to the generation of public-private urban planning arrangements,” she said.

These policies “tend to reduce the costs of infrastructure, providing public land, or based on the production of urban land by the state itself,” she added.