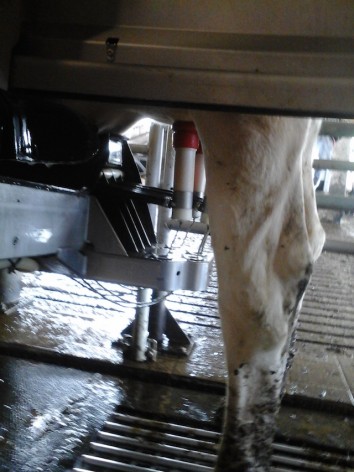 A cow being milked by a milking robot. Photo courtesy of Cornelia Flatten.

BONN, Germany, Aug 23 2016 (IPS) - She is only 24 and already running her father’s farm with 110 milking cows. Cornelia Flatten sees herself as a farmer for the rest of her life.

“It’s my passion,” says the young German. “It is not just about the money but a way of life. My dream is to grow this farm and transform it to improve efficiency by acquiring at least two milking robots.”

A graduate with a degree in dairy farming, Cornelia believes agriculture is an important profession to humanity, because “everyone needs something to eat, drink, and this requires every one of us to do something to make it a reality.”

Simply put, this is a clarion call for increased food production in a world looking for answers to the global food problem where millions of people go hungry. And with the world population set to increase to over nine billion by 2050, production is expected to increase by at least 60 percent to meet the global food requirements—and must do so sustainably.

While it is unanimously agreed that sustainability is about economic viability, socially just and environmentally friendly principles, it is also about the next generation taking over. But according to statistics by the Young Professionals for Agricultural Development (YPARD), agriculture has an image problem amongst youth, with most of them viewing it as older people’s profession.

For example, YPARD says half of farmers in the United States are 55 years or older while in South Africa, the average age of farmers is around 62 years old.

This is a looming problem, because according to the Global Forum on Agricultural Research (GFAR), over 2.5 billion people depend on agriculture for their livelihoods. In addition, for many regions of the world, gross domestic product (GDP) and agriculture are closely aligned and young farmers make considerable contributions to the GDP from this sector. For example, in sub-Saharan Africa, 89 percent of rural youth who work in agriculture are believed to contribute one-quarter to one-third of Africa’s GDP.

Apart from increasing productivity, leaders are tasked to find ways of enticing young people into agriculture, especially now that the world’s buzzword is sustainability.

“It’s time to start imagining what we could say to young farmers because their concern is to have a future in the next ten years. The future is smart agriculture, from manual agriculture, it’s about producing competitively by not only looking at your own farm but the larger environment—both at production and markets,” said Ignace Coussement, Managing Director of Agricord, an International Alliance of Agri-Agencies based in Belgium.

Speaking during the recent International Federation of Agricultural Journalists (IFAJ) Congress discussion on sustainable solutions for global agriculture in Bonn, Germany, Coussement emphasised the importance of communication to achieve this transformation.

“Global transformation is required and I believe communication of agricultural information would be key to this transformation to help farmers transform their attitude, and secondly push for policy changes especially at government level,” he said.

According to the United Nations Food and Agriculture Organisation (FAO), creating new opportunities and incentives for youth to engage in both farm and non-farm rural activities in their own communities and countries is just but one of the important steps to be taken, and promoting rural youth employment and agro-entrepreneurship should be at the core of strategies that aim to addressing the root causes of distress of economic and social mobility.

Justice Tambo, a Senior Researcher at the Centre for Development Research of the University of Bonn (ZEF), thinks innovation is key to transforming youth involvement and help the world tackle the food challenge.

With climate change in mind, Tambo believes innovation would help in “creating a balance between production and emission of Green House Gases from Agriculture (GHGs) and avoid the path taken by the ‘Green Revolution’ which was not so green.”

It is for this reason that sustainability is also linked to good governance for there has to be political will to tackle such issues. According to Robert Kloos, Under Secretary of State of the Germany Federal Ministry of Food and Agriculture, “It is true that people are leaving their countries due to climate change but it is not the only problem; it is also about hunger…these people are starving. They live in rural underdeveloped areas of their countries.”

“Good governance is a precondition to achieving sustainability,” he adds, saying his government is working closely with countries in regions still struggling with hunger to support sustainable production of food.

Alltech, a global animal health and nutrition company, believes leadership has become a key ingredient more than ever to deal with the global food challenge.

“Business, policy and technology should interact to provide solutions to the global food challenge of feeding the growing population while at the same time keeping the world safe from a possible climate catastrophe,” said Alltech Vice President, Patrick Charlton.

Addressing the IFAJ 2016 Master class and Young Leaders programme, Charlton added that “If the world is to feed an increased population with the same available land requires not only improved technology, but serious leadership to link policy, business and technology.”

But for Bernd Flatten, father to the 24-year-old Cornelia, his daughter’s choice could be more about up-bringing. “I did not pressure her into this decision. I just introduced her to our family’s way of life—farming. And due to age I asked whether I could sell the farm as is tradition here in Germany, but she said no and took over the cow milking business. She has since become an ambassador for the milk company which we supply to,” said the calm Flatten, who is more of spectator nowadays on his 130-hectare farm.

It is a model farm engaged in production of corn for animal feed, while manure is used in biogas production, a key element of the country’s renewable energy revolution. With the services of on-farm crop management analysis offered by Dupont Pioneer, the farm practices crop rationing for a balanced biodiversity.

But when all is said and done, the Flattens do not only owe their farm’s viability to their daughter’s brave decision to embrace rural life, but also her desire to mechanise the farm with smart equipment and technology for efficiency—an overarching theme identified on how to entice youths into agriculture.