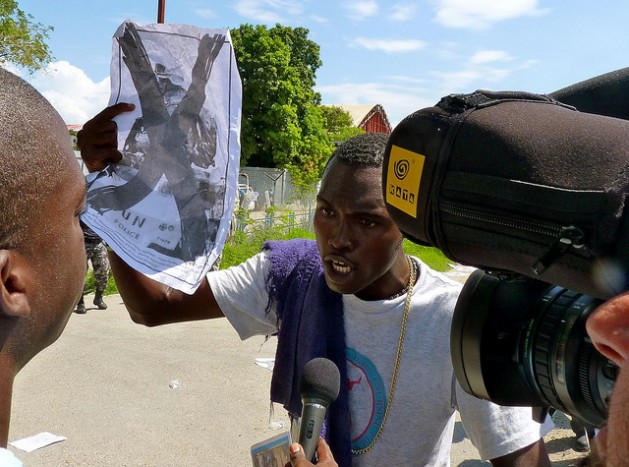 A demonstrator holds up an anti-U.N. poster during a protest outside a UN base in Port-au-Prince, Haiti. Credit: Ansel Herz/IPS

NEW YORK, Aug 18 2016 (IPS) - Update: On Thursday 18 August the United States Court of Appeals for the Second Circuit upheld the immunity of the UN from legal proceedings in the case of Georges et al v. United Nations et. al (the Haiti Cholera case) in accordance with the UN Charter and other international treaties.

Six years since UN peacekeepers brought cholera to Haiti, the United Nations has finally accepted a greater degree of responsibility for its role in causing the outbreak, which has claimed tens of thousands of lives, and affected hundreds of thousands more.

“The UN has become convinced that it needs to do much more regarding its own involvement in the initial outbreak and the suffering of those affected by cholera,” Deputy Spokesperson for the UN Secretary-General, Farhan Haq said in a statement shared with IPS.

The UN is working “towards a significantly new set of UN actions,” details of which will be released in the coming two months, said Haq.

“This is a groundbreaking first step towards justice,” said Beatrice Lindstrom Esq., lawyer for victims of cholera in Haiti and Staff Attorney at the Institute for Justice and Democracy Haiti (IJDH) in response to the change in the UN’s position.

However she tempered her statement by saying that “the real test is in what comes next.”

“It is heartbreaking that we have to pour so much energy into holding the UN to its own principles, but I think part of why it’s worthwhile, in addition to its supporting victims, is the fact that ultimately I think what we end up with is a stronger institution,” -- Beatrice Lindstrom.
“The UN must follow this announcement with action, including issuing a public apology, establishing a plan to provide compensation to the victims who have lost so much, and ensuring that cholera is eliminated in Haiti through robust investment in water and sanitation infrastructure. We will keep fighting until it does.”
“Promises will not stop cholera’s killing or compensate for the damage to poor families in Haiti,” she said.

As well as representing victims, IJDH, in partnership with the Bureau des Avocats Internationaux (BAI) in Haiti, has spearheaded a global campaign calling on the UN for a just response, criticizing Ban Ki-moon for a lack of decisive leadership on this issue which, it says, undermines the ethics of peacekeeping.

After years of denial and claims of immunity from the UN, the admission comes in the wake of new evidence, arising from an audit undertaken by the UN’s internal watchdog, the Office of Internal Oversight Services (OIOS). It shows that the Stabilization Mission in Haiti (MINUSTAH) has, as recently as 2015, been pouring inadequately-treated sewage into canals, among other negligent practices.

Experts believe cholera was introduced to Haiti in 2010 by peacekeepers from Nepal, when infected sewage leaked into the Arbonite River. The stabilization mission was part of efforts to help after the devastating earthquake in Haiti in 2010, which killed 220,000 people.

Latest studies suggest 30,000 people have died from cholera in Haiti alone, and that over 2 million have survived the disease, far exceeding more often-quoted statistics of 9202 deaths and 754,735 people affected.

There have been numerous calls, within the United States, the United Nations, and in the international community, for the UN to take responsibility for its alleged negligence in allowing Peacekeepers from Nepal carrying Cholera to bring it to Haiti where the disease was not previously endemic.

The issue has come up in the race to select the next Secretary-General of the United Nations. Certain candidates for the position of Secretary General had already made statements in favour of issuing apologies to victims, reflecting a growing tide of opinion that the United Nations could not continue to leave this issue unaddressed.

“I believe the integrity of the United Nations… has actually been tarnished,” said Costa Rican candidate Christiana Figueres at the televised Al Jazeera debate on July 12. “I hope that I will have the chance to apologise to Haiti,” she later told IPS.

The far more contentious issue of whether the UN will pay victims compensation remains unanswered. Lawyers at IJDH are currently awaiting US judges’ decision after the plaintiffs’ case was heard on 1 March 2016, before the United States Second Circuit Court of Appeals.

Lindstrom argued that UN immunity, as set out under the Convention on the Privileges and Immunities of the United Nations (1946), is breached by its failure to “make provisions for appropriate modes” of settling claims arising from its tortious – wrongful – acts. Under the Status of Forces Agreement (SOFA) the United Nations Stabilization Mission in Haiti needed to establish an independent Standing Claims Commission for victims, which it has not done.

There is, Lindstrom told IPS, “a very clear reciprocal obligation to ensure that there’s some other way of handling this.”

By contrast with other instances of malpractice, such as cases of sexual exploitation and abuse, “the cholera case is in many ways a huge outlier,” Lindstrom said, since the UN had hitherto refused to “come to the table” on this issue.

This public admission is therefore significant, but, as Lindstrom urges, the UN’s response is still shy of the recourse to justice that victims sorely need: the issuing of a public apology; a coherent plan to provide reparations; a genuine commitment to eradicating cholera in Haiti; and, finally, the establishment of a formal commission to process victims’ claims that will outlast this issue.

“It is heartbreaking that we have to pour so much energy into holding the UN to its own principles, but I think part of why it’s worthwhile, in addition to its supporting victims, is the fact that ultimately I think what we end up with is a stronger institution,” Lindstrom said.

The changed position from the office of the UN Secretary-General, as reported by Jonathan Katz in the New York Times, comes after the office received a draft report on cholera in Haiti from the Special Rapporteur on Extreme Poverty and Human Rights, New York University law professor Philip Alston, which is likely to be released in late September.

Should the UN be found responsible for paying compensation to cholera victims in Haiti, it is likely that UN member states will be responsible for footing the bill. As the biggest contributor to the UN’s budget, this burden would fall back on the United States, whose courts are currently considering the case.

US Senators, including Democrat Edward J. Markey and Republican Marco Rubio are among those calling for the UN to take responsibility.

In a statement issued Thursday, Markey, a member of the US Foreign Relations Committee said, “after nearly six years of denial, the UN’s admission of culpability in the deadly Haitian cholera outbreak is an important first step towards reinstating trust with the Haitian and global community.”

“But true accountability will only come with substantial assistance from the United Nations to support the development of solutions that prevent disease transmission and provide treatment for the thousands of people suffering from this deadly scourge.”