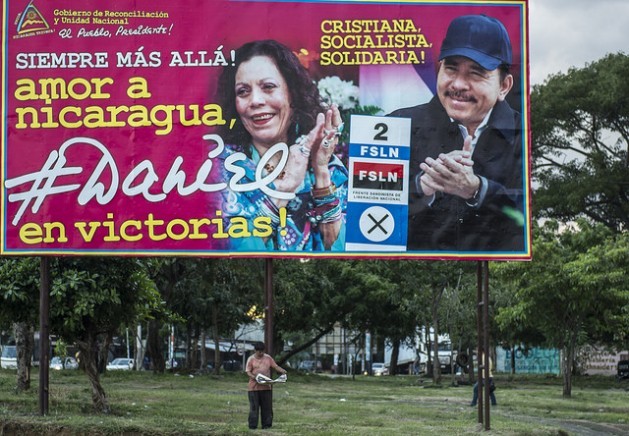 MANAGUA, Nov 3 2016 (IPS) - In the midst of unusual political tension and apathy, Nicaraguans will go to the polls on Sunday Nov. 6 to vote in elections marked by the absence of the main opposition force and international election observers.

The governing Sandinista National Liberation Front (FSLN) dominates the country’s public institutions, in alliance with the main economic powers and backed by the police and military.

The leftist FSLN is the lone major party in the elections. And this is the party’s seventh consecutive nomination of 70-year-old former Sandinista guerrilla leader President Daniel Ortega, and his third run since he won the 2006 elections with 38 percent of the vote.

“There is no election spirit, people are not talking about the process, there was no debate among candidates, there are no proposals for solving the most pressing problems that the country faces, the electoral authorities have had no credibility since 2008.” -- José Dávila

The opposition argue that the modification of the constitution by the judicial and electoral authorities to allow indefinite presidential re-election was illegal.

If Ortega wins, as projected by the polls, he will govern until 2021, completing 15 consecutive years in power since taking office in 2007.

He had already governed the country between 1979 and 1990, after the FSLN revolution overthrew dictator Anastasio Somoza, the last of the Somoza dynasty. In the 1980s the country was rocked by the war waged against the government by the U.S.-armed and -financed “Contras”.

Political scientist José Antonio Peraza told IPS “we have not experienced a political situation as serious as this one” since the FSLN and Ortega lost their political and military power in the 1990 elections, following a decade of civil war.

In his view, this electoral process is not only unusual due to the electorate’s lack of interest, but also “because the political system has been structured for the elections in such a way that the only options left are the governing party and five or six small parties authorised by the electoral tribunal in view of their slim chances of winning.”

“The FSLN made sure to remove any real political options, disqualifying the chief opposition party and replacing it with a pro-government group, with unknown candidates and no proposals for change,” said Peraza.

In August, the electoral tribunal banned the Independent Liberal Party (ILP) – the main opposition party that heads a coalition against the FSLN – from participating in the elections. It also dismissed 28 liberal deputies from Nicaragua’s congress, who acted as a counterweight to the Sandinista majority.

In addition, in a move that has caused much concern that the country will end up under another dictatorship and governing dynasty, Ortega named his wife, Rosario Murillo, as his vice presidential running-mate, and placed his children in strategic public posts.

“Many adversaries to the party are calling the process an electoral farce and I honestly cannot disagree with them in disregarding this situation as illegitimate. The FSLN vetoed outside monitors from overseeing the elections and removed the main opposition parties,” said the political analyst.

Recently Ortega partially reversed its ban on outside monitors, accepting a team of observers from the Organisation of American States (OAS).

The administration also “controls the electoral structures accused of election fraud since 2008 and uses the power of the public institutions to campaign with state resources,” said Peraza.

IPS sought an opinion within the FSLN’s campaign team, but received no response to the request for an interview in over a week.

José Dávila, a political analyst and election monitoring expert, told IPS that in the more than 100 elections that he has observed and studied in different countries around the world in the last 20 years, he has not seen an election like this one.

“There is no election spirit, people are not talking about the process, there was no debate among candidates, there are no proposals for solving the most pressing problems that the country faces, the electoral authorities have had no credibility since 2008,” when the opposition and observers denounced fraud in the municipal elections.

“The campaign has only been seen in government media outlets and there has not been a single formal communication to the people about how the election is going.”

Dávila said that if he “had to compare it with other electoral processes, I would say that this election looks more like the grey processes carried out in Eastern Europe during the Cold War or the polls in Cuba, where there is no real opposition to the government party.”

According to Dávila, there are other elements that turn the process into a “pressure cooker” similar to the atmosphere seen during the 1980s crisis.

“The United States has denounced political irregularities committed by Ortega’s government in Nicaragua and is threatening to pass a law to cut loans to the country if the aspects that Washington questions are not resolved,” said Dávila.

He was referring to the threat posed by the Nicaragua Investment Conditionality Act (NICA), which was passed unanimously Sep. 21 by the U.S. House of Representatives, and now has to make it through the Senate before being signed into law by President Barack Obama.

The initiative aims for Washington to veto any loan programme or grant for projects in this Central American country, alleging that the government in Managua violates the human and political rights of Nicaraguans.

Nicaragua, a country of 6.1 million people, 47 percent of whom are poor, depends on international aid and soft loans to sustain its economy.

A U.S. blockade would cost Nicaragua 250 million dollars annually in loans according to the World Bank, at a time when its main ally, Venezuela, is in crisis.

For similar reasons, the OAS requested a dialogue with Nicaragua to address complaints by human rights organisations, political parties and civil society institutions.

The government has accepted the proposal and an OAS commission will participate in a dialogue with government authorities, political parties, media and civil society organizations, planned for the day before elections.

“In a political maneuver, the government is attempting to legitimate its electoral process, while its adversaries will take advantage of the opportunity to show all the anomalies and institutional abuses by President Ortega’s government, and I can’t see the OAS’ current authorities endorsing a dubious electoral process like the one that is taking place in Nicaragua,” said Dávila.

Unlike other elections when political parties campaigned in public squares and toured through the main cities, this year there were just small rallies held by groups that support the government and demonstrations by the opposition to protest what they call an “electoral farce.”

Against this backdrop, six national political parties and one regional will be running in the elections for president, vice president, national deputies and representatives to the Central American Parliament, with the government urging people to participate and the opposition calling on voters to abstain, in order to make a statement on the illegitimacy of the elections.

In the polls, the FSLN has 60 percent support.

The party first emerged as a political-military movement in July 1961, to overthrow the Somoza family that governed Nicaragua since the 1930s. It seized power in 1979, following a bloody civil war that then continued until 1990.