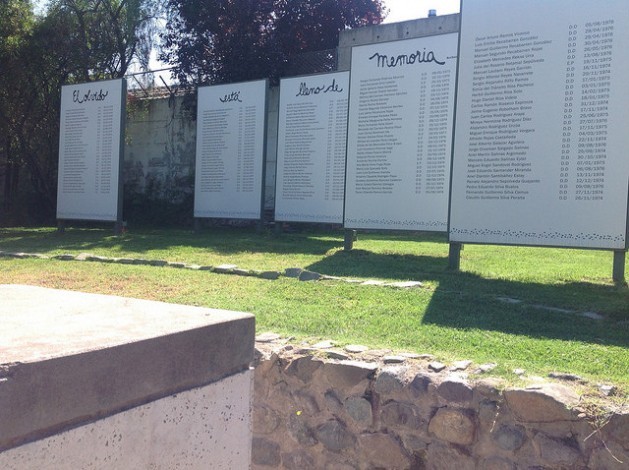 About 20,000 people a year visit the Villa Grimaldi Park for Peace, built in the foothills of the Andes mountains, where the city of Santiago lies, from the ruins of what was the biggest torture centre during Augusto Pinochet’s dictatorship. Credit: Orlando Milesi/IPS

SANTIAGO, Dec 8 2016 (IPS) - After 26 years of democratic governments, Chile has finally passed a law that defines torture as a criminal act, but which is still not sufficient to guarantee that the abuses will never again happen, according to human rights experts.

On Nov. 11, President Michelle Bachelet enacted a law that typifies torture, cruel, degrading and inhuman treatment as crimes, in what she described as “a decisive step in the prevention and total eradication of torture” in Chile.

“It is good that this law has been enacted and that torture can be prevented at a national level, which is what the United Nations demands. But for us this doesn’t mean anything,” Luzmila Ortiz told IPS.

Ortiz’s husband, sociologist Jorge Fuentes, was a leader of the Revolutionary Left Movement (MIR). He was detained in Paraguay in May 1975 and handed over in September of that year to the National Intelligence Directorate (DINA), the Augusto Pinochet military dictatorship’s (1973-1990) secret police.

"To fully recognise the phenomenon of torture as a serious crime to be eradicated and punished with sentences proportionate to its gravity is part of the state’s obligation to not repeat these acts in the future." -- Nelson Caucoto

DINA repatriated him to Chile, where he was tortured and later “disappeared” in January 1976 under Operation Condor, a plan involving the coordination between the military dictatorships in Argentina, Bolivia, Brazil, Chile, Paraguay, Peru and Uruguay to track down, kidnap, torture, transfer across borders, disappear and kill opponents of the regimes such as guerrilla fighters, political activists, trade unionists, students, priests or journalists.

“They destroyed our lives, because this is a wound that will not close until we know what happened to him. This is terrible, and it not only hangs over me but over my son as well,” Ortiz said.

She recalled with sorrow that in Villa Grimaldi, a notorious torture centre, “they subjected him to atrocities. He was confined to a dog house. It is a pain so profound that you can’t get over it.”

For Cath Collins, director of the Diego Portales University’s Transitional Justice Observatory, the new law is welcome, but “no law can, by itself, guarantee that these things will never again happen.”

“To that end, efforts are needed in many areas, including a change in the institutional culture and day-to-day practices of the armed forces, police, prison guards and other state entities,” she said.

“Never again” was a demand set forth by groups of victims of human rights violations in the “Truth and Reconciliation” report drafted in 1991, a year after Chile’s return to democracy.

The report stated that reconciliation is impossible unless the truth comes out about every case, in order to avoid a repeat of human rights abuses. 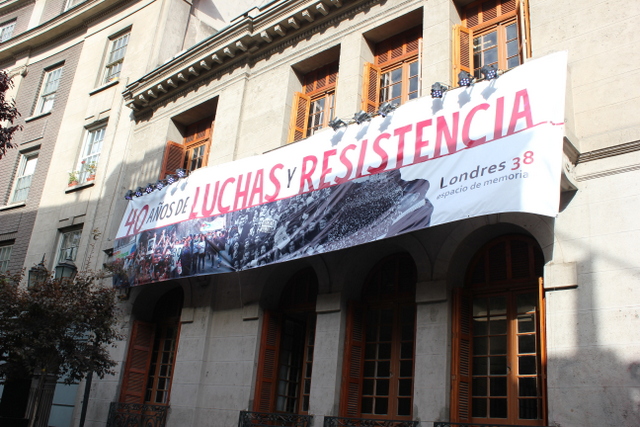 Approximately 2,000 people were tortured in Londres 38 between October 1973 and January 1975. In the building, there are plaques with the names of the 98 people murdered and disappeared there. Credit: Courtesy of Memory Space Londres 38

Collins said that, to make progress towards the eradication of torture, “we have to eliminate every vestige of tolerance or normalisationof actions of brutality, incidental or systematic, and break the culture of denial and impunity.”

However, she cautioned, “institutional interventions are not enough.”

“The authorities as well as civil society also have to educate and educate ourselves, in favour of ethics and respect, and against authoritarianism, arrogance, verbal and physical violence that often invades our
social interactions and day-to-day relationships,” said the expert.

President Bachelet was herself a victim

Socialist President Michelle Bachelet, who governed Chile between 2006 and 2010, before beginning her second term in 2014, was also a victim of Augusto Pinochet’s dictatorship. Her father, Chilean Air Force General Alberto Bachelet, who opposed the 1973 military coup, died in March 1974 in a prison in Santiago of a heart attack caused by torture, according to the official ruling issued in 2012.

After her father’s arrest and death, Bachelet and her mother, Ángela Jeria, went into hiding until they were detained and taken to Villa Grimaldi in 1975, before being forced into exile. Bachelet returned to Chile in 1979 and in 2002 became the first female defence minister in Latin America.

Despite its limitations, the law enables Chile to present itself as a country that has accomplished this task, on Dec. 10 when Human Rights Day is celebrated. This year’s theme is “Stand up for someone’s rights today” – a reference to the need for everyone to play an active role in defending the rights of others – part of the new ethics that have to be promoted in this country, said Collins.

Nelson Caucoto, a human rights lawyer who has defended many victims of the dictatorship, says the new law that typifies torture “provides better protection for fundamental rights.”

“Every measure that entails the advancement, recognition, protection and guarantee of human rights helps build the edifice of ‘nunca mas’ (‘never again)’ To fully recognise the phenomenon of torture as a serious crime to be eradicated and punished with sentences proportionate to its gravity is part of the state’s obligation to not repeat these acts in the future,” he told IPS.

He added that “the issue of torture and its victims in Chile has been one of the poor cousins in the struggle to enforce human rights with respect to the dictatorship. Pinochet was arrested in London for (cases linked to) torture, but in Chile there were no legal proceedings against him for torture,” he said.

In 2004, the National Commission on Political Imprisonment and Torture classified more than 40,000 Chileans as victims of this crime.

But human rights organisations say the figure is much higher. They estimate that half a million Chileans were victims of torture during the dictatorship, Caucoto said.

According to official figures, 2,920 people were killed in the political violence during the military dictatorship, including 1,193 who were “disappeared”, while 40,280 were tortured and one million fled into exile. Of the disappeared, the remains of 167 have been identified, according to the forensic medicine institute.

For Leopoldo Montenegro, member of the Londres 38 Memory Space, which was another major detention and torture centre, the new legislation is of utmost importance.

But in his opinion, “the state has failed to take strong decisions with respect to issues such as justice, restitution, compensation and measures to ensure non-repetition.”

Montenegro told IPS that while the new law has a preventive effect, in order to guarantee that the abuses will never again be committed, the most important element is justice. This means “that the courts must admit the charges of torture filed by the victims and punish the perpetrators. In that sense, there have only been symbolic rulings,” he said.

Two verdicts that stand out were handed down by Judge Alejandro Solís in cases involving 23 survivors of Villa Grimaldi, which has been turned into a Park for Peace and Memory, and 19 survivors of Tejas Verde, another illegal detention centre.

Caucoto hailed Bachelet’s announcement of the creation of a National Mechanism for Prevention of Torture, “which is required by the Optional Protocol to the Convention against torture and other cruel, inhumane or degrading treatments or punishment.”

“Its creation is important because in Chile there is no body with the necessary powers to prevent torture. It has to be noted as a great advance,” he said.

Montenegro, meanwhile, advocated the adoption of measures to create the conditions to ensure that the abuses will never again occur, and complained about the state’s lack of will “to carry out public policies of justice with respect to crimes committed during the dictatorship.”

Collins said that what is needed is “a cultural shift and a change of mindset with respect to eliminating the acceptance of inflicting violence or tolerating passively that it be inflicted on our behalf. It doesn’t matter whether it is the political opponent of the past or the alleged ‘criminal’ of today.”

An annual report by the Ministry of the Interior’s Human Rights Programme pointed out that as of Dec. 1, 2015 there were 1,048 human rights cases in the courts.

Of the 1,373 former agents of the dictatorship facing prosecution, 344 have been convicted, 177 are serving prison sentences – 58 with benefits – and six are on parole.

Meanwhile, Luzmila Ortiz continues to face the trauma of her past and to deal with the psychological problems suffered by her son, who is now 45. “He was two and a half years old when he witnessed my detention (when agents of the regimebroke into their house searching for her husband) after being separated from his father. He has been affected since then,” she said.

Her case, dismissed by the Chilean justice system, is now pending in the Inter American Court of Human Rights “where there are many other legal proceedings and there is practically no hope.”

“There are always legal mechanisms to protect the perpetrators,” she lamented, arguing that “the crucial thing is to do away with the protection that the torturers still enjoy.”