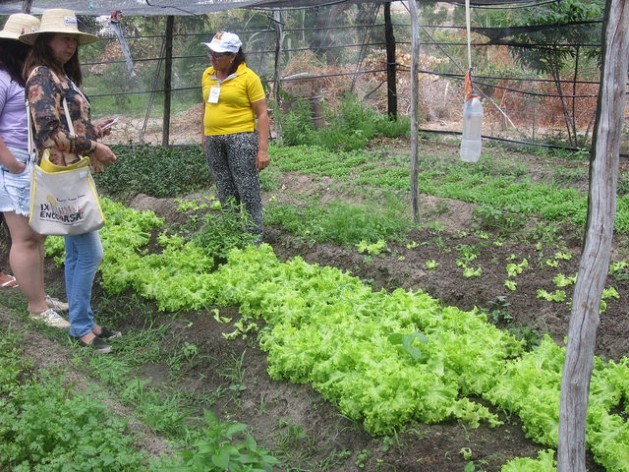 “This vegetable garden changed my life,” said Rita da Silva (right, in yellow), in the Primeiro do Maio village, where some 65 families live. A group of women organised to collectively grow vegetables and fruit to sell in the market in Caraúbas, a nearby city in Northeast Brazil. Credit: Mario Osava/IPS

CARAÚBAS, Brazil, Dec 20 2016 (IPS) - “The vegetable garden changed my life,” said Rita Alexandre da Silva, in the village of Primeiro do Maio where 65 families have obtained land to grow crops since 1999, in this municipality in the state of Rio Grande do Norte, in Northeast Brazil.

She is part of the Group of Women that organised in 2001 and adopted the slogan “United to overcome”, with the goal of having their own productive activities, reaffirming their rights and combating sexism.

“I used to only stay at home or in the fields, I wasn’t allowed to go out, to go to town. With the garden I started to go to the city to sell our products in the market, over the objections of my husband and my oldest son,” Da Silva told IPS.

“Bringing money home when my husband was sick” helped overcome the resistance, she said. “Now my son, who is married, has a different attitude towards his wife.”

The 60-year-old mother of three grown-up children shares with five other local women one hectare of the village’s collective land, where they grow lettuce, coriander, onions, tomatoes, manioc, papayas, coconuts and other fruits and vegetables.

The difficulty is transporting products to the city of Caraúbas, 22 km away. The women hire a truck for 25 dollars, and they also have to pay for the maintenance and cleaning up of the stand where they sell their produce.

“We get up at two in the morning every Saturday to get to the market,” said Antonia Damiana da Silva, a 41-year-old mother of four.

But “our life has changed for the better, we eat what we produce, without poisonous chemicals, and we are different people, more free, we decide what we’re going to do and tell our husbands,” she said.

The village was created by families of farmers who lived in the surrounding areas, without land of their own, who occupied an unproductive piece of land. Their first attempt to occupy it lasted 18 days in 1997, when the owners of the land obtained a court order to evict them. 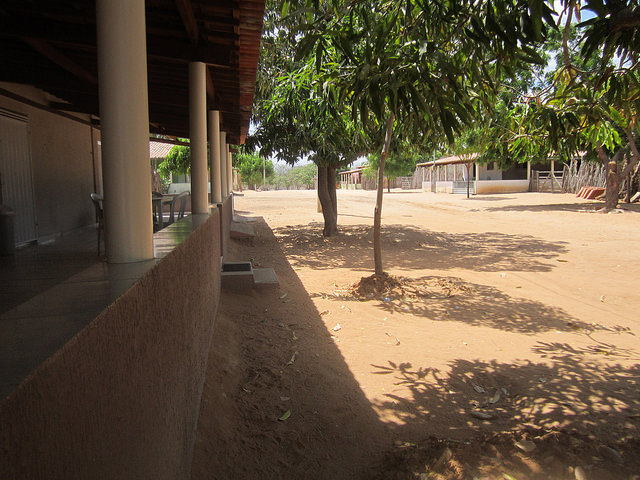 Part of the “agrovillage” where 65 families of the Primeiro do Maio village live, an oasis of green vegetation in the midst of aridity caused by five years with almost no rain in the caatinga, the semi-arid ecosystem exclusive to the Northeast of Brazil. Credit: Mario Osava/IPS

Two years later, they tried again, and the National Institute of Colonization and Land Reform assigned each family 13 hectares and a good house in the “agro village”. They were also awarded a common area for the community association building, for raising livestock, and for growing fruits and vegetables.

“Agro villages” in Brazil are rural settlements created in isolated areas, where houses and community and service facilities are concentrated near the plots of land. They form part of the government’s land reform programme, and offer previously landless farmers urban advantages such as schools, health posts and in some cases sewerage.

The drought which has dragged on for five years in the semi-arid Northeast is all too evident in the grey vegetation, apparently dead, throughout the entire ecosystem exclusive to Brazil known as the caatinga. But its low and twisted bush-like trees tend to turn green a few hours after it rains, even if it barely sprinkled.

The Primeiro do Maio agro village appears in the landscape almost like an oasis, because of the green of its trees and of the vegetable garden and orchard, populated by birds and other animals.

The traditional crops grown by the families, mostly corn and beans, were lost to the drought. But the community garden is still productive, irrigated with well water and managed according to the principles of agro-ecology, such as crop diversity and better use of natural resources, including straw.

They receive technical assistance and support from Diaconía, a non-profit social organisation composed of 11 evangelical churches, which are very active in the Northeast. 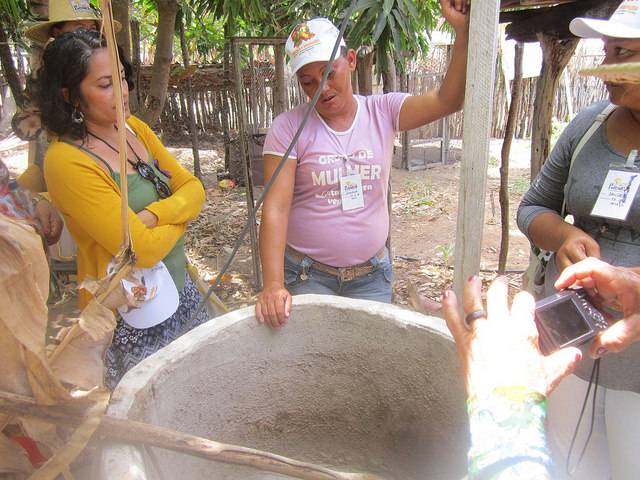 Antonia Damiana da Silva (C) proudly explains how her biodigester uses the manure from her small livestock to produce cooking gas for her family in the rural settlement where she lives in the state of Rio Grande do Norte in the Northeast of Brazil. Credit: Mario Osava/IPS

The income from the garden empowers the women, particularly in times of drought when the local crops are failing.

But because of the difficulties in getting the produce to market, and the prevailing but rarely mentioned sexism, the Group shrank from 23 to six members, who work in the garden and sell their produce in Caraúbas.

The garden, irrigated without any water wastage, is based on a production model promoted by Networking in Brazil’s Semi-Arid Region (ASA), which groups together some 3,000 social organisations in the Northeast, including trade unions, religious groups and non-governmental organisations.

“Coexisting with the semi-arid” is its slogan, in contrast to the former official policy of ”fighting drought” which generated one failure after another, with the construction of big dams, aqueducts and canals that do not provide solutions to the most vulnerable: poor peasant farmers scattered throughout rural areas.

The Primeiro do Maio village was one of eight places visited by participants in the National Meeting of ASA, which drew about 500 people Nov. 21-25 to Mossoró, a city in the state of Rio Grande do Norte, 80 km from Caraúbas.

“There can be no coexistence with the semi-arid, without feminisim,” according to ASA, which supports the Group of Women and other initiatives that bolster gender equality in rural communities. 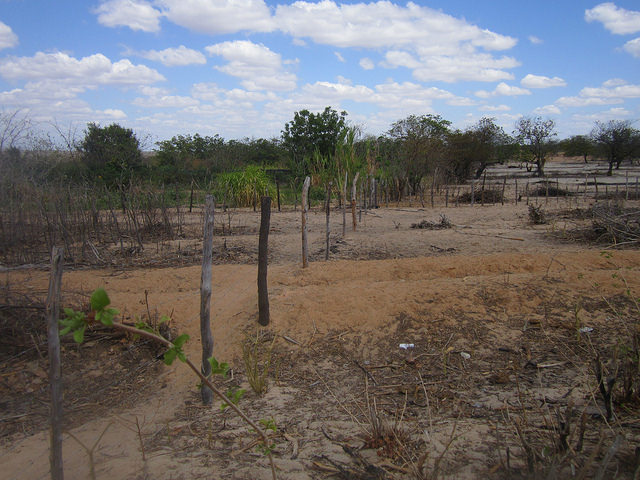 The green of the garden cultivated by women in the Primeiro do Maio village contrasts with the aridity of the surrounding area in the state of Rio Grande do Norte, in the Northeast of Brazil. Credit: Mario Osava/IPS

The “social technologies” that drive that coexistence are in general more rapidly embraced and with more determination by women.

Damiana, for example, has an arsenal of resources in the backyard of her house that enable her to assert that she enjoys “a wonderful life”.

A biodigester, fed with the manure from her small livestock, provides her with cooking gas. In the village there are 10 other houses that use this technology, which consists of a sealed container where organic waste ferments until producing methane gas and natural fertilisers.

“Biowater”, a chain of filters which cleans the wastewater produced in her home, makes it possible to reuse it in her vegetable garden and orchard. She also raises fish in a small three-metre-diameter tank. The fish she raises is the tilapia azul (Oreochromis niloticus), native to the Nile River, which is highly productive in fish farming.

Vanusa Vieira, a 47-year-old mother of two, is another participant in the Group who works in the collective garden, although she says she prefers working with animals. “I love raising animals, I can’t live without them, I look after them from early morning to night,” she told IPS standing in her yard where she has birds, goats and a cow.

“I learned from my father and mother, who had cattle and chicken,” she said. Now that she has her own house with a big yard she has an aviary and pens.

But the drought has forced her to reduce the number of animals she keeps. Corn got too expensive and water is scarce, she said. And her honey production, which “helped us buy a truck,” has stalled because the woods are dry and there are no flowers, Vieira explained.

But small livestock such as goats and sheep that are able to survive on limited food and water are a resource that helps families survive lengthy droughts like the one that has had the Northeast in its grip since 2012.

Also important is the small subsidy that the families of the agrovillage receive from the social programme Bolsa Familia, aimed at the poorest in this country of 202 million people. In addition, some of the men work as day labourers to boost the family income, in light of the fall in production on their plots of land.