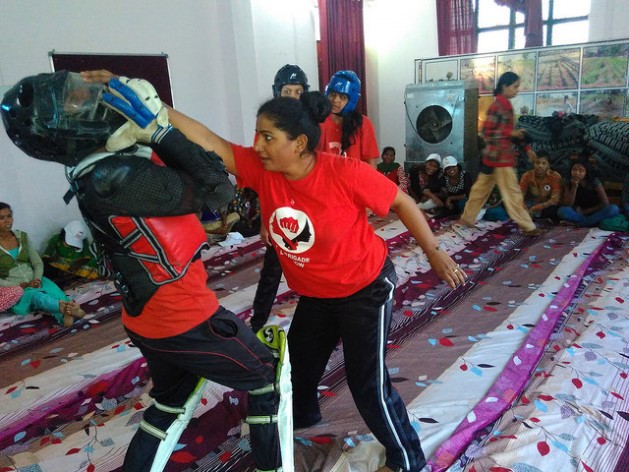 NEW DELHI, Dec 7 2016 (IPS) - Last month, Delhi Police launched a unique initiative to check spiralling crimes against women in the city, also known dubiously as the “rape capital” of India. It formed a squad of plainclothes officers called “police mitras” (friends of the police) — comprising farmers, homemakers and former Army men — to assist them in the prevention and detection of crime and maintenance of law and order.

In another scheme, police chiefs launched their own version of “Charlie’s Angels” — a specially trained squad of crime-fighting, butt-kicking constables in white kimonos who take on sexual predators across the country. The 40-member women’s squad trained in martial arts guards “vulnerable” landmarks in the city such as schools and metro stations, while undercover as regular citizens.

"I carry pepper spray and a knife with me as I return late from the office." -- Shashibala Mehra, 52, an accountant in New Delhi

India, considered one of the world’s most unsafe countries for women, has lately seen a raft of innovative initiatives to safeguard women from sexual crimes. Ironically, despite increasingly stringent laws and a visible beefing up of police protection, crimes against women have surged.

According to a report by the Comptroller and Auditor General of India, such crimes (primarily rapes, molestations and stalking) have skyrocketed by a whopping 60 percent between 2010 and 2011 and 2014 and 2015.

A report by the National Crime Records Bureau found 337,922 reports of violence, including rape, cruelty and abduction, against women in 2014, up 9 percent from 2013. The number of reported rapes in the country also rose by 9 percent to 33,707 in 2014, the last year for which such figures were available.

In addition, sexual harassment on Indian streets or in other public spaces is a common experience for women. A survey by the NGO ActionAid found 79 percent of Indian women have been subjected to harassment or violence in public.

The rise in attacks on women has also led to a mushrooming of volunteer-led projects which provide a valuable social service. For instance, one such initiative — Blank Noise — in one of its campaigns #WalkAlone, asked women across the country to break their silence and walk alone to fight the fear of being harassed on the streets. In another campaign, women were urged to send in the clothing they were wearing when they were harassed which were then used to create public installations.

By engaging not only perpetrators and victims, but also spectators and passers-by, Blank Noise, launched in 2003, relies on ‘Action Heroes’ or a network of volunteers, from across age groups, gender and sexuality to put forth its message. Effective legal mechanisms, staging theatrical public protests and publicizing offences help the organization mobilize citizens against sexual harassment in public spaces. Week-long courses are also offered to teach women how to be active in building safe spaces. 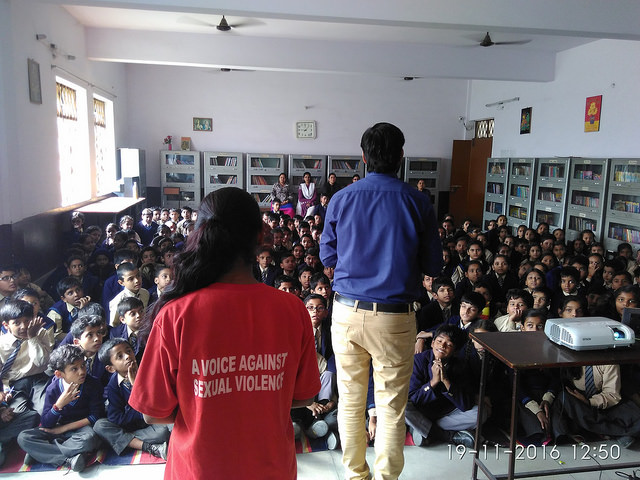 Schoolboys are sensitized about sexual crimes at a seminar in New Delhi. Credit: Neeta Lal/IPS

Although the Indian Parliament passed a strong anti-rape law while also making human trafficking, acid attacks and stalking stringently punishable, it hasn’t translated into diminishing crimes against women. Some women’s rights activists believe that women are inviting a counter-attack by claiming their right in public spaces.

“There’s a lot of media coverage, candlelight marches and social media angst if women are outraged but in reality little has changed, ” says Pratibha Malik, an activist with a pan-India non-profit Aashrita. “I feel the very presence of women in non-traditional spaces like offices, in bars, restaurants etc in a patriarchal society like India’s is responsible for this backlash.”

The trigger for much of legislative and police action was the December 2012 rape of a 23-year-old Indian medical student in a moving bus when she was returning from a movie with a male friend. The couple were attacked by a group of men, including one aged 14. The woman was raped several times and later died, while her friend was beaten with an iron rod. The incident sparked mass protests demanding action.

Following the episode, which created global headlines, a committee — Justice Verma Committee — was instituted and its report cited “the failure of governance to provide a safe and dignified environment for the women of India, who are constantly exposed to sexual violence.”

The three attackers in the 2012 rape were sentenced to death and within months the government passed a bill broadening the definition of sexual offences to include forced penetration by any object, stalking, acid violence and disrobing.

However, such actions by the State haven’t really resulted in much succour for the fairer sex.
They feel they have to take charge of their own security. Many women IPS spoke to, say they feel danger still lurks around street corners, especially in the big cities, where venturing out at night is still considered an `adventure’.

“I don’t feel safe in public places at all nor while using public transport. I know nobody will come forward to help me if I get into trouble,” says Rekha Kumari, 30, a cook.

“I carry pepper spray and a knife with me as I return late from the office,” says Shashibala Mehra, 52, an accountant in New Delhi. “Throughout my 40-minute commute back home I keep talking to my husband on phone just so that he knows when I’m in trouble.”

Laxmi Aggarwal, 27, an acid attack victim who has now become an activist championing the ban on the sale of acid in India, says the government has done little to prevent its sale. “Young, vulnerable girls are attacked in many parts of rural India,” she says.

Aggarwal has joined hands with an organization called Stop Acid Attacks to assist other victims of such attacks and also fight for their rights in local courts.

Realizing how some Indian law enforcement agencies can no longer be trusted for their safety, many women are also resorting to buying weapons and pepper spray, downloading security apps, signing up for self-defence classes, and joining self-help groups.

Such initiatives, say activists, are vital to safeguard Indian women who are stepping out of their homes to work, travel and lead a full life.

“We try to make erring men see reason after talking to the man and his parents. If he still doesn’t listen, we go to the police station,” says Usha Vishwakarma. “If he’s still adamant, we go into the action stage.”

An important part of the support Red Brigade offers involves helping victims get rid of the self-guilt that the violence they suffered was their fault.