This is an op-ed article by Alicia Bárcena, executive secretary of the Economic Commission for Latin America and the Caribbean (ECLAC). It is part of the special IPS coverage on the occasion of International Women’s Day, celebrated March 8. 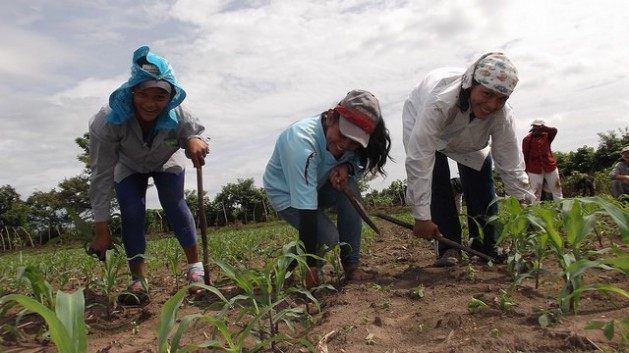 Rural workers in the Bajo Lempa region of El Salvador. In Latin America and the Caribbean, 78.1 per cent of employed women work in low productivity sectors, which implies lower pay, less contact with technology and innovation, and in many cases poor quality jobs. Credit: Edgardo Ayala/IPS.

SANTIAGO, Mar 3 2017 (IPS) - Latin America and the Caribbean is the only region in the world where, for the past four decades, states have continuously met to discuss and commit themselves politically to eradicating discrimination and gender inequality and moving towards guaranteeing women the full exercise of their autonomy and human rights.

Since the first Regional Conference on Women in Latin America and the Caribbean, held in Havana in 1977, the region has been through years of political, economic, social and cultural changes, which have meant progress for women in the region but which also have shown the persistence of inequality.

We have overcome a number of obstacles, collectively giving rise to exceptional developments. But there is still a wide wage gap in the region, as well as pending issues in terms of sexual and reproductive rights and the challenge of achieving greater political participation for women.

The sustainable development goal involving gender equality, born from the synergy between the Regional Gender Agenda and the 2030 Agenda, leads us to focus our attention and action on the structural basis of inequality in our societies.

In the first place, we look at socio-economic inequality and poverty and the necessary transformation of the prevailing development model towards one that incorporates new patterns of sustainable production and consumption, and of redistribution of wealth, income and time.

In its latest studies, ECLAC has shown that a rise in the proportion of women in the labour market would contribute to the reduction of poverty in the region, with paradigmatic cases such as El Salvador, where poverty could be reduced by up to 12 percentage points if more women earned an income. 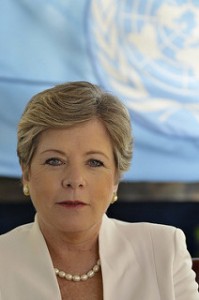 To understand the barriers that women face it is crucial to analyse two key aspects of economic autonomy. On the one hand, access to their own monetary resources, and on the other hand, the dimension of time use.

In the region, the proportion of women without an income of their own amounts to about 30 per cent; that is to say, one in three women in Latin America and the Caribbean still lack their own source of income. This is without a doubt a great challenge for the autonomy of women who depend on other members of the household to satisfy their needs and those of their families.

Moreover, 26 per cent of women over 15 earn less than the minimum wage. As a result, more than half of the women in the region either have no income of their own or earn so little that real economic autonomy is impossible.

Proposals such as a universal basic income or the enforcement of a minimum wage in certain female-dominated sectors which today have no legal protection are tools that would boost women’s access to their own income.

With respect to time use, it has been demonstrated that women across the region invariably have a larger total workload than men. The traditional sexual division of labour, very marked in the region, assigns non-remunerated work mainly to women, and makes it virtually their exclusive responsibility.

This is one of the main obstacles for women to join the labour market and have access to personal and professional development. The reduction of the workday and policies to promote shared responsibility in care-giving are tools that could modify and help balance the current inequality in the workload between women and men.

Along with indicators on time use, putting a monetary value on housework and unpaid caregiving in the household and including it in the national accounts has been a powerful tool for making women’s contribution to national economies visible.

Figures reveal that if unpaid housework and caregiving was given a market value, approximately one-fifth of the wealth quantified in the national accounts would be produced in the households, mainly by women.

This information clearly points to the need to design public policies aimed at achieving equality, which recognise women’s contribution to the economy through unpaid work and promote shared responsibility and a more equitable distribution of the workload.

What are needed are public policies to avoid reproducing gender stereotypes, taking into account the different roles that women play, and strengthening their insertion in the labour market and their professional development at the highest level, to capitalise on their training and skills in sectors of higher productivity. This would undermine the foundations of the horizontal and vertical segmentation that characterises the labour market for women today.

In October 2016, the governments gathered at the XIII Regional Conference on Women agreed to implement the Montevideo Strategy and put into effect the premises established in previous agreements, and to comply with the Sustainable Development Goals included in the 2030 Agenda.

This synergy raises the challenge of implementing gender equality as a key cross-cutting component of every public policy, in pursuit of fulfilling the 2030 Agenda.

The time has come for a shift in the gender paradigm in our countries, to put an end to patriarchal society. It is time to pave the way for equality in all its forms and in all possible scenarios, to respect and view women beyond our gender, for all our capabilities and for our continuous struggle for the construction of a more just and equitable society, not just for all women, but for everyone.