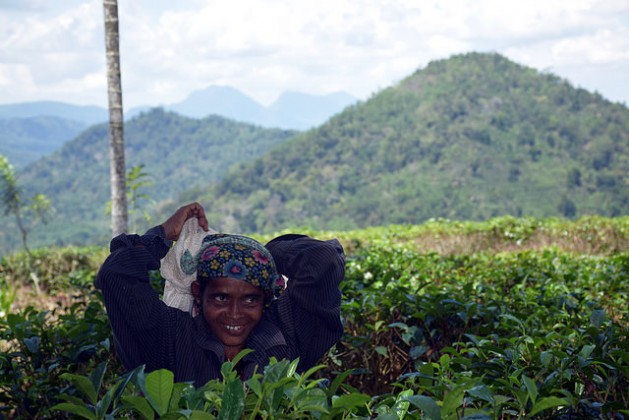 Small tea farmer Kamakandalagi Leelavathi harvests leaves in the Uda Haupe tea estate in Kahawatte, Sri Lanka. She is one of hundreds of farmers who are shunning herbicides and other chemicals. Credit: Stella Paul/IPS

RATNAPURA, Sri Lanka, Mar 28 2017 (IPS) - As the mercury rises higher, Kamakandalagi Leelavathi delves deeper into the lush green mass of the tea bushes. The past few afternoons there have been thunderstorms. So the 55-year-old tea picker in Uda Houpe tea garden of Sri Lanka’s Hatton region is rushing to complete her day’s task before the rain comes: harvesting 22 kgs of tea leaves.

“The rain is very unpredictible. Now there are downpours but it has been very dry the past few months,” says the daily wager who owns a one-acre marginal farm.

Yet at the Uda Houpe tea garden, the situation is much better, says Daurkarlagi Taranga, Leelavathi’s daughter and fellow tea farmer. “We have not been affected as badly as others. Here, the bushes are still full (of leaves) and the ground is moist thanks to the techniques we use,” she says.

These techniques are assorted green actions taken by small tea planters to manage their farmland in an eco-friendly way, explains Alluth Wattage Saman, manager of the Uda Houpe estate. The most important of these actions is minimising use of synthetic weed killer (herbicide), widely viewed as the main reason behind the degrading health of soil and tea plants in the region. 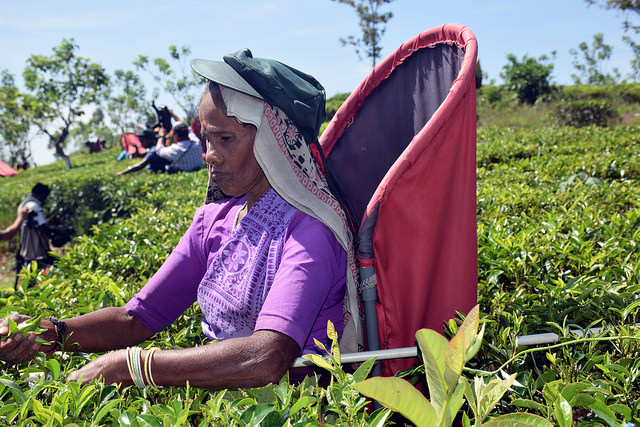 A tea picker in the Bearwell tea estate of Sri Lanka, which has adopted sustainable land management along its supply chain. Credit: Stella Paul/IPS

Climate threat to a lucrative sector

The tea sector of Sri Lanka is 153 years old and remain the largest industry today, providing employment to 2.5 million people. According to the Sri Lanka Export Development Board, the industry counts for 62 percent of all agricultural exports and brings home 1.6 billion dollars in foreign currency each year. Contributing to this huge business is a 400,000-strong small tea farmer community.

However, the lucrative tea economy of the island nation has been witnessing growing environmental challenges – the biggest of them being severe land degradation.

According to the United Nations Convention to Combat Desertification (UNCCD), there is high rate of land degradation across the tea growing region in Sri Lanka. The biggest reason is that farmers here have used synthetic weed killer on the plantations for several decades.

They also paid little attention to protecting the water sources and biodiversity around the plantations. This has gradually affected the health of the soil, decreasing its fertility level, making it more acidic and also causing soil erosion.

While the degradation has affected the entire industry, the livelihoods and food security of the small tea growers are particularly threatened, says Lalith Kumar, project manager at the Tea Small Holding Development Authority (TSHDA) in Ratnapura, a region that produces over 70 percent of Sri Lanka’s tea. 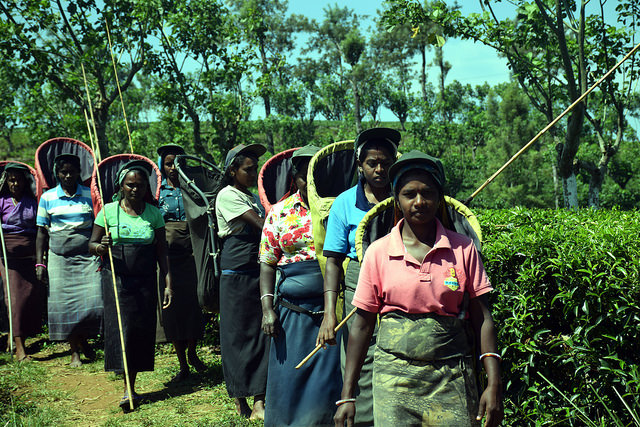 The TSHDA is a government agency working with small tea growers in the country. According to Kumar, there are 150 small tea farms (less than 10 acres of land) in the Ratnapura region alone which provide livelihood to about 100,000 farmers. Climate change has worsened the situation with recurring droughts, erratic rainfall, and increasing soil erosion and acidification.

As a result, tea bushes are withering and moisture from the topsoil is evaporating, leaving the soil hardened and plant roots weak and damaged.

To help the tea farmers deal with this, TSHDA is currently working with the United Nations Environment Program (UNEP) on a project to minimise herbicide use in the small tea farms and reverse the processes of degradation by sustainably managing the land.

According to a document by Global Environment Facility (GEF), the funder of the 2.9 million project, the goal is to “improve farm management practices, so that existing production land becomes more productive and forests, rivers, streams and other biologically important land situated on or adjacent to tea production areas are protected from negative impacts.”

A major step taken by the TSHDA is to train the farmers to manage their land in a sustainable way with minimum or no herbicides.

“We have started to train small farm managers in sustainable land management techniques that are simple, yet effective,” Kumar said. A lot of weeds grow around the tea bush, but only some of them are harmful.

“We train them in identifying the weeds and removing the harmful ones either by uprooting or cutting them at the roots. The weeds are then used as a bed of mulch, applied in between the two rows of tea plants. This helps retain the moisture on the land,“ he explained.

Saman, the manager of the Uda Haupe, is one of the 300 small tea growers who have been trained by TSHDA so far. It was an informal, hands-on training, reveals Saman, which included a day-long visit to a progressive and sustainably managed farm – the Hapugastenne tea estate.

There Saman saw small farmers like him managing their land without any synthetic weed killer or pesticides. He also learned to use organic manure, protect the water sources like natural springs within the plantation, as well the shedy trees, so birds and other animals can also survive. Finally, he learnt that the yield of the farm had increased almost by 60 percent since they adopted those techniques.

The visit, says the tea planter, helped him realize “small steps can bring bring big changes in a farm”.

The result has been encouraging: “I earlier spent 35,000 on herbicide every year, now I am saving that amount. My overall profit has gone up to 75,000 rupees,” says Saman, who has shared the newfound knowledge with his workers.

Saman and other small tea farmers in the area like Leelavathi sell their harvest to Kahawatte Plantation, a tea estate owned by corporate tea giant Dilmah. Early this month, the plantation received a Rainforest Alliance certificcation which recognizes that the estate maintains sustainability standards all along its supply chain, including the farms from where it buys the tea. This has already boosted the price of the estate’s produce, but suppliers like Saman are not aware of either the certification or its economic benefits such as higher market value.

“Nobody has told us about this,” Saman says.

Others want the government to help them with monetary incentives to better deal with climatic challenges.

At present, TSHDA offers a 50 percent subsidy to farmers who want to do a replantation on their farm – a complex and costly process that involves complete uprooting of all the tea plants, re-preparing the soil and replanting the saplings.

This is done when the yield in the farm drops dramatically due to either age (normally 30 years) or severe degradation of the land that cripples productivity. However, there are no other subsidies or incentives provided to the farmers right now for adopting sustainable land management – a policy that small tea growers like Leelavathi would like to see change.

“Since the use of the mulch, I began to save 700 rupees every month on herbicide and my total income rose to 15,000. But because of the growing droughts, I have to use most of it on fertilizer. If the government gives a subsidy, it will be very helpful. Or else I may have to migrate to another estate to earn more,” she says.