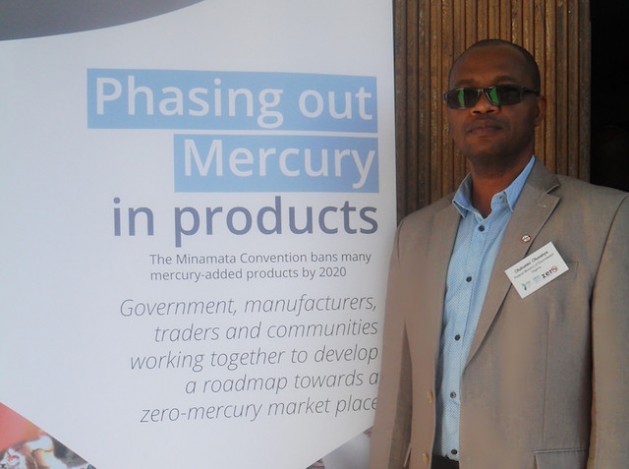 Olubunmi Olusanya of the Federal Ministry of Environment, Nigeria is keen on phasing out mercury-added products. Credit: Miriam Gathigah/IPS

NAIROBI, May 30 2017 (IPS) - With a new international treaty, an increasing number of African countries are committing to phasing out mercury, a significant health and environmental hazard.

Research has shown that maternal exposure to mercury from contaminated fish can cause learning disabilities in developing babies. When inhaled, mercury vapor can also affect the central nervous system, impair mental capacity and, depending on levels of exposure, even lead to death.

"The ripple effect of using mercury is very costly in both human health and harm to the environment.” --Olubunmi Olusanya

“Despite the danger that mercury poses, it is still widely used, especially in Africa, and this is of great concern,” says Olubunmi Olusanya of the Federal Ministry of Environment, Nigeria.

He told IPS that “While Africa does not manufacture mercury added products, the continent is a leading importer of mercury. The ripple effect of using mercury is very costly in both human health and harm to the environment.”

It is within this context that the Zero Mercury Working Group recently held a series of meetings in Nairobi, Kenya to address phasing out of mercury.

The Zero Mercury Working Group is an international coalition of over 95 public interest environmental and health non-governmental organizations from more than 50 countries around the world, with several NGO members coming from African countries.

“Phasing out mercury will mean replacing mercury added products such as thermometers, thermostats and batteries with alternatives, but it also means reducing and ultimately eliminating the use of mercury in artisanal and small-scale gold mining,” explains Elena Lymberidi-Settimo, International Co-coordinator of the Zero Mercury Working Group.

According to the Zero Mercury Working Group, artisanal and small scale gold mining (ASGM)  is a complex global development issue. It uses and releases substantial amounts of mercury in mineral processing, usually in highly unsafe and environmentally hazardous conditions.

Haji Rehani, a Senior Programme Officer at the Agenda for Environment and Response Development in Tanzania, who works closely with artisanal and small scale gold mining communities, says, “This kind of mining is the largest demand sector for mercury globally.”

He says that mercury is used to bind the gold to form an amalgam, which helps separate it from the rock, sand and other materials. The amalgam is then heated to vaporize the mercury, exposing miners and contaminating the environment while leaving the gold behind.

“There is a need to engage as many stakeholders as possible from the miners all the way to governments,” he advises.

He told IPS that African governments have shown the greatest worldwide commitment to addressing mercury as a health hazard and to ultimately phase it out.

Rehani says that this commitment has been demonstrated through Africa’s active involvement in the adoption of the Minamata Convention on mercury in October 2013, when 128 countries signed on.

“This legally binding agreement was developed and adopted to protect human life and environment from mercury emissions. It has clear time-bound targets for phasing out the manufacture, export or import of a number of mercury added products specified in the Convention,” he expounds.

At the moment, 52 countries have ratified the Convention, marking a significant milestone since the Convention requires at least 50 countries to ratify in order for the treaty to enter into force.

The Convention will therefore come into effect in the next 90 days. This further reinforces the significance of the zero mercury conference, which provided a platform for cross-country knowledge sharing towards reducing and eventually eliminating the use of mercury in all sectors.

Desiree Narvaez of the UN Environment Chemicals and Health Branch explained the need for stakeholders to have a platform to address mercury as a global health and environment issue, noting that such platforms are essential for governments to understand the devastating impact of mercury use.

Of the 52 countries, Africa is ahead of every other continent with 19 countries ratifying the Convention. The Zero Mercury Working Group has major ongoing intervention projects in, for instance, Nigeria and Mauritius, focusing on phasing out mercury added products by 2020 as stipulated in the Minamata Convention.

Other Zero Mercury projects are also in countries such as Ghana and Tanzania where the main focus has been reducing and eventually eliminating the use of mercury in artisanal and small scale gold mining.

These projects are also keen on protecting vulnerable populations, and specifically women and children.

Experts at the conference reiterated the fact that the use of mercury in artisanal and small scale gold mining continues to rise, especially in developing countries, mainly because it is considered simple and inexpensive – producing 20 to 30 percent of the world’s gold.

The Zero Mercury Working Group estimates that 15 million people in approximately 70 countries are employed in artisanal and small scale gold mining, with many exposed to mercury. Four to five million of them are vulnerable women and children.

As a result, there is a need for concerted efforts to protect such disadvantaged populations and for countries to ensure that their respective National Action Plans emphasize the protection of such vulnerable groups when implementing the Convention.

There was significant emphasis during the Nairobi conference on the need for governments to develop and implement the Convention, which contains mandatory obligations to eliminate where feasible, and otherwise minimize, the global supply and trade of mercury.

A key stakeholder during the conference and indeed in global efforts to phase out mercury is the United Nations Environment Global Mercury Partnership (UN Environment).

Within the context of the Minamata Convention the focus of the UN Environment Global Mercury Partnership has shifted to support crucial areas of the treaty.

This includes banning  a number of listed mercury added products by 2020, with the exception of a Party registering an exemption.

Reducing and ultimately eliminating the use of mercury in small scale gold mining is expected to be done progressively, with the objective achieved in about 15 years.

The meeting brought together many government officials and stakeholders in a one-day forum held on the heels of the Zero Mercury conference to develop their own road maps for phasing out mercury under the Minamata Convention by 2020.

This included 35 delegates from 31 countries, representatives of seven United Nations and intergovernmental agencies, 15 NGOs and five other delegates from academics, private sector and consultants.

It emerged from the meetings and experience sharing that there is a great need for country-specific laws to explicitly outlaw the use of mercury in products and taking voluntary steps to significantly reduce mercury in artisanal and small scale gold mining, since the treaty doesn’t specifically ban it.

For example, Uganda has signed the Minamata Convention and is in the process of developing a National Action Plan for reducing mercury in artisanal and small scale gold mining. While this will take this East African nation a step closer towards phasing out mercury, there is no legislation in place outlawing the use of mercury.

“In this regard, stakeholders must embrace as many partnerships as possible. Mercury is a cross-cutting issue and one single entity cannot address this agenda. We need the government, Civil Society Organizations, miners and others as was demonstrated during the Zero Mercury conference,” said Anne Lillian Nakafeero from the National Environment Management Authority in Uganda.