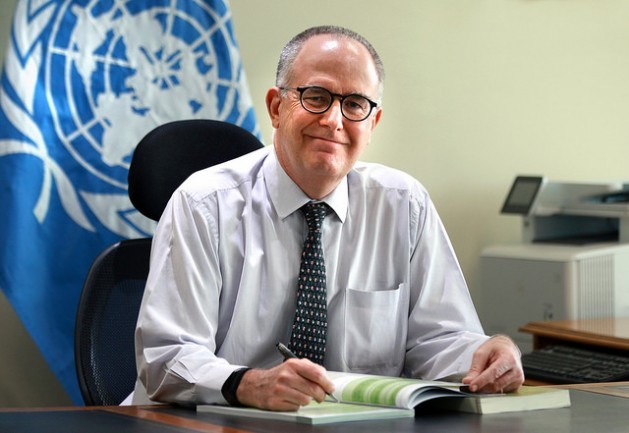 Julio Berdegué, FAO regional representative for Latin America and the Caribbean, in his office in Santiago. Credit: Maximiliano Valencia/FAO

SANTIAGO, May 24 2017 (IPS) - The fight against hunger has been “remarkably successful” in Latin America and the Caribbean, but “it is a crime” that 35 million people still go to bed hungry every day, FAO regional representative Julio Berdegué told IPS.

Berdegué, who is also assistant director-general of FAO (United Nations Food and Agriculture Organisation), with decades of experience in matters related to rural development, said during his first interview as the new regional representative that the biggest challenge in Latin America and the Caribbean is inequality, which “is present in every action and contributes to many other problems.”

In the FAO regional office in Santiago, Berdegué, from Mexico, discussed with IPS issues such as obesity, “in which we are losing the fight,” the weakness of rural institutions, which facilitates corruption, or the weakness of the social fabric, which drug trafficking mafias depend on, as well as the need to address the question of water scarcity which is here to stay due to climate change, and where the key is the transformation of agriculture, which uses 70 per cent of all water consumed.

IPS: What do you consider are the greatest debts of the region in the agri-food sector?

JULIO BERDEGUÉ: We unfortunately still have very high levels of rural poverty. Nearly 50 per cent of the rural population is still living in poverty conditions and almost 30 per cent in extreme poverty. There are 58 million rural poor and 35 million living in conditions of indigence, who are not even able to feed themselves adequately.

IPS: This is happening in the region that has been the most successful in reducing poverty and hunger in this century…

JB: We have a problem with malnutrition and hunger, which even though they have been notably reduced, still stand at 5.5 per cent, which in human terms means that 35 million Latin Americans are still going to bed hungry every day, and six million children are chronically undernourished… Which is a crime. And of these, 700,000 children suffer from acute and chronic undernutrition… that is terrible.

IPS: In that context, which will be the priorities of your administration?

JB: The main thrust has been continuity, and I want to adhere to that. FAO’s mission and strategic objectives are clearly defined in a medium-term work plan discussed and approved in May in Rome (at FAO’s global headquarters).

The first objective has to do with hunger…undernourishment and malnutrition will continue to have a central role in the agenda. The second has to do with greater sustainability of agriculture, contributing to global food security, in a sustainable manner.

The issues of rural poverty, where unfortunately family agriculture is included, beyond what people might think, are not yet lost, but we still have a long way to go. Also the importance of food systems, which have experienced in the past 25 to 30 years a radical shift in their depth and speed, and the importance of resilience in the face of climate change.

IPS: And what are the regional assets available to carry out these tasks?

JB: We must not lose sight of the fact that Latin America is a great contributor to global food security. What our region does in this matter is very important, and we must take advantage of this strength.

This is also a region with enormous biodiversity. In terms of biodiversity the region is a player of global importance and whatever we do well or badly affects each person on this planet.

IPS: Has there been progress in the political and social spheres?

JB: The question of peace in the region is another asset. What has happened in Colombia (with the peace agreements that came into force in late 2016) is exciting for all of us, and is of utmost importance. In the last 20 years there has also been heavy spending in rural areas, on roads, electrification, telecommunications, and access to basic services, education and health. The educational levels of our rural people under 35 are far higher than that of their parents. These are assets that we need to mobilise.

IPS: And what are the weaknesses you perceive in these same fields?
JB: In rural areas, government institutions are very weak, in most countries in the region… The exceptions can be counted on the fingers of one hand… and they are weak because they are outdated, because there is much corruption, patronage, use of public budgets for particular interests, and that weakens the government and public action for the benefit of society as a whole. It makes our job difficult.

IPS: Apart from that difficulty, what other challenges does the region face?

JB: The rural social fabric has been weakening in some countries. The penetration of drug trafficking, of violence, which often goes hand in hand with corruption, makes life very hard for the inhabitants of those rural areas and makes it very difficult to bring political solutions that would increase their opportunities and well-being. The situation in some Central American countries is extremely concerning. In my own country, Mexico, the situation worries all Mexicans. The levels of violence in Venezuela… There are countries where the weakening of the social fabric is a warning sign.

IPS: Latin Americans are facing a new and growing problem, obesity, without yet having solved that of chronic malnutrition…

JB: Malnutrition is a crime. The fact that more than half of the rural children in Guatemala suffer from chronic undernutrition is unacceptable in the 21st century, but obesity is killing us. Not long ago, Mexico’s minister of health, Dr. José Navarro, who until recently was the provost of the National Autonomous University of Mexico (UNAM), reminded us that obesity kills more people than organised crime in Mexico. Obesity is definitely killing us.

IPS: Do malnutrition and obesity have anything in common?

JB: First, let me say in what they differ. We have greatly reduced undernutrition. In this, Latin America has been remarkably successful, even at a global level. We are the only region that has met its Millennium Development Goals. But in terms of obesity we are losing the fight badly. Every day there are more overweight and obese people.

What they have in common, from FAO’s perspective, is a radical change in Latin America’s food systems. The world in which we had local markets and people ate locally produced food, where many people went home to eat, has disappeared forever.

Today our food systems are globalised, the bulk of the distribution of food products is through supermarket chains, most of what we eat are ultra-processed foods. Even our farmers eat mostly purchased food: processed and ultra-processed.

IPS: But this is a global phenomenon, as you say, not only regional…

JB: The point is not the transformation of the agri-food systems. That transformation can also be observed in Norway, Canada or New Zealand. They have the same patterns of urbanisation, of eating outside the home, purchasing in supermarkets, ultra-processed foods, etc. The difference is that in those places there are public policies. Ours is a transformation that responded to market forces without public policies. The market achieves important things… today food products are much cheaper, but with enormous consequences, one being obesity and the erosion of public health in all aspects that have to do with what and how we eat.

IPS: So, what public policies are needed in the region to tackle obesity?

JB: What has to be done is to ‘redirect’ these transformation processes of the food systems, bearing in mind that we have public objectives. Redirecting means setting certain limits. For example, what is being done in Chile and to some extent in Mexico with sugary beverages, and labeling. There are healthy and unhealthy foods, and consumers have to know this.

Redirecting also means putting greater emphasis on public education with regard to healthy eating. It means that if there are places with less access to a more varied diet, to fresh fruit and vegetables, we cannot leave it to be solved by the market.

IPS: Another problem that is creating conflicts is water, its scarcity and its uses. What should be done from the agri-food sector?

JB: We have a terrible problem here, which is that agriculture is consuming 70 per cent of our planet’s fresh water. This is not sustainable and has no future. If I were president of a given country in 30 or 50 years, and they told me: ‘To produce potatoes you are using 70 per cent of the water and people have no water in the cities because of climate change,’ as president I would say: ‘well, we will import potatoes, and stop growing them.’

Between giving water to the people or producing potatoes, lettuce or asparagus… we are going to lose that fight. Our farmers fight, they organise to get more water, and it is good that they do that. We make dams and reservoirs, that’s great. But we have to start thinking how we can practice agriculture using less water, how we can produce the same amount of food without using 70 per cent of the water, and using half of that instead. We cannot talk about ‘zero water’ agriculture, but it should be much less than 70 per cent, and this is something that we are not thinking about.

We are used to using water almost without restrictions, and climate change is putting an end to that. We will not be able to go rapidly from 70 to 35 per cent water use in agriculture, but we better start now because otherwise climate change will win the race.