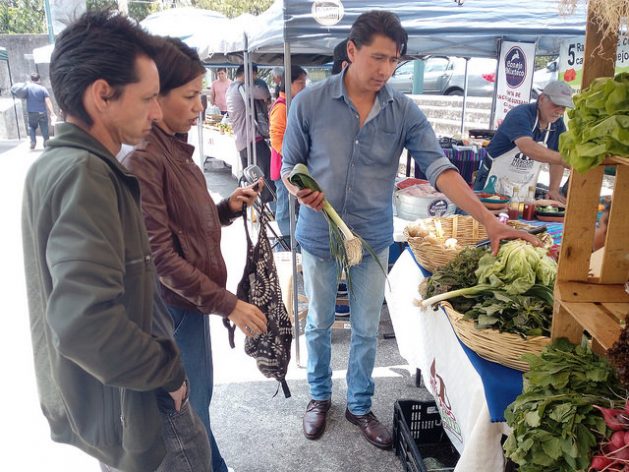 Mauricio Rodríguez, a member of the association of Organic Vegetables’ Producers of San Miguel Topilejo "Del Campo Ololique", serves customers at his stall in the Tlalpan Alternative Market, in the south of Mexico City. Credit: Emilio Godoy/IPS

MEXICO CITY, Jul 20 2017 (IPS) - Víctor Rodríguez arranges lettuce, broccoli, potatoes and herbs on a shelf with care, as he does every Sunday, preparing to serve the customers who are about to arrive at the Alternative Market of Bosque de Tlalpan, in the south of the Mexican capital.

Farmers bring their organic vegetables from San Miguel Topilejo, a rural village a few km away in the municipality of Tlalpan, where they grow chard, onions, radishes, beets and other produce as a group on a total of seven hectares.

Agriculture “is a family heritage handed down by our grandparents, we are the third generation, it gives us knowledge and tools for living. We farmers must continue to exist, because we form part of the food chain,“ said Rodríguez, 36, whose wife also works in the association.

He is one of eight members of the Organic Vegetables’ Producers association of San Miguel Topilejo “Del Campo Ololique”, which in the Nahuatl indigenous tongue means “place where things are well.“

Rodríguez, a father of two, says “the best thing to do was return to the roots and contribute to future generations,“ referring to the decision to engage in organic farming and create direct channels of distribution, instead of selling their crops to wholesalers, who used to pay them a pittance.

“We have made it through the hardest part, which was to keep the project alive. Now we have steady customers who want healthy products, they know what they are consuming. We have gained the trust of our customers,“ he explained.

The association emerged in 2003 and harvests some 700 kg of vegetables a week, which the members take on Sundays to the Tlalpan street market and two other alternative markets in Mexico City, and on Tuesdays to Cuernavaca, a city about 90 km south of the capital.

They also welcome visits to the farm by customers interested in seeing how they do things.

The group has added 1,000 metres of tomato greenhouses and 500 of cucumbers, thanks to a rainwater collection system that allows them to cultivate year round. They also make beet juice and ready-to-eat salads, to incorporate added value.

In Topilejo, which in Nahuatl means “he who holds the precious chieftain’s staff“ and where some 41,000 people live, the group also protects the forest and has built terraces to prevent mudslides.

The Ololique association is one of the five winners of the 2017 Fund for the Innovation of Short Agri-Food Chains, organised by the United Nations Food and Agriculture Organisation (FAO) and the non-governmental organisation Slow Food Mexico, which distributed some 34,000 dollars between five undertakings.

Short food supply chains are market mechanisms that imply a proximity between places of production and consumption, which offer products grown using sustainable agricultural practices, with fewer intermediaries and closer ties between producers and consumers.

The idea is that these mechanisms can bolster family farming, whose international year was celebrated in 2014, to promote agroecological practices, improve farmers’ incomes, protect the environment and bolster sustainable food.

“Short chains are mechanisms of commercialisation to sell directly to consumers or through only one intermediary,“ explained Mauricio García, coordinator of the Short Food Chains project in the FAO office in Mexico.

“Since the farmers know the consumers, they start growing in response to demand, and their products sell better. The consumer knows who the producers are and can see how they grow their food,“ he told IPS.

The expert said that this way “a connection“ is established that allows small-scale farmers to sell their products at a fair price and allows consumers to buy products knowing where they came from.

FAO and the Ministry of Agriculture, Livestock, Rural Development, Fisheries and Food estimate that small-scale agriculture produces 75 per cent of the country’s food. Of the more than five million farms in Mexico, over four million are family farms.

In this country of 129 million people, there are only 26 short food supply chain street markets, where farmers sell their produce directly to consumers in markets that they have set up themselves, according to the Platform of ‘Tianguis’ and Organic Markets of Mexico, and confirmed by FAO.

In 2017, the Mexican Agriculture Ministry’s Programme to Support Small-Scale Producers has a budget of 490 million dollars – a 29 per cent increase with respect to 2016.

One of the objectives of the Ministry’s 2013-2018 sectoral programme is to support the production and incomes of small-scale farmers in the poorest rural areas.

Rodríguez said that reaching more markets and consumers without intermediaries will require more support. “These projects are indispensable, because we defend agriculture, preserve our communities and protect the environment,“ he said.

The group plans to buy a solar dryer, add another four hectares of land in 2018, register their brand and design packaging and wrappers for their processed foods.

FAO and the Agriculture Ministry list some of the challenges for small-scale agriculture, such as human capital, limited capital goods and technologies, weak integration in production chains and degradation of natural resources.

They also include high vulnerability to weather shocks, low yields and serious constraints due to shortages of land and water.

García suggests a change in perspective for the public sector.

“We want strategic aspects to be financed in these projects, which already have a history and required very concrete things, in order for them to work better. They can have better products, with more added value to generate more resources and to be able to sustain their projects,“ he said.

He stressed that “these are replicable initiatives, we need to finance them, for them to thrive and to promote their replication.“

Since 2013, the more than 190 United Nations member states have been negotiating the “Declaration on the rights of peasants and other people living in rural areas.“

It addresses and promotes the rights to natural resources and to development, to participation, information about production, commercialisation and distribution, as well as to access to justice, work, and safety and health in the workplace.

In addition, it deals with rights to food and food sovereignty, to decent livelihoods and income, to land and other natural resources, to a safe, clean and healthy environment, to seeds and to biodiversity.

Meanwhile, organisations of farmers, rural associations and research centres have promoted, since 2015, that the UN declare a “Decade of Family Agriculture“.