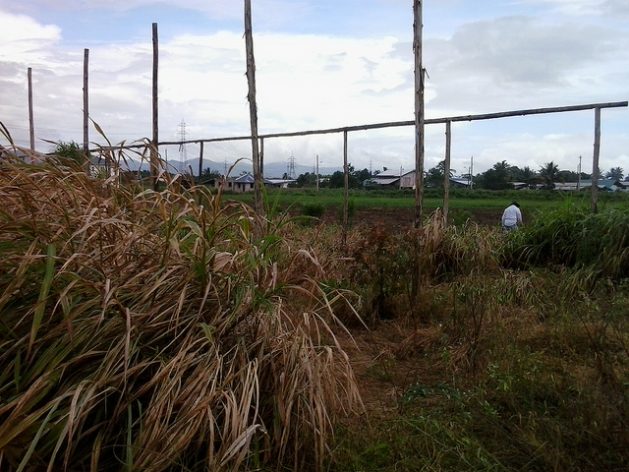 The remains of abandoned shade houses that one farmer attempted to build to protect his crops from the effects of climate change in Trinidad. Credit: Jewel Fraser/IPS

KINGSTON, Jamaica, Aug 7 2017 (IPS) - Since 2013, Jamaica’s Met Office has been using its Climate Predictability Tool (CPT) to forecast ‘below average’ rainfall or drought across the island. The tool has allowed this northern Caribbean island to accurately predict several dry periods and droughts, including its most destructive episode in 2014 when an estimated one billion dollars in agricultural losses were incurred due to crop failures and wild fires caused by the exceptionally dry conditions.

In neighbouring Cuba, the reputation of the Centre for Atmospheric Physics at the Institute for Meteorology (INSMET) is built on the development of tools that “provide reliable and timely climate and weather information” that enables the nation to prepare for extreme rainfall and drought conditions as well as for hurricanes.

“We saw the need to develop a drought tool that was not only easy to use, but free to the countries of the Caribbean so they would not have to spend large amounts of money for software." --INSMET’s Dr. Arnoldo Bezamilla Morlot

Regional scientists believe the extended dry periods are one of several signs of climate change, now being experienced across the region. Dr. Ulric Trotz, Deputy Director and Science Adviser at the Caribbean Community Climate Change Centre (CCCCC) – known regionally as the Five Cs – believes climate change is threatening the “Caribbean’s ways of life”.

Dr Trotz noted, “Some countries in the Caribbean like Barbados and Antigua are inherently water scarce. It is expected that climate change will exacerbate this already critical situation. We have seen in recent times the occurrence of extended droughts across the Caribbean, a phenomenon that is expected to occur more frequently in the future.

“Droughts have serious implications across all sectors – the water, health, agriculture, tourism -and already we are seeing the disastrous effects of extended droughts throughout the Caribbean especially in the agriculture sector, on economies, livelihoods and the wellbeing of the Caribbean population,” he said.

With major industries like fisheries, tourism and agriculture already impacted, the region continues to look for options. Both the Cuban and Jamaican experiences with forecasting tools means their use should be replicated across the Caribbean, Central and South America as scientists look for ways to battle increasingly high temperatures and low rainfall which have ravaged the agricultural sector and killed corals across the region.

Charged with the Caribbean Community (CARICOM)’s mandate to coordinate the region’s response to climate change, the ‘Five Cs’ has been seeking financial support investigating and pooling regional resources to help countries cope with the expected impacts since its birth in 2004. These days, they are introducing and training regional planners in the application and use of a suite of tools that will help leaders make their countries climate-ready. St Lucian government officers becoming familiar with tools at a recent workshop in St Lucia. As part of the training, they will use the tools to assess planned developments and weather conditions over six months to provide data and information which could be used for a variety of projects. Credit: Zadie Neufville/IPS

The experts believe that preparing the region to deal with climate change must include data collection and the widespread use of variability, predictability and planning tools that will guide development that mitigate the impacts of extreme climatic conditions.

The recent Caribbean Marine Climate Report card reflects the findings of the latest Inter-governmental Panel on Climate Change (IPCC) report, pointing to the need for countries to ramp up their adaptation strategies. Both highlight the many significant risks climate change is expected to bring to regional economies that depend heavily on eco-systems based industries; where major infrastructure are located along the coasts and where populations are mainly poor.

The report points to the threats to biodiversity from coral bleaching; rising sea temperature and more intense storms which could destroy the region’s economy, and in some cases inundate entire communities.

The tools not only allow the users to generate country specific forecast information, they allow Met Officers, Disaster Managers and other critical personnel to assess likely impacts of climatic and extreme weather events on sectors such as health, agriculture and tourism; on critical infrastructure and installations as well as on vulnerable populations.

Training is being rolled out under the Climate Change Adaptation Program (CCAP) in countries of the Eastern and Southern Caribbean, with funding from the United States Agency for International Development (USAID). CCAP was designed to build on both USAID’s Regional Development Cooperative Strategy which addresses development challenges in the countries in that part of the region, as well as the CCCCC’s Regional Framework for Achieving Development Resilient to a Changing Climate and its associated Implementation Plan, which have been endorsed by the Heads of Caribbean Community (CARICOM) countries.

Regional experts and government officers working in agriculture, water resources, coastal zone management, health, physical planning and disaster risk reduction from Antigua and Barbuda, Barbados, Dominica, Grenada, Guyana, St. Kitts and Nevis, St. Lucia, St. Vincent and the Grenadines, Suriname and Trinidad and Tobago are being taught to use a variety of tools.

The program aims to build resilience in the development initiatives of the countries as they tackle climate change-induced challenges, which are already being experienced by countries of the region.

At a recent workshop in Rodney Bay, St. Lucia, trainees were confident that the tools could become critical to their developmental goals. St Lucian metrological forecaster Glen Antoinne, believes the tools could be “useful for St Lucia because they are directly related to our ability to forecast any changes in the climate”.

He looks forward to his government’s adoption of, in particular, the weather tools to  “support the climatology department in looking at trends, forecasting droughts and to help them to determine when to take action in policy planning and disaster management”.

The tools work by allowing researchers and other development specialists to use a range of climatic data to generate scientific information and carry out analysis on the likely impacts in the individual countries of the region. They are open source, to remove the need for similar expensive products being used in developed world, but effective, said INSMET’s Dr. Arnoldo Bezamilla Morlot.

“We saw the need to develop a drought tool that was not only easy to use, but free to the countries of the Caribbean so they would not have to spend large amounts of money for software,” he said.

CCAP also includes activities aimed at the expansion of the Coral Reef Early Warning System for the installation of data gathering buoys in five countries in the Eastern Caribbean providing data which, among other things will be used for ecological forecasts on coral bleaching and other marine events.

The project also provides for the strengthening of the hydro meteorological measurement systems in participating countries. This will allow for better monitoring of present day weather parameters and for generating data to feed into the climate models and other tools.

Among the tools being rolled out under the project are the Caribbean Assessment Regional DROught (CARiDRO) tool; the Caribbean Weather Generator, and the Tropical Storm Model which were designed to help experts to develop scenarios of future climate at any given location and to use these to more accurately forecast the impacts, and inform mitigating actions.

There are accompanying web portals and data sets that were developed and are being introduced to help countries to enhance their ability to reduce the risks of climate change to natural assets and populations in their development activities.

These online resources are designed to provide locally relevant and unbiased climate change information that is specific to the Caribbean and relevant to the region’s development. Their integration into national planning agendas across the region is being facilitated through regional and country workshops to ensure effective decision-making while improving climate knowledge and action.

“The resulting information will help leaders make informed decisions based on the projections and forecasting of likely levels of impact on their infrastructure and economies,” Lavina Alexander from St Lucia’s Department of Sustainable Development noted, pointing to that country’s recent experiences with hurricanes and extreme rainfall events.

As one of the tool designers, Morlot believes that by providing free access to the tools, the project is ensuring that “more countries will begin to collect and use the data, providing regional scientists with the ability to make more accurate forecasts of the region’s climate.”

Putting all the information and tools in one place where it is accessible by all will be good for the region, he said.