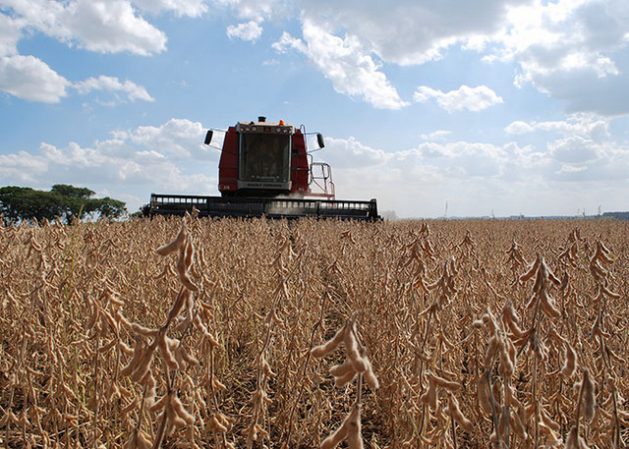 The soybean harvest this year in Brazil will hit record levels and reaffirm that the country is about to displace the United States as the world’s top producer of soy. Credit: Embrapa

RIO DE JANEIRO, Aug 17 2017 (IPS) - “Our wealth lies in the climate, not in the land,” said Antonio Galván, president of the Rural Union of Sinop, a municipality created just 37 years ago, which has prospered due to the continued expansion of soy in Brazil.

Sinop, population 133,000, is the biggest city in northern Mato Grosso, a state in west- central Brazil which has experienced a major expansion of the agricultural frontier since the 1970s, and is currently the leading national producer of soy, accounting for 27 per cent of Brazil’s production.

“We have 14 to 15 million hectares of land available to expand soybean crops by 150 per cent in Mato Grosso, with no need to deforest,” Galván told IPS from Sinop.

For this reason, “it is a natural tendency,” he said, for Brazil to soon overtake the United States as the world’s leading producer of soy, as the United Nations Food and Agriculture Organisation (FAO) and the Organisation for Economic Co-operation and Development (OECD) predict, in the report “2017-2026 Agricultural Outlook”.

More or less regular rainfall from October to May is the main factor for the growth of agriculture in northern Mato Grosso, explained Galván.

Besides soy, which is planted at the start of the rainy season and harvested about four months later, other crops are also planted, but at the end of the rainy season – generally cotton and maize, of which Mato Grosso has also become the biggest producer in the country in the past four years.

State-owned lands, divided between the “Cerrado” ecoregion – the Brazilian savannah – and the Amazon forest, used to be undervalued for their low fertility, until they became the new agricultural frontier.

Galván, originally from the far south of Brazil, moved to Sinop in 1986, when land was still cheap. “Soybean was just starting in Sinop when I came, the local economy was only based on livestock and logging,” he recalled.

That year, Mato Grosso produced 1.9 million tons of soybean. But by 2016 the state’s soy crop reached 26.03 million tons, and this year it is expected to increase between 11 and 12 per cent, according to the Agriculture Ministry’s National Supply Agency.

Many of the migrants from southern Brazil who founded and settled in Sinop did not share that prosperity reflected in one of the highest human development rates in Brazil’s hinterland. “They went bankrupt and returned to their places of origin,” defeated by the harsh living conditions and lack of transport at the beginning, lamented Galván.

The city’s name comes from the initials (in Portuguese) of the company that “colonised” the area, the Real Estate Company of Northeastern Paraná (a southern state), buying lands, building the first houses and streets, and attracting families to an illusory El Dorado. 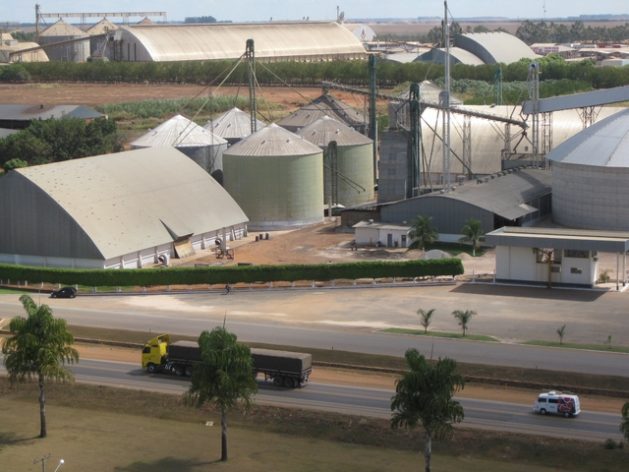 Complex of soy and maize storehouses and processing plants in Lucas Rio Verde, in the heart of the state of Mato Grosso, the country’s main producer of soy, maize and cotton, in west-central Brazil. Credit: Mario Osava/IPS

This is how Brazil’s Amazon region was populated, with the 1964-1985 military dictatorship promoting internal migration, which expanded the deforestation and provoked land conflicts, massacres of indigenous people and malaria epidemics.

The production of soy also expanded from south to northwest, although more slowly.

Soy began to be grown in Rio Grande do Sul, the southernmost state, in 1914, because it had the most temperate climate, the only one suitable at the time. The expansion began in 1970, when national output was just 1.5 million tons.

In a decade production rose tenfold, and it more than doubled again in the 1990s, advancing towards the north until Mato Grosso took the lead in production in 2000.

While production stagnated in the south, in Mato Grosso it tripled so far this century, and expanded to previously inconceivable areas, such as the Northeast, including the semi-arid parts, and the humid northern Amazon region.

Soy became the main national agricultural product, representing half of the production of cereals, pulses and oilseeds, and the largest export revenues: 25 billion dollars in 2016. The rural map and economy of Brazil changed radically in the process.

“The main obstacles for the expansion of soy are infrastructure and logistics. On the large agricultural estates technology continues to improve while productivity grows, with yields approaching the U.S. average of 3,730 kilos per hectare,” said Alexandre Cattelan, head of Technology Transfer in Embrapa Soy.

Embrapa (Brazilian Agricultural Research Corporation), created in 1973 by the Agriculture Ministry, is a complex of 47 specialised units, including Embrapa Soy, scattered around the country.

It played a decisive role in the adaptation of soy to Brazil’s tropical climate, with increasing productivity. Output, using new seeds and techniques, increased 6.17 times, while the cultivated area grew 3.82 times since 1980.

“We have the land and know-how to overtake the U.S., but we lack proper roads, ports, railways and sufficient storage facilities,” Cattelan told IPS. This year, because of a record harvest, the storehouses are full and there is no space for the maize that is now being harvested.

Highway BR163, which crosses the most productive area in Mato Grosso and runs to the river ports in the Amazon, is the shortest way for exporting locally produced soy and maize. But it still has an unpaved 100-km stretch and is impassable during the rainy season.

Adequate seeds and the use of lime, fertilisers and micronutrients to improve the soil helped to expand the crop to the Cerrado savannah region, said Cattelan, an agronomist who has a PhD in soil microbiology.

Direct seeding, which excludes plowing of the earth and involves covering it with straw, the inoculation of bacteria which fix nitrogen in the soil, reduce costs and environmental damage, such as the contamination of the water table, he said.

A bottleneck for the production of soy could be a slowdown in the consumption of protein in China, from a 7.9 per cent increase in the last decade to a 2.3 per cent increase over the next decade, according to the FAO and OECD report.

The report also projects a lower level of growth of per capita consumption of food in the countries of the developing South, from 1.1 per cent against the previous 3.1 per cent, and the stabilisation of the use of vegetable oils for making biodiesel.

Moreover, the expansion of soy generates controversy, especially because of the intense use of genetically modified seeds and agrochemicals, sald Alice Thuault, associate director of the non-governmental Instituto Centro de Vida (ICV), which operates in northern Mato Grosso.

In 2011, a study identified toxic agrochemicals in the breastmilk of many women in Lucas do Rio Verde, a municipality next to Sinop.

The production of soy also drives the deforestation of the Amazon forest, although in a much lower proportion than livestock production, which “occupies 50 to 70 per cent of the recently deforested areas,” Thuault told IPS.