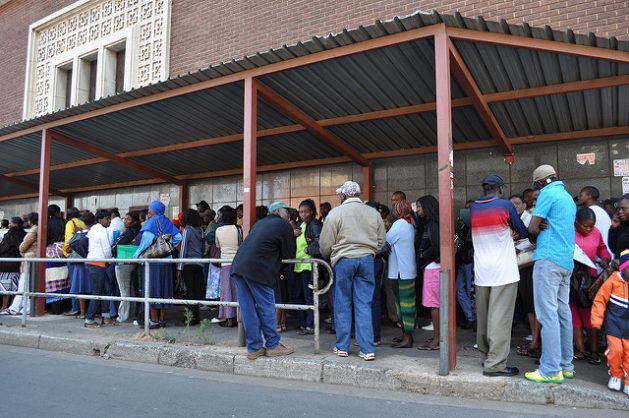 HARARE, Oct 19 2017 (IPS) - At the dawn of the millennium, Sheila Mponda, 60, waved goodbye to her four children, who were leaving Zimbabwe for the United Kingdom in search of greener pastures. Mponda had just lost her husband and had been a housewife all her life.

While the parting was bittersweet, since they established new lives abroad, Mponda’s children have faithfully sent her money to provide for her needs.

“Slowly trust is being built between the government and the diaspora and enquiries from the diaspora associations have been coming in on how they can work together with government in national development.” --IOM Zimbabwe Chief of Mission Lily Sanya

“As a widow, people would expect me to live in abject poverty – with old age, no skills and a late husband.  But my children overseas have been a miracle,” she said.

They all hold down multiple jobs to sustain their families in the United Kingdom as well as back home. “[But] where would they be working [in Zimbabwe] with this current economy?” Mponda told IPS.

Dewa Mavhinga, the Southern Africa Director of Human Rights Watch, explained that family-level remittances from the diaspora are very important as they keep families in Zimbabwe afloat and mean the difference between survival and starvation for many.

“The collapse of the Zimbabwean economy due to poor governance has made it difficult for the government to harness funds from the diaspora and make good use of them for sustainable development,” Mavhinga told IPS.

He stressed the need for the government to restore public trust and confidence in its willingness to protect people’s investments in its effort to lure more funding from the diaspora.

Dr. Prosper Chitambara, an economist at the Labour and Economic Development Research Institute of Zimbabwe (LEDRIZ), told IPS that remittances from the diaspora are only mitigating extreme poverty, serving as social protection rather than financing development.

‘The uncertainty in the country is affecting [it] to fully utilize and better harness remittances from the diaspora as no one would want to invest money in an unstable environment,” Dr Chitambara said.

He suggested the need for government to issue diaspora bonds, clarify the issue of dual citizenship and allow member of the diaspora to vote in elections.

“Government should engage people in the diaspora on how they can best work together for the development in the country,” Dr Chitambara added.

Last year, the International Organization for Migration (IOM) together with the government of Zimbabwe launched the Zimbabwe National Diaspora Directorate to enhance engagement and participation of the Zimbabwe diaspora on national development.

IOM Zimbabwe Chief of Mission Lily Sanya said, “We encourage the government to get to know its diaspora by mapping their locations, compiling inventories of their skills and experience, and engaging a wide range of the diaspora in listening events to understand what the diaspora is willing to offer and what it expects from the government in turn, as this lays the foundation for good communication and mutual trust-building.”

IOM is currently implementing a project dubbed “Promoting Migration Governance in Zimbabwe”, which seeks to provide capacity to the government to better manage migration issues.

“IOM aims at creating platforms to promote dialogue between government and the Zimbabwean Diaspora for the latter to participate in governance and national development,” Sanya said.

In October 2016, IOM facilitated the initial diaspora engagement meetings for government in the UK, Canada and South Africa.

“Slowly trust is being built between the government and the diaspora and enquiries from the diaspora associations have been coming in on how they can work together with government in national development,” Sanya told IPS.

A skills transfer program has been put in place, where Zimbabwean experts abroad can come back home on short-term assignments to build the capacity and skills of local professionals in the health and education sector.

“IOM has also been assisting irregular Zimbabwean migrants in foreign countries to return home with dignity under IOM’s Assisted Voluntary Return and Reintegration programme. They are supported to start small businesses of their choice to help them reintegrate into society,” Sanya said.

In addition, IOM aided the government to formulate its National Diaspora Policy and action plan for the 2017–2022 period.

“Support is being provided to government through the Ministry of Public Service Labour and Social Welfare (MoPSLSW) formulate the National Labour Policy which will ensure protection of the rights of Zimbabwean migrant workers abroad,” Sanya said.

For Zimbabweans in South Africa, the South African government has announced an extension of special permits for nearly 200,000 economic migrants by four years. This only applies to those already in possession of the permits, not new applicants.

“The government of Zimbabwe should make a fresh call for new applicants as there are likely more Zimbabweans undocumented in South Africa than those with special permits. This can help the government of Zimbabwe to document Zimbabweans and to place them in a formal tax role for them to contribute to the South African economy,” Mavhinga of HRW said.

The South African Minister of Home Affairs Hlengiwe Mkhize stressed that the extension was due to the worsening economic situation, but the permits are not a path to permanent residency.  As such Zimbabweans are expected to return home.

According to the Department of Home Affairs, more than one million people have sought asylum in South Africa. The majority of them are Zimbabweans, while others have come from Nigeria, Ethiopia and Mozambique, among other African countries. About 50-150 people are arrested each day as they attempt to renew their permits.

Speaking to the website Refugees Deeply, Gabriel Shumba, the director of the Zimbabwe Exiles Forum, said, “We have visited Lindela Repatriation Centre and noted with serious concern that those arrested for deportation include those either attempting to apply for or renewing asylum and refugee status.”