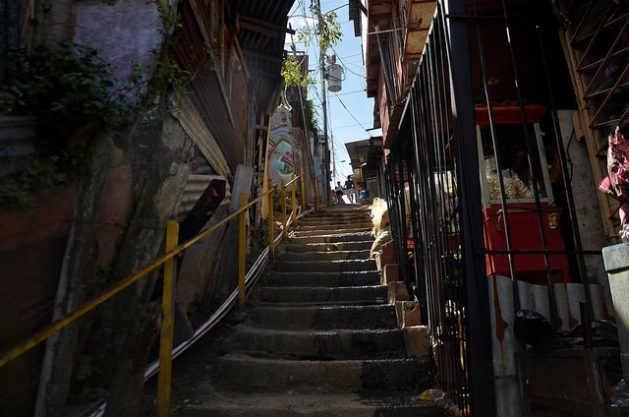 A young couple walk down a steep stairway in La Carpio, a poor neighbourhood on the outskirts of San José, Costa Rica. About half of the young people living in communities like this one in Central America say they would migrate if they could. Credit: Josué Sequeira/IPS

San Jose, Jul 25 2018 (IPS) - La Carpio is an island of poverty on the outskirts of Costa Rica’s capital, surrounded by the country’s most polluted waters – the Torres River – on one side and a massive garbage dump on the other.

A sewage treatment plant that processes wastewater from 11 cities is also next to the slum, where nearly 25,000 people live in unpainted houses and shacks, interspersed with street markets, more than seventy bars and a hundred or so churches of different faiths, about 10 km from downtown San José.

This impoverished community holds the stories of thousands of Costa Ricans and Nicaraguans; it is the largest community of migrants from that neighbouring country in Central America. Most of them are young people who had to migrate because of inequality and fear of violence of different kinds.

"On average, the difference between countries of origin and destination worldwide in terms of income is one to 70, and it is estimated that in about 25 years we will be talking about a difference of 100 to one. In this world, it will not be easy to convince migrants not to migrate to where the income and quality of life can be found.” -- Salvador Gutiérrez

On average, almost half of the residents between the ages of 14 and 24 of poor Central American neighbourhoods similar to La Carpio, such as Jorge Dimitrov (Managua), El Limón (Guatemala City), Nueva Capital (Tegucigalpa) or Popotlán (San Salvador), say they would leave their countries… if they could.

This was reported by a study by the Institute of Social Research of the University of Costa Rica (UCR), which interviewed 1,501 young people from these five poor neighbourhoods on the outskirts of Central America’s capital cities, partly released in June under the title “Central America torn apart. Demands and expectations of young people living in impoverished communities.”

The study was based on 300 interviews with young people from each community conducted at their homes during the last quarter of 2017, with the help of nearly 100 pollsters recruited in those communities.

In these neighbourhoods, on average almost two-thirds of young people see the distribution of wealth as “very unjust” or “unjust”, about half say they have recently been afraid of the violence around them and the same percentage believe “their fate does not depend on them.”

In Popotlán, in the municipality of Apopa, outside of San Salvador, 76 per cent of young people under 24 said they wanted to migrate, while in the neighbourhood in Tegucigalpa the proportion was 60 per cent, in La Carpio 50 per cent, in Guatemala City 49 per cent and in Managua 47 per cent.

The young people of Popotlán are surrounded by violence, and face the stigma of living in an area ruled by different gangs, while suffering a lack of access to an adequate diet and to healthcare.

“Maria” (not her real name) is well aware of these problems. She lives in this neighbourhood and heads a community organisation that supports young people with food and education. A few days after the interview she asked that neither her name nor the name of her organisation be mentioned, after several murders in the area.

“Being young here would appear to be a crime. Usually, young people say happily, ‘I’m going to be of legal age soon’, but that doesn’t happen here. Here they’re afraid the police will catch them because they’re young, not so much because they’re in a gang, but just because they live in this neighbourhood. When looking for work it’s very hard to say you’re from Popotlán,” she told IPS in a telephone conversation.

Youth, the dominant feature of migration

Salvador Gutiérrez, regional liaison and policy officer at the International Organisation for Migration (IOM) Regional Office for Central America, North America and the Caribbean, said the central feature of migration in this region is youth. 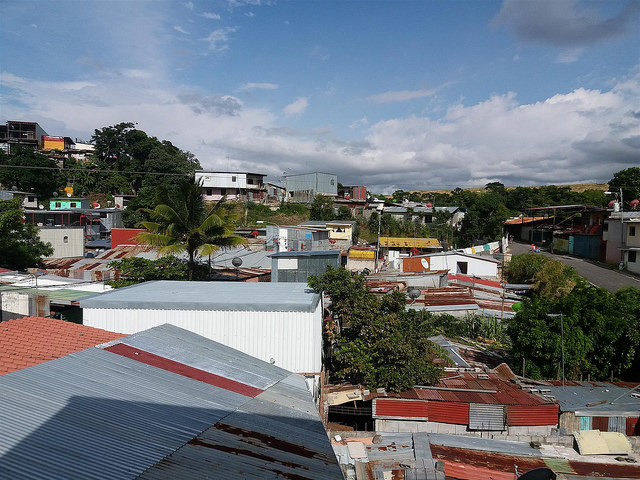 Corrugated iron roofs predominate in the populous neighbourhood of La Carpio, on the outskirts of San José, Costa Rica, where an estimated half of the houses are built with inadequate materials. Credit: Daniel Salazar/IPS

“In general, the age group that migrates the most are people between 14 and 24, in the case of Central America. What is clearly seen as a differentiating element in the case of youth migration is the fact that these people are looking to build an entirely new future,” he told IPS at the regional office in San José.

Young Central Americans are also different from other migrants because they are fleeing violence and crime, often suffered personally, or they want to be reunited with their families who already live in other countries.

The stigma of being young in Popotlán leads many to migrate, but others like the community activist Maria decide to stay and fight for the youth of the neighbourhood, “in an area where the state is barely present.” Five of the young people she helps are about to enter university.

“Living is a miracle, and we try to encourage them to discover the values they can offer to others…One young man told me that he wanted to go to college, and that he wanted his parents to be proud of him. Sometimes it hurts a lot when your own family doesn’t believe in you,” Maria said.

Carlos Sandoval, coordinator of the UCR study, told IPS that 31 years after the Esquipulas II Agreement, which in its preamble stated that it was aimed at young people and that it established measures to bring about “lasting peace” in the region, “Central America is still torn apart.”

“Even the main achievement of electoral democracy as a mechanism of political legitimation is falling apart. Perhaps what this study contributes is that there is a lack of ideas on how to think about Central America,” he said.

“Let us not be surprised if what is happening in Nicaragua opens a new cycle of social unrest,” he said, referring to the demonstrations and uprising that broke out in that country in April, and which is not waning despite the fact that a brutal crackdown has already caused more than 370 deaths, mostly young people, and has triggered a wave of emigration.

This situation was experienced by Mario de León, who was born in Nicaragua and grew up in La Carpio, with a mother who raised her four children on her own.

He came to La Carpio when he was six years old, he said as he accompanied IPS around the neighbourhood. His family had lost everything in Nicaragua during the war, had moved to Guatemala for some time and arrived in Costa Rica in the mid-1990s.

“It was horrible in school. The school was made of four corrugated iron sheets, a roof and a dirt floor. It leaked when it rained, we would have blackouts, and we would have to go home. But I would stay there studying as the water ran down the walls. I tried to motivate myself,” he said.

Not until this year did a modern primary school open in La Carpio, serving some 2,100 students. Although access to education already existed, ensuring quality services for communities like this is often a task where the state shows up late, if at all.

In the neighbourhoods surveyed, the vast majority of young people (between 64 per cent in Costa Rica and 79 per cent in El Salvador) said they did not care whether the government was “democratic or not,” but simply wanted it to “solve problems.”

For the IOM’s Gutiérrez, the study highlights that cooperation and aid for these countries to develop are crucial if the issue of migration is to be addressed.

“We must work on the structural causes of migration: poverty, inequality, security and development opportunities in a broad sense,” he said.

For him, that means creating opportunities for the regularisation of migrants, cooperating to address public security, and reducing inequality within and, above all, between countries.

“On average, the difference between countries of origin and destination worldwide in terms of income is one to 70, and it is estimated that in about 25 years we will be talking about a difference of 100 to one. In this world, it will not be easy to convince migrants not to migrate to where the income and quality of life can be found,” he said.

That is why, the UCR study states, half of the young people in the poor communities of Central America think that having a future depends on emigrating.