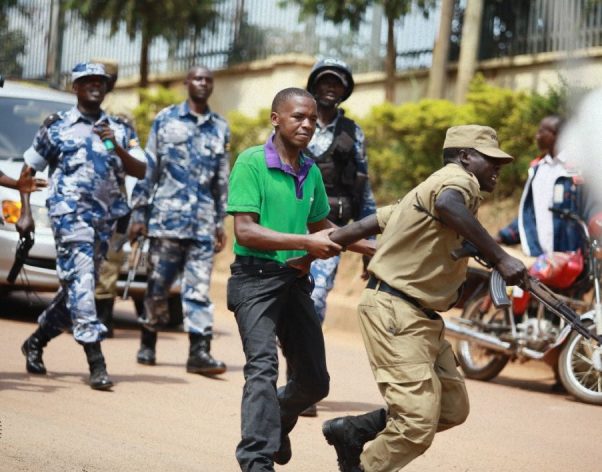 KAMPALA, Sep 27 2018 (IPS) - Last month, a horrifying video circulated on social media in Uganda. It shows Reuters photographer, James Akena, surrounded by Uganda Peoples Defence Force soldiers who beat him as he raised his hands in the air in surrender. He was unarmed and held only his camera.

Akena suffered deep cuts to his head and injuries on his hands, neck and fingers for which he had to be hospitalised. He is yet to resume work.

But a month after Akena’s torture, there is no evidence that the soldiers who assaulted him have been punished, despite the Ugandan army issuing a statement against the soldiers’ unprofessional conduct, saying orders had been issued for their arrest and punishment.

Uganda’s Chief of Defence Forces General David Muhoozi insisted in an interview with IPS that action was being taken against his soldiers.

“We don’t need anyone to remind us that we need to [hold] those who commit torture to account. Those ones who assaulted the journalist, we are going to take action. They have been apprehended. So it is within in our DNA to fight mischief,” Muhoozi told IPS.

Akena was photographing protests against the arrest and torture of popular musician turned politician Robert Kyangulanyi, popularly known as Bobi Wine. He had been in the process of taking photographs that would expose the brutal conduct of the army and the police while they dispersed demonstrating crowds.

A week later, president Yoweri Museveni told members of parliament from his ruling National Resistance Movement party that his security had told him Akena had been mistaken for a petty thief taking advantage of the demonstration.

Human Rights Network For Journalists – Uganda (HRNJ) executive director Robert Sempala told IPS that the abuse of journalists has continued despite assurances from the army and Uganda Police Force. He said about 30 journalists have been beaten by the army between Aug. 20 and Sept. 22, 2018.

“They insist that they arrested those soldiers but the army has not disclosed their identities. So we are still waiting to see that they are punished or else we shall seek other remedies, including legal action,” Sempala said.

Maria Burnett, an associate director at Human Rights Watch in charge of East Africa, expressed doubt whether the arrest of those who tortured Akena would mean that journalists would not be beaten in the future.

“Security forces have beaten journalists with limited repercussions for years in Uganda. Other government bodies then censor coverage of army-orchestrated violence.

“Beating journalists serves two purposes: It scares some journalists from covering politically-sensitive events, and, at times, it prevents evidence of soldiers beating or even killing civilians from reaching the public,” Burnett said in a statement.

She said threatening and intimidating journalists curtailed the public’s access to information – information they could use to question the government’s policies.

“With more and more cameras readily available, beating or censoring the messenger isn’t feasible in the long term. It will only lead to more fodder for citizen journalists and more questions about why the government resorts to violence in the face of criticism,” observed Burnett. 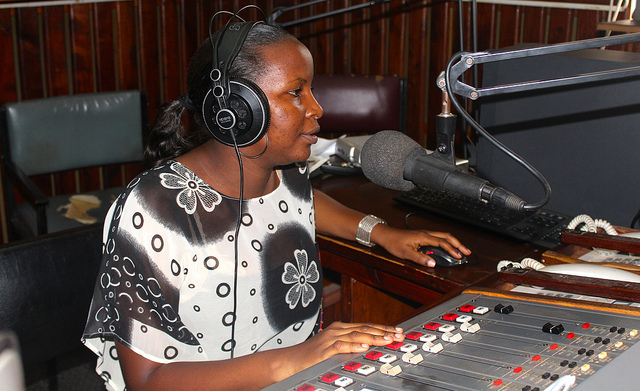 The Ugandan government uses its national laws to bring charges against journalists, revoke broadcasting licenses without due process of law, and practice other forms of repression. In this dated picture Laila Mutebi, 26, presented the Evening Voyage, on Uganda’s 101.7 Mama FM. Credit: Amy Fallon/IPS

Dr. Peter Mwesige, a media scholar and head of the African Centre For Media Excellence, said: “This is unacceptable. We call upon the government to rein in members of the armed forces who are now presiding over this frightening erosion of press freedom and free expression in Uganda. As we have said before, press freedom and freedom of expression are not just about the rights of journalists and the media to receive and disseminate information.”

He said stopping journalists from covering political protests and violence denied citizens access to information about what was going on in their country.

“No degree of imperfections in our media ranks can justify the wanton abuse that security forces have visited on journalists,” said Mwesige.

Sarah Bireete, the deputy executive director at the Centre for Constitutional Governance, told IPS that the violence against journalists was part of the shrinking civic space in Uganda.

She said there were efforts to silence civil society groups who worked in the areas of governance and accountability.

“Such abuses also continue to extend to other groups such as journalists and activists that play a key role in holding governments and their bodies to account,” said Bireete.

The Ugandan government uses its national laws to bring charges against journalists, revoke broadcasting licenses without due process of law, and practice other forms of repression.

The Uganda Communications Commission (UCC) has used ill-defined and unchecked powers to regulate the media.

The UCC, for instance, issued on Sept. 19 a directive to radio and TV stations in Uganda restricting them from carrying live coverage of the return of Kyangulanyi to the country. The legislator was returning from the United States where he had gone for treatment after he had been tortured by the army. Most of the media outlets heeded the directive.

The government has moved further to restrict press freedom by restricting the number of foreign correspondents in Uganda.

The Foreign Correspondent’s Association in Uganda (FCAU) on Sept. 12 issued a statement calling on the Uganda government to stop blocking journalists from accessing accreditation.

It said at least 10 journalists wishing to report in Uganda had not been given government accreditation even after they had fulfilled all the requirements.

“Preventing international journalist from working in Uganda adds to a troubling recent pattern of intimidation and violence against journalists. Stopping a number of international media houses from reporting legally inside Uganda is another attempt to gag journalists,” read the statement.

Section 29(1) of the Press and Journalists Act requires all foreign journalists who wish to report from Uganda to get accreditation from the Media Council of Uganda through the Uganda Media Centre. The journalists are required to pay non-refundable accreditation fees depending on their duration of stay in the country.

IPS has learnt that a number of journalists have since returned home after failing to secure accreditation.

Uganda Media Centre director Ofwono Opondo told IPS that the government has not stopped the accreditation of foreign journalists but was reviewing the guidelines.

Magelah Peter Gwayaka, a human rights lawyer with Chapter Four, a non-profit dedicated to the protection of civil liberties and promotion of human rights, told IPS: “Not long ago we had a BBC reporter, Will Ross, who was deported. The implication is to force journalists to cower down, to stop demanding accountability, to stop demanding all those things that democracy brings about.”

“So if the army is going to stop demonstrators and it beats up journalists like we saw the other day, no civil society [can stand] up to say please can we account? Can we have these army men arrested?” Gwayaka said.