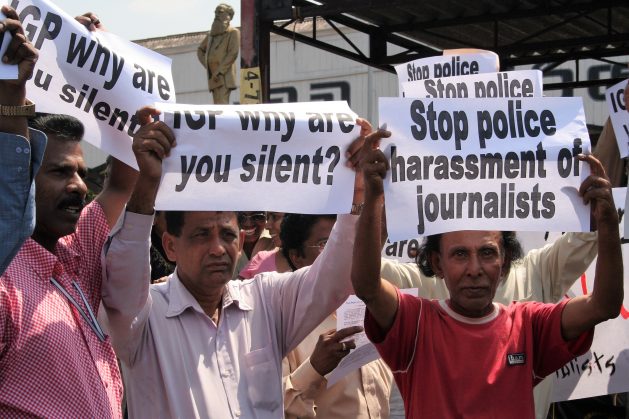 Sri Lanka's media has been under pressure for most of the past decade and only gained some breathing space since the 2015 presidential election. Credit: Amantha Perera/IPS

COLOMBO, Jul 18 2018 (IPS) - Journalists and media activists have cautioned against Sri Lanka’s newfound press freedom as the country heads to the polls in 2020. Separate incidents of hate-speech against a Muslim minority—and the subsequent shutdown of social media platforms—and the harassment of reporters critical of the country’s opposition have led some to believe that the changes in media independence could reverse.

In the latest world press freedom rankings by Reporters Without Borders, Sri Lanka is listed 131 out of 180 countries across the globe—a marginal improvement from its 2014 ranking of 165.

The unexpected 2015 electoral victory for current president Maithripala Sirisena, who championed greater press freedom during his campaign, was responsible for this island nation’s rise on the index.

But Shan Wijethunge, head of the Sri Lanka Press Institute, the island’s premier media training centre, is apprehensive as he takes stock of what has transpired over the last six months.

In February, the government lost the local government elections to a resurgent opposition led by ex-President Mahinda Rajapaksa, which prompted opposition supporters to increase the tempo of their anti-government campaign. Many became critical of the New York Times (NYT) and its Sri Lanka journalists who reported that Rajapaksa had allegedly received funds from Chinese state companies. In a delicately balanced national political scenario, the reporters who worked on the story were accused of working for a pro-government agenda and their independence was questioned.

“The journalists were criticised and trolled rather than [there being] any challenge on the contents of the story, because what matters right now is setting the headlines,” Wijethunge told IPS.

Family and friends of the NYT journalists in Sri Lanka said that they were shocked at the personal level of the attacks and pointed out that there had been no requests for the story to be retracted.

“They just felt so vulnerable, as if things suddenly regressed by three years. It just shows how quickly things can get bad here,” said a colleague of the harassed journalists. He requested to remain anonymous due to the fear of being targeted.

It was only less than a decade ago when the Editor-in-Chief of the Sunday Leader, Lasantha Wickrematunge, was assassinated in 2009—just months before the country’s 26-year civil war ended. A year after Wickrematunge’s death, cartoonist Prageeth Eknaligoda disappeared.

However, there are signs that media freedom has improved on the island nation.

In 2016 when the respected regional magazine Himal Southasian came under increased bureaucratic pressure in Nepal, where it had been operating since 1996, the Sri Lankan capital Colombo became the obvious choice for relocation. In March, the magazine opened a new office in a Colombo suburb. Amnesty International also now has a regional office in the capital.

But many are concerned that if the upcoming 2020 presidential election proves to be a tight race, there will be heightened pressure on journalists to toe the line.

Not only that, the recent shut down of social media platforms across the country has left analysts concerned that freedom of speech in general could be targeted.

In March, parts of Sri Lanka’s Central Province experienced a wave of anti-Muslim riots that led to a weeklong shutdown of the social media platforms Facebook, Whatsapp, Instagram and Viber. The government blamed the riots on hate speech against the minority Muslim community that was spread over the various platforms. After meeting with Facebook, which owns Whatsapp and Instagram, the government unblocked the platforms.

“It was a knee jerk reaction, but it is a reaction that is again possible in the future, especially when we are heading into elections,” Wijethunge said.

He feels that social media was targeted because that is where Sri Lankans tend be freest in airing their views and disseminating news.

Facebook data shows that there are between five to six million accounts of Sri Lankan origin, generating one billion posts on Facebook, Whatsapp and Instagram each month. Even politicians like president Sirisena, ex-president Rajapaksa and his son Namal Rajapaksa have been using their Facebook and Twitter profiles as integral parts of campaigning and reaching out to their constituencies.

Sanjana Hattotuwa, a senior researcher with the think-tank Centre for Policy Alternatives, has extensively researched the impact social media has on voters. His research shows that for a quarter of the country’s eligible voters, those within the age bracket of 18 to 34, social media is the primary platform of political interaction.

“Misinformation and disinformation are clearly engineered to heighten their anxieties and anger,” he said, referring to fake news content.

Hattotuwa’s research also shows that hate speech, trolling and fake news were quite visible on accounts and groups originating in Sri Lanka long before the March riots. He said these should have been tackled in a much more organised and professional manner with technology and human vetting playing an important role. He said he feared that old political games could be at play on these new forums.

“The growth of social media and the spread of internet access, in Sri Lanka, cannot be equated with a stronger democracy, and the growth of liberal government. The weaponisation of social media needs thus to be seen as the latest strategy of an older political game.”

With its growing popularity, Wijethunge feels social media is now the main vector for political news and sentiment.

Given that there is no effective countering of fake content and misinformation other than outright blocking, “it will be the testing ground where we will see all these freedoms gained in the last three and half years are really sustainable or just an illusion.” More so as the criticism of the government increases.