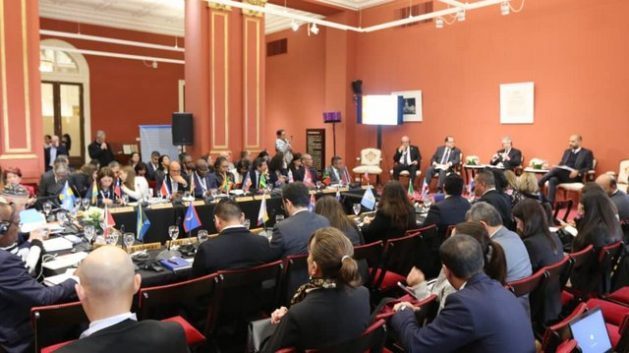 BUENOS AIRES, Oct 16 2018 (IPS) - Although their contribution to global warming is negligible, Caribbean nations are bearing the brunt of its impact. Climate phenomena are so devastating that countries are beginning to prepare not so much to adapt to the new reality, but to get their economies back on their feet periodically.

“We live every year with the expectation that we will have to go through the experience of rebuilding our communities and our infrastructure,” Molwyn Joseph, Antigua and Barbuda’s minister of health, wellness and the environment, told IPS in the Argentine capital.

“We try to adapt to climate change by building more resilient infrastructure, but the adaptation is not the main issue in our minds. We are thinking about recovery after disasters,” added the environment official of the small island state of some 100,000 inhabitants, located between the Caribbean Sea and the Atlantic Ocean.

“Our ability to feed ourselves has always been highly vulnerable and today, when we look at our agricultural sector, what we see are increased flooding and increased droughts, making things extremely difficult." -- Simon Stiell

Joseph was one of the participants in the Forum of Environment Ministers for Latin America and the Caribbean, held Oct. 9-12 in Buenos Aires, with the participation of authorities from the 33 countries of the region, organised by U.N. Environment.

As an example of the violence of the current climatic phenomena, the minister cited hurricanes Irma and Maria, which in September 2017 led to the total evacuation of the population of the island of Barbuda to Antigua and which also seriously affected the neighbouring island of Dominic

In his opinion, it is the industrialised nations, which are mainly responsible for global warming, that should assume the economic cost of the recovery of countries like his, after extreme climatic phenomena.

“We are pleased that we are able to get the assistance for adaptation and mitigation of climate change. But how about the assistance for rebuilding your country after the disasters? We do not have the resources to face something like that every year,” Joseph complained.

In the Buenos Aires Declaration, signed at the conclusion of the meeting, reference was made to United Nations Resolution 71/225, adopted by the General Assembly in February 2017, which recognised that small island developing states suffer unique and particular vulnerabilities.

The ministers meeting in the Argentine capital said the international community must review the progress made in addressing the priorities set for the Caribbean nations, recognised for their environmental fragility, economic and geographic isolation and limited resources.

“There’s a question as to whether we can adapt at all to climate change,” said Lorna Innis, coordinator of the Secretariat of the Cartagena Convention, adopted in 1983 to protect the marine environment in the Caribbean. 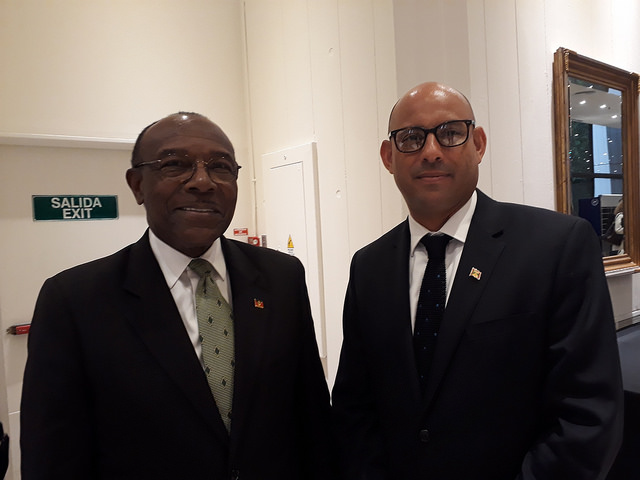 The ministers of Antigua and Barbuda, Molwyn Joseph (L), and of Grenada, Simon Stiell, during the Forum of Environment Ministers for Latin America and the Caribbean, held in Buenos Aires. Both demanded that industrialised nations pay the costs generated in their countries by extreme climate phenomena. Credit: Daniel Gutman/IPS

Innis, a biologist born in Barbados with her office in Kingston, explained: “On an island like Barbados, that is 14 miles wide at its widest point and 21 miles long at its longest point, how much adaptation can you do?”

“You can retreat from the shore-line all your houses, hotels and restaurants, you keep moving them back, but your land space is limited,” she told IPS. “We already have 1,100 people per square mile in Barbados, one of the most densely populated islands in the world. Where are they going to go?”

Innis said the extreme winds that are frequent today cause the world-famous Caribbean beaches to lose tons of sand in one night.

“You may have a beach that was a hundred-feet wide. And you wake up the next morning and it’s ten feet wide. And that’s a major impact, because there are some islands that do well in terms of agriculture, there are some island that have some oil and gas or some other things, but none of them come close to the level of economic activity that the countries get from tourism,” she added.

Innis said the Caribbean island nations need much more help and support than they receive. She pointed out that because of their size, their technical capacity to confront the challenge at a national level is limited.

All of the ministers agreed on that point during the regional forum.

However, the United Nations Development Programme (UNDP) director for Latin America and the Caribbean, Luis López-Calva, warned of a problem with the financial assistance they are demanding.

Since most of them are considered middle-income, the Caribbean countries are excluded from access to certain aid funds, he told IPS. 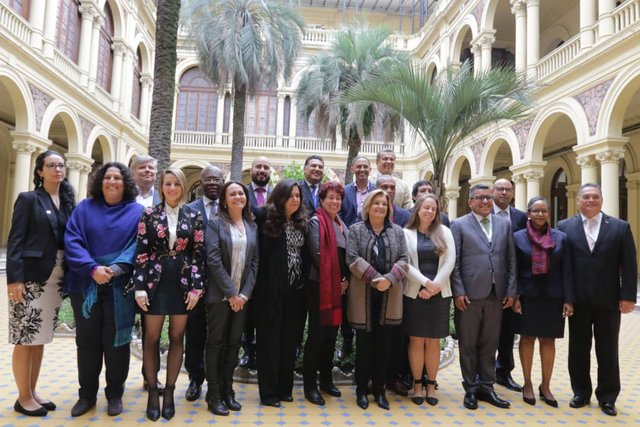 A family photo of the environment ministers who participated in Buenos Aires at the U.N. Environment Forum on Latin America and the Caribbean, taken in a courtyard in the Casa Rosada, seat of the Argentine government. Credit: United Nations Environment Programme

That is despite the fact that “there is systematic destruction of wealth in the Caribbean due to the major climatic shocks,” he said.

“We still have a lot of work to do for an immediate international response, because a large share of the GDP of Caribbean nations is at risk from climate catastrophes,” he added.

Simon Stiell, minister of climate resilience, the environment, forestry, fisheries, disaster management and information of Grenada, told IPS that “We are at the front line of the battle against climate change and the irony of that is that we contribute the least to the course of global warming. Our contribution is absolutely negligible, however we are the ones who pay the price and pay the price dearly.”

Stiell pointed out that tourism in Grenada – a Caribbean island nation of 110,000 people – is its main economic activity and that beaches, its main asset, are under threat from climatic phenomena.

But that’s not the only reason why, according to Stiell, climate change is threatening the livelihoods of Caribbean islanders.

“Our ability to feed ourselves has always been highly vulnerable and today, when we look at our agricultural sector, what we see are increased flooding and increased droughts, making things extremely difficult,” he added.

Not only the island states of the Caribbean are strongly affected by climate change, but also Central American nations with Caribbean coastlines as well.

According to Alfonso Alonzo, Guatemala’s environment and natural resources minister, his country is one of the most vulnerable in the world.

Among the world’s most vulnerable nations are Haiti, Guyana, Honduras, Nicaragua, Belize, Venezuela and Cuba, in that order, of those with Caribbean coasts, according to figures from a global study released in September.

Alonzo complained that international aid funds do not arrive in the amounts and as quickly as they should.

“They ask us to pay attention to the new study by the Intergovernmental Panel on Climate Change (IPCC), which argues that changes to curb global warming are urgently needed, but funds are urgently needed as well,” Alonzo told IPS.

The Guatemalan minister called for a decentralisation of the agencies that handle international aid funds.

He specifically questioned why the Green Climate Fund (GCF), created under the U.N. Framework Convention on Climate Change to assist developing countries in their adaptation and mitigation plans, has its only headquarters in South Korea.

“Our projects go to South Korea (to the GCF headquarters) and take two or three years to be approved. Regional offices of the Fund need to be opened, with decision-making power. The funds have to arrive quickly, because in Latin America and the Caribbean there are changes of government and the processes are cut off,” he argued.

Alonzo said the GCF is run by people “who aren’t even familiar with our region.”