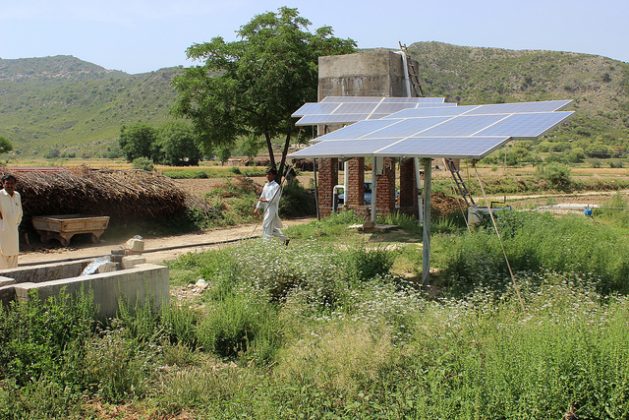 UNITED NATIONS, Oct 8 2018 (IPS) - In May the United Nations Secretary General Antonio Guterres announced next year’s summit on climate. This assertion has given the Global Green Growth Institute international momentum, which was reflected in the events of the 73rd session of the United Nations General Assembly (UNGA) in New York City.

During the UNGA week the Global Green Growth Institute (GGGI), an international organisation based in Seoul, South Korea, led the conversation on green growth. Frank Rijsberman, the institute’s director general, highlighted that green growth is not a matter of the future but of the present. Green growth, defined as sustainable economic growth, is essential due to the damage caused by climate change and increased pollution.

While at UNGA, GGGI participated in the Sustainable Development Impact Summit, organised by the World Economic Forum, the P4G (Partnering for Green Growth and the Global Goals 2030), and the Sustainable Investment Forum, organised by Climate Action and U.N. Environment Programme Finance Initiative.

At the event, the speakers discussed the challenges green growth encounters, the best practices in the field, and how public opinion regarding sustainable energies has shifted in the last years. Green growth, at the core of the Paris Agreement and the 2030 Sustainable Development Goals, is not at the sidelines of international policy anymore, but at the centre of the conversation.

The United Kingdom, Denmark, Norway, and even South Korea are already pursuing green growth agendas. But the shift is especially important for developing countries, which are more at risk due to climate change.

“Mainstreaming green growth is the only option for vulnerable countries,” stated Rijsberman at the event. “This is not just a challenge but also an opportunity.”

For Fekitamoeloa Katoa ‘Utoikamanu, High Representative for U.N.-OHRLLS, promoting sustainable growth in developing countries is a priority. She told IPS: “Leveraging the potential for green growth in vulnerable countries is critically important.”

Often times environmental damages are linked with other issues, explained Katoa. “Poverty and its alleviation are intricately linked to the environment and climate change is a threat which demands our immediate attention,” she commented.

Despite its importance, getting governments to change to sustainable growth is not always easy.

According to Rijsberman, “policy obstacles, government, and finance” need to be taken into account. But the biggest challenge remains shifting investment patterns. The breakthrough for renewable energies comes with lower prices, he says.

“It is hard to compete fossil fuels if they are cheap,” said Rijsberman at the event. When fossil fuels become more expensive than renewable energies, it is easier to find investment for green growth projects. That, claimed Rijsberman, is already happening.

Now, the challenge for GGGI and national governments is to find investors to fund green growth projects —for example, increasing solar panels.

“Our goal for 2020 is to raise more than two and a half billion dollars in green and climate finance,” said Rijsberman.

Katoa, from U.N.-OHRLLS, stated: “It is clear that global financing needs to be stepped up considerably and directed towards investments that contribute to green growth and building resilience. This includes both traditional as well as new channels.”

The difficulties of changing public opinion have been overcome in the most part. Natural disasters, heat waves, and pollution have made public opinion aware that climate change is real, and solutions are needed.

During the event at the U.N. headquarters, Mauro Petriccione, director general for Climate Action at the European Union, pointed out how European opinion has shifted.

“It has taken the last two summers to make Europeans aware of the effects of climate change,” he said. Now, he added, “Europe is taking strong legislative action to this respect.”

Finally, the loss of jobs in the fossil fuel industry needs formal solutions. Rijsberman suggested formal retraining, because the skills needed in renewable energies are different from those required in the coal and oil industries.

Despite these difficulties, there are many cases of success in this transition. Rwanda and Ethiopia have already changed to sustainable growth. They are, as Rijsberman calls them, “champions of green growth.”

For countries like Ethiopia the change to sustainable energies is crucial. Climate disruptions have an immediate effect on their economy, which depends mainly on agriculture. Thus, the government prioritises climate resilience to secure its citizens’ livelihood.

Selamawit Desta, the Ethiopian representative at the event, shared with IPS how they succeeded in transitioning to green growth. “In 2008, we stopped subsidising fossil fuels. It was hard, but we gave an option. Food or fossil fuels,” she explained. And since then, Ethiopia barely has emissions.

Other countries with vast natural resources, also affected by climate change, need to take advantage of their ability to develop renewable energies.

She continued: “These nations also typically have a large untapped potential for renewable energy, which can help to bring sustainable energy access to underserved and remote rural communities.”

The institute, founded in 2010, relies upon 36 countries, both members and partners of GGGI. They work closely with them to diversify their economies, promote solar energies, and connect financial investors with specific green growth projects.

Inevitably, their work depends on the will of the national governments. But more and more states are willing to collaborate with the Institute. During the event “Leveraging Green Growth Potential” both the Rwandan minister of environment, Vincent Biruta, and the representative for the Pacific Islands expressed their gratitude to GGGI.

GGGI also counts with a large institutional network, working with organisations such as the U.N., the World Bank, and the OECD, to promote green growth knowledge.

She added: “We look forward to ongoing cooperation with GGGI particularly in addressing climate change challenges and improving access to sustainable energy in vulnerable countries.”