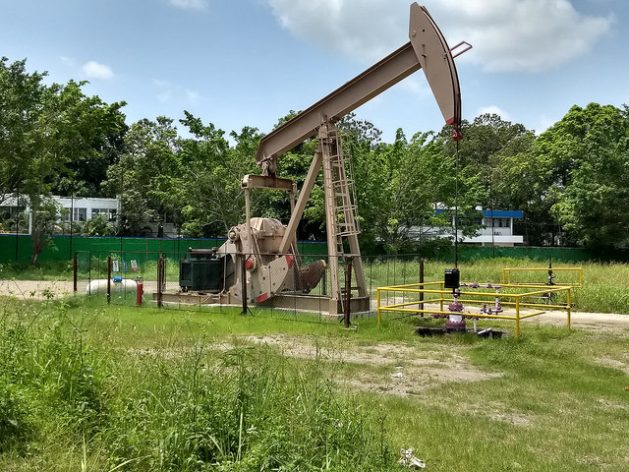 The new trade agreement between Canada, the United States and Mexico includes the energy sector, which was not in the previous treaty, and while it recognises Mexico's ownership of fossil fuels, it strengthens favourable conditions for foreign companies. The picture shows an oil well in the city of Poza Rica, in the southeastern Mexican state of Veracruz. Credit: Emilio Godoy/IPS

MEXICO CITY, Oct 9 2018 (IPS) - Following the fanfare of the countries’ leaders and the relief of the export and investment sectors, experts are analysing the renewed trilateral agreement with Canada and the United States, where Mexico made concessions in sectors such as e-commerce, biotechnology, automotive and agriculture.

Karen Hansen-Kuhn, director of Trade and Global Governance at the U.S.-based Institute for Agriculture and Trade Policy (IATP), said that one of the sectors that kept its advantages is the agro-export industry, one of the beneficiaries of the old North American Free Trade Agreement (NAFTA), in force since 1994.

“Mexico will have fewer barriers to products. This will not benefit family farmers. The new agreement will undermine many initiatives that Andrés Manuel Obrador (Mexico’s president-elect) proposes and it will make it more difficult to rebuild the agricultural sector,” she told IPS.

On the night of Sep. 30, the three partners announced the new U.S.-Mexico-Canada Agreement (USMCA) to give continuity to NAFTA,but under a different name, which was one of the demands of President Donald Trump, who demanded renegotiation of the treaty when he arrived at the White House in January 2017.

The Mexican and U.S. governments had reached an agreement a month earlier, which Canada joined when the deadline for reaching a new agreement, also set by Trump on Oct. 1, was hours away.

In the negotiations with Canada, the United States forced its partner to accept the opening of the dairy market, which under NAFTA only allowed quotas for milk, cheese and other products. In addition, U.S. poultry, beef and pork producers will enjoy greater access to that market, in exchange for quotas on Canadian peanuts, their byproducts and sugar.

The general perception is that Trump imposed his will on the configuration of the USMCA, as he promised in his election campaign. He has immediately started to use the result as propaganda for the November legislative elections in his country.

Ignacio Martínez, an academic at the Centre for International Relations of the Faculty of Political and Social Sciences of the National Autonomous University of Mexico, says the new agreement has pros and cons.

In the medium term, Mexico gains “in terms of macroeconomics, economic stability. It provides certainty to investors, because it maintains tariff preferences and this will cause a greater flow of investment,” he said in an interview with IPS.

The expert also considered the provisions on anti-corruption, competition and transparency to be positive, because they will prompt the incoming government to pass anti-corruption laws.

During the campaign, Mexico’s president-elect, López Obrador, promised support for small farmers and guaranteed prices for maize and beans. In addition, he talked about banning genetically modified maize, a matter that is being disputed in the courts in Mexico.

Since July, a delegate of López Obrador participated in the negotiations, and the future president gave his approval to the agreement, which paves the way for a rapprochement with the administration of Trump, who is wary of his upcoming inauguration as president of Mexico on Dec. 1. 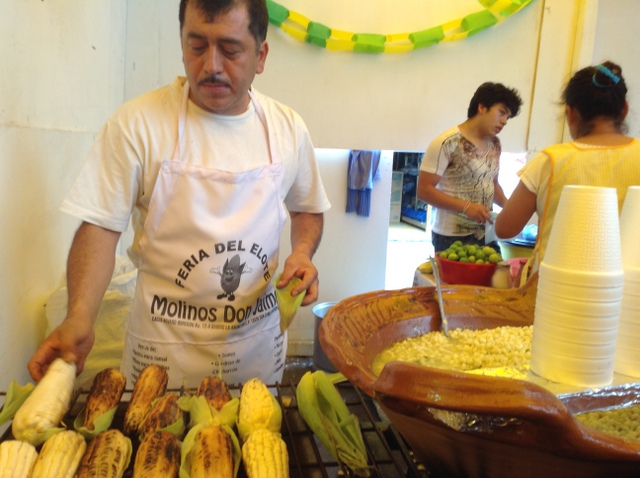 Mexico’s maize, the country’s main crop and staple food, was hit hard by the North American Free Trade Agreement and will continue to feel the impact of the new U.S.-Mexico-Canada Agreement, which will replace it. Credit: Emilio Godoy/IPS

But their promises may collide with the USMCA, which regulates the granting of agricultural subsidies and the imposition of measures against biotechnology.

Automotive manufacturing, maquila plants – which import materials and equipment duty-free for assembly or manufacturing for re-export – agro-export and financial services are among the sectors that benefit from the liberalisation of trade.

Among the biggest losers, which were already hit hard by NAFTA, are the food industry in general, and small-scale agriculture in particular, including traditional maize and bean crops, part of Mexico’s basic diet, Martínez and other academics and activists from the affected sectors place the food sector

As a result, NAFTA drove Mexico’s commercial dependence on its neighbor to the north, which imports more than 80 percent of Mexico’s total exports.

In the automotive sector, vehicles assembled in the countries in the block will contain 75 percent of parts manufactured in any of the partner countries by 2020, to avoid tariffs.

The USMCA puts that content at 62.5 percent. In addition, between 40 and 45 percent of the parts in each vehicle must be manufactured by workers earning at least 16 dollars an hour, to level the wage conditions in the United States and Mexico.

In this Latin American nation, salaries range between 3.41 and 7.34 dollars per hour in the automotive industry, according to data from the non-governmental Centre for Automotive Research in the United States.

Mexico also agreed to recognise collective bargaining rights in labour contracts. In fact, in September the Mexican Senate ratified the International Labour Organisation’s (ILO) Convention 98 on the Right to Organise and Collective Bargaining.

The energy chapter of the USMCA, which does not exist in NAFTA, legitimises the Mexican reform that opened the industry to private capital in 2014.

The U.S. and Mexico agreed to maintain the investor-State dispute settlement scheme through arbitration tribunals for oil and gas, power generation, telecommunications and infrastructure, in which foreign companies invest billions of dollars.

In this sense, the new agreement preserves the mechanisms for disputes between States and for the application of unfair trade policies.

The three partners also decided on the adoption of a 10-year exclusivity for the protection of biological data on tests of pharmaceutical drugs obtained from living or genetic material.

Its statutes seek to protect the rights of the breeder of each new plant variety that meets the criteria set out in that agreement, which provides double protection for the breeder of the variety and the owner of the original plant patent.

The 1991 version, in force since 1998, protects the property rights of Canada, the United States and the European Union and provides for the recognition of the rights to new genetic traits, in open concession to transgenics.

Greater protection of biological data hinders the development of biosimilar or generic drugs against serious or chronic diseases.

The USMCA, which must be ratified without changes or rejected by the legistlatures of the three countries in 2019, outlines criminal penalties for online film piracy and prohibits customs duties and other discriminatory measures from being applied to digital products distributed electronically (e-books, music, software, video games, etc).

The new agreement will be signed by the three presidents of the partner countries on Nov. 29, at the end of the six-year term of conservative Mexican President Enrique Peña Nieto, before handing over to López Obrador, and the agreement will replace NAFTA in 2020.

Unlike NAFTA, the new agreement includes environmental and labour issues in the main text. But the first is limited to preventing and reducing marine litter; promoting sustainable forest management; and defining as a crime transnational trafficking in protected wildlife, without any mention of climate change.

“I hope there will be a broad debate in Mexico, especially on agriculture and the energy transition. Right now, it’s difficult to predict how it will be affected” by the legislative election in the United States and with the change of government in Mexico, she said.

The USMCA includes, as required by Washington, an anti-China clause, establishing that one of the partners cannot negotiate a trade agreement with a country that is not a “market economy” – that is, not a capitalist one. If this were to happen, the agreement allows any of the parties to withdraw from the agreement.

The negotiators agreed that the USMCA is to last 16 years, unless the partners decide to extend it. To this end, they will meet every six years.

“I wish it could take a critical stance to make the executive branch see that alternative mechanisms are needed to shore up the domestic market. That will be seen in the United States, where the Democrats are going to fight for contents that weren`t included,” he said.