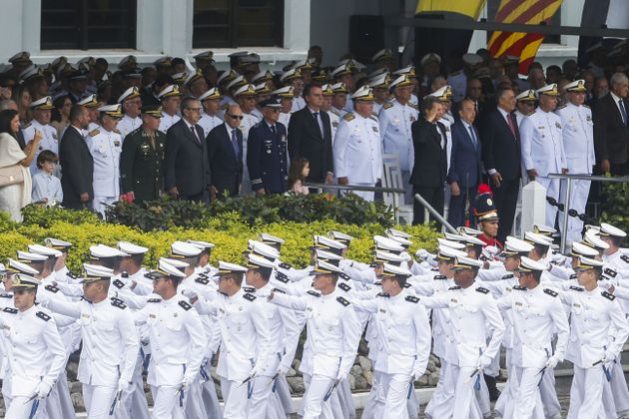 Jair Bolsonaro and his vice president-elect are retired military officers, and the president-elect will appoint seven other officers to the ministerial cabinet. Since he was elected president of Brazil, the far-right politician has shown his predilection for participating in military ceremonies, such as the graduation of Navy officers in Rio de Janeiro seen in this photo. Credit: Tânia Rêgo/Agência Brasil-Fotos Públicas

RIO DE JANEIRO, Dec 14 2018 (IPS) - The government that will take office on Jan. 1 in Brazil, presided over by Jair Bolsonaro, will put to the test the extreme right in power, with beliefs that sound anachronistic and a management based on a direct connection with the public.

“People’s power no longer needs intermediation, new technologies allow a new direct relationship between voters and their representatives,” Bolsonaro said when he received the document officially naming him president-elect by the Superior Electoral Tribunal on Dec. 10 in Brasilia.

It is no secret what role was played by the social networks, especially WhatsApp, in Brazil’s October elections, which led to the election of a lawmaker with an obscure 27-year career in Congress.

"Democracy is not in crisis because of WhatsApp, but because of the lack of a social pact, because trade unions and political parties are no longer representative…He (president-elect Jair Bolsonaro) knew how to use the social networks to present himself as the solution (and) they may or may not help him once he's in the government." -- Giuseppe Cocco

But now he has to govern. Based on his speeches and recent experience, Bolsonaro, 63, will continue to turn to the social networks as president and successful disciple of U.S. President Donald Trump.

“But they are two very different realities, the elections and governing. The president-elect has shown that he is still campaigning, but now it’s not about promises, it’s about presenting results,” said Fernando Lattmann-Weltman, professor of political science at the Rio de Janeiro State University (UERJ).

“Without satisfactory results, the greatest risk is that the government will become unviable, if its relations with the other branches of power and with institutions and organised groups deteriorate,” and the strong expectations of change created in the elections are frustrated, he said.

Bolsonaro also made the usual promise that he would govern for all, as “president of Brazil’s 210 million people.” But experts agree that direct communication with voters is biased and tends to fuel antagonism that lingers after the elections, as in the case of the United States of Donald Trump.

Social networks expand the possibilities of dialogue between people, as interactive media accessible to growing parts of the population. But they are not public like the press, radio and open television. They are limited to family, friends or circles of common interest.

As a political tool, they often give rise to groups of shared opinions and beliefs, or digital sects. They do not promote debate, argumentation and confrontation of ideas, also because in general they are used for short messages, slogans and “fake news”.

In this sense, they aggravate polarisation and antagonism. A government based on these connections would tend to accentuate conflicts, crises and threats to democracy, analysts argue.

“Democracy is not in crisis because of WhatsApp, but because of the lack of a social pact, because trade unions and political parties are no longer representative,” said Giuseppe Cocco, a professor at the School of Communication at the Federal University of Rio de Janeiro.

Social networks do have a “club effect,” but today they are “an indisputable aspect of our lives” in their various dimensions, whether it be material production, communication, services or even politics, he told IPS.

In Cocco’s view, “its use in the election campaign does not explain Bolsonaro’s triumph,” which he said was due to the desire of the majority of Brazilian voters for a change against corruption, a political system that has lost credibility, the economic crisis and growing crime and insecurity.

“He knew how to use the social networks to present himself as the solution,” he said, adding that “they may or may not help him once he’s in the government,” depending on how he uses them. 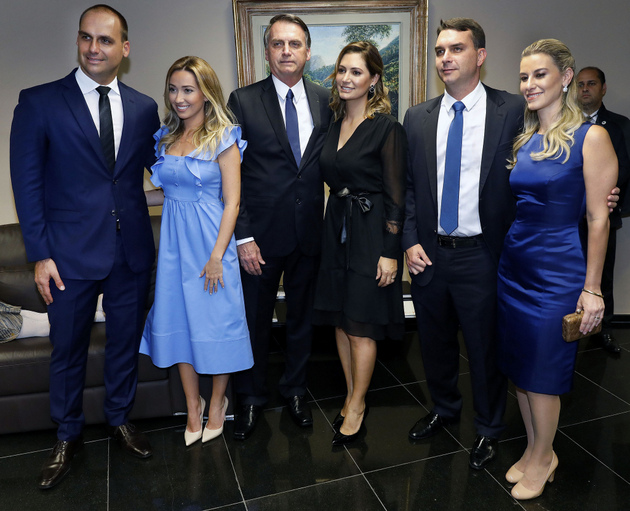 Jair Bolsonaro (C-L) receives the document officially naming him president-elect of Brazil, next to his wife, two of his five children – one of whom is a member of the lower house and the other a senator – and their wives. A staunch defender of the traditional family, his will have a strong presence in his government, which has already begun to spark conflicts and scandals involving some of his offspring. Credit: Roberto Jayme/Ascom/TSE-Fotos Públicas

But there are a number of researchers around the world who say the social networks have had a negative effect on democracy, due to their use in the wide dissemination of “fake news”.

They also refer to foreign interference in elections, such as the suspected Russian meddling in the 2016 U.S. presidential elections, and to pressure exerted by directly connected voters as if they were “the voice of the people.”

At the same time, Whatsapp has become the most widely utilised instrument when it comes to organising major social mobilisations, such as the truck driver strike that paralysed Brazil in May and the “yellow vest” uprising in France, which began on Nov. 17 as protests against fuel price hikes and ballooned into a much broader movement.

In the past that role was played by the landline telephone, now almost completely replaced by the cell phone. Social networks like Twitter and Facebook became decisive in elections like Trump’s in 2016 and mobilisations such as the “Arab Spring” in North Africa, said Cocco, an Italian who has lived in Brazil since 1995.

But it is not only a technical evolution; WhatsApp is a “closed network” that does not allow the provenance of the messages to be identified, or whoever is responsible when messages that could be criminal are disseminated, in contrast with other media.

This warning comes from Alessandra Aldé, postgraduate professor of Communication at UERJ and coordinator of a research group on this application, who repeated it in interviews given to local media after the October elections.

In addition, businessmen allegedly used their own money to spread false accusations on WhatsApp against the candidate of the leftist Workers’ Party, Fernando Haddad, in violation of the country’s election laws, reported the daily Folha de São Paulo on Oct. 18, 10 days before the presidential runoff election.

Many analysts point to similarities between Trump and Bolsonaro because of their electoral success driven by social networks and their extreme right-wing policies.

But the Brazilian leader was elected with “a more fragile support base,” without the backing of a party like Trump’s Republican Party, or of experienced lawmakers, Lattman-Weltman told IPS.

Bolsonaro comes from a military background. In 1988, the retired army captain became a city councillor in Rio de Janeiro. Two years later he was elected to the lower house of Congress, and was eventually re-elected six times. He never held an executive branch position and was not a leader of any political party.

The party he joined in May, the Liberal Social Party (PSL), only won a single seat in the lower house of Congress in 2014. But in October it garnered 52 of the 513 seats, and gained a foothold in the Senate for the first time, taking four seats – five percent of the total. A large part of its success was due to the sudden popularity of Bolsonaro.

Another risk, with perhaps more serious and immediate consequences, is the beliefs of the two central power groups in the next government, one deeply religious and the other military. “God above all” was the slogan of Bolsonaro’s campaign and of the government that begins its four-year term on Jan. 1.

Seven armed forces officers will form part of the 22-member ministerial cabinet. In addition there is the president and his vice president, retired General Hamilton Mourão, making up the most militarised government in the history of Brazil’s democracy.

Bolsonaro has rejected, for example, the holding of the world climate conference in Brazil in 2019, and threatens to pulls out of the 2015 Paris Agreement on climate change, saying it jeopardises Brazil’s sovereignty over 136 million hectares of Amazon rainforest, because of a plan to turn it into an ecological corridor, the Triple A.

This type of fear is widespread among the Brazilian military, who also suspect that land reserved for indigenous people may become part of the international domain or independent, which is why they resist the demarcation of indigenous reserves.

But actually the Andes-Amazon-Atlantic (Triple A) ecological corridor was proposed by a Colombian environmental organisation, Gaia Amazonas, and was neither approved by nor is part of the climate talks.