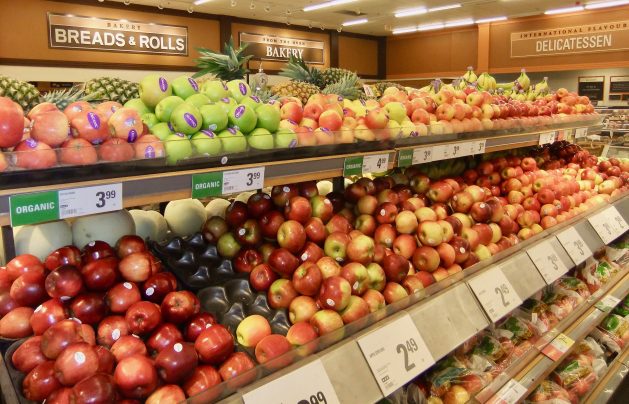 Even with a metre of snow outside in Ottawa, Canada, a wide variety of imported apples and other fruits are available in Canadian food markets. Credit: Stephen Leahy/IPS

ONTARIO, Canada, Feb 8 2019 (IPS) - Canada introduced a new healthy eating food guide January 2019 and, for the first time, the meat, dairy and processed food and beverage industries were not involved. Based on the recommendations of health and nutrition experts, the guide places a new emphasis on eating plants, drinking water and cooking at home.

“Healthy eating is an important part of maintaining a healthy lifestyle and helps prevent chronic diseases like type 2 diabetes, heart disease, and some cancers,” said Theresa Tam, Chief Public Health Officer of Canada, in a statement.

The guide goes beyond advising Canadians what foods to eat but how to eat by recommending cooking at home, eating meals together and avoiding fast food said Jennifer Reynolds of Food Secure Canada, an alliance of organisations and individuals working together to advance food security. 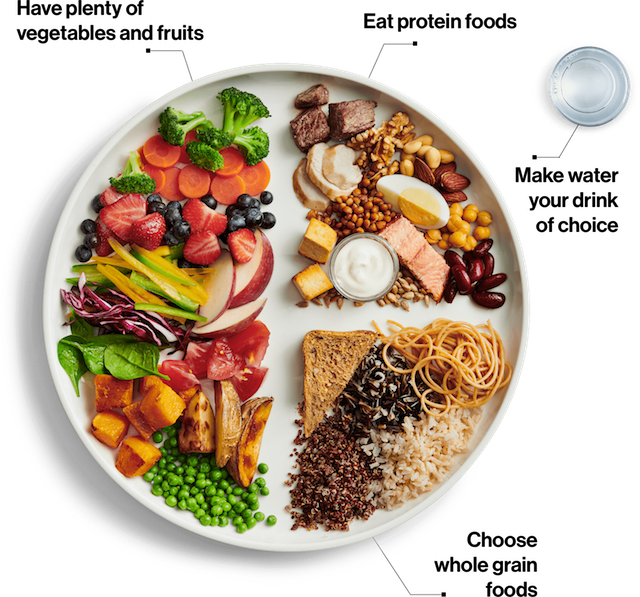 Canadians spent 19 billion dollars on fast food in 2017, an average of 2,200 dollars per year for a family of four.

Unicef ranked Canada 37th out of 41 rich countries when it comes to providing healthy food for kids. The long road to developing a new food guide represents a whole new direction for food in Canada, said Reynolds in an interview. Despite a powerful food industry lobby, new legislation is expected this year to limit marketing of unhealthy food and drinks to children.

Not only is shifting to more plant-based diets good for both health and the planet, it is a golden opportunity to re-direct Canada’s export-focused, commodity agricultural system to sustainable agriculture and support rural economies while addressing food insecurity, Reynolds said.

Despite living in a wealthy country, more than one in 10 Canadians cannot afford or have access to sufficient nutritious food to maintain health researchers at the University of Toronto report.

They recommend a national food policy that brings all sectors of government together to address this long-standing issue. Such a policy is sorely needed to not only address hunger and under-nutrition but also the challenges of climate change and the decline in rural economies, said Reynolds.

A national food policy could also address the shocking amount of waste in Canada’s food system where nearly 60 percent of all food produced is wasted according to a new report The Avoidable Crisis of Food Waste.

This is the first such analysis of any countries’ food production system said Martin Gooch, CEO of  Value Chain Management International (VCMI), a company that helps industries’ lower costs and improve the efficiency of their supply chains.

“I was astonished by the amount of waste in this industry,” Gooch told IPS.

The research is a “world first” because it measures weight using “a standardised system across the whole food value chain,” and includes all food types from both land and water. It also includes primary data from across the supply chain and consulted more than 700 food industry experts.

The value of all food that is lost or wasted in Canada is a staggering 49 billion dollars, said Lori Nikkel of Second Harvest, an agency that collects surplus food and gives it away to those in need. The VCMI study found that a third of Canada’s wasted food could be “rescued” and sent to communities in need.

Waste happens at all stages of food production including produce left to rot in the fields due to labour shortages, low prices or cancelled orders. Another major issue is the food industry’s focus on producing huge volumes of food as cheaply as possible over quality said Gooch. When a company in the orchard industry switched its emphasis to quality, it resulted in reduced costs, doubled profits while total volume produced was the same or less.

The lion’s share of food waste is during food production and processing the study found. Only 14 percent of food waste is at the household level. Best-before dates are the other major cause of food waste by both consumers and retailers. Product dating practices have nothing to do with food safety. Companies can use any date they wish. There are no standards or regulations, nor were best-before dates found on most products just 10 years ago said Gooch.

Given Gooch’s knowledge of Canada’s food waste he was quite surprised to see the Food Sustainability Index rank Canada among the best in the world in preventing food waste with a score of 97.80 out of 100. “That’s incorrect, we found an astonishing amount of waste in Canada’s food system,” he said.

The Index was drawn up by the Italian foundation Barilla Center for Food and Nutrition and the Intelligence Unit of the British magazine The Economist. The index ranked 67 countries based on three categories: food and water loss and waste, sustainable agriculture and nutritional challenges. Canada ranked third overall, much to the surprise of everyone interviewed for this article.

When IPS questioned the Barilla Center about food waste it said Canada ranked poorly, in fact 65th out of 67 counties with 80 kilograms (kg) of food waste per capita per year based their estimates. However, since Canada has a wide range of policies to address food waste it received a far higher final ranking on the Index.

However, the VCMI study found that Canada’s actual per capita food waste was closer to 1,000 kg per year, per person not the estimated 80 kg.

The third place overall ranking the Index is a result of Canada having strong policies. “While Canada does not perform particularly well in most cases on outcome metrics, the country does have strong policies to make changes, especially when compared to the United States,” Valentina Gasbarri of the Barilla Center told IPS in an email.

“We are open to discussions around what improvements could be made [to the Index],” Gasbarri said.

Perhaps the index was weighted too much towards policy and intentions mused Roberts. “It certainly does not represent on the ground reality in Canada.”