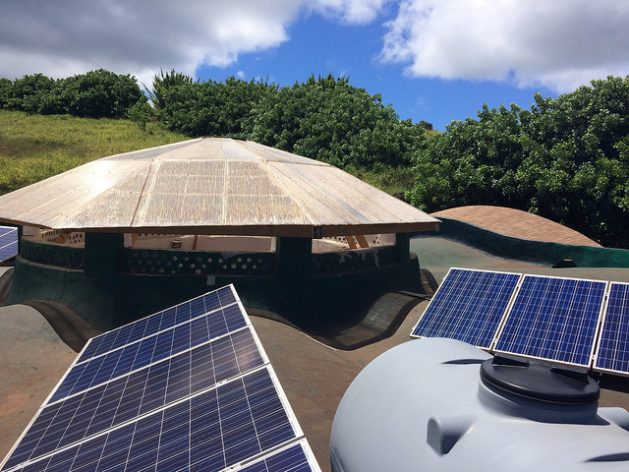 The roof of the original headquarters of the Toki Foundation on Easter Island, or Rapa Nui, located 3,800 kilometers from the Chilean coast, is also used to collect rainwater, which runs into eight large storage ponds, and to generate electricity by means of 18 solar panels. Credit: Orlando Milesi/IPS

HANGA ROA, Chile, Feb 22 2019 (IPS) - A school in the capital of Easter Island (Rapa Nui, in the local indigenous tongue) gives an example of clean management with the use of solar energy, rainwater recovery and an organic vegetable garden, as well as rooms and spaces built with waste materials.

Rapa Nui is a Chilean territory in the Polynesian triangle of Oceania: Hawaii to the north, New Zealand to the south, and Maori and Rapa Nui to the east. The island has about 8,000 permanent residents, most of them families from the Rapa Nui indigenous people. In addition, some 120,000 tourists visit the island every year.

With an area of 163.6 square kilometers and a triangle-like shape, the island is nicknamed the “navel of the world” in the Rapa Nui language. It is 3,800 kilometers from Chile.

On Easter Island, formally classified as a “special Chilean territory”, the Toki Foundation emerged seven years ago, created by 11 young people, including award-winning local pianist Mahani Teave, 35, the daughter of an American woman and a local artist.

Thanks to the Foundation’s school, located three kilometres from Hanga Roa, the island’s capital and only town, hundreds of Rapa Nui children have taken music workshops.

Some study classical music (violin, piano, cello or trumpet) and others traditional music, playing the popular ukulele. Children from the age of six attend the workshops in the afternoon, after school.

Michael Reynolds, an American nicknamed the garbage architect, designed the 850-square-meter Toki school house with eight classrooms plus a small auditorium and a roofed terrace.

“They built the main structure using garbage,” Carla León, 30, coordinator of the Foundation’s school, told IPS. Last year it served 120 students, who will return to the classrooms in March after the southern hemisphere summer vacation.

For the last three years, the house has had 18 solar panels on its roof to take advantage of the island’s strong sunlight and convert it into electric power. The panels generate 10 kVA and supply all of the electricity required by the school.

But Enrique Icka, 34, director of the Foundation and Mahani’s partner, told IPS that they want to extend the experience to a nearby site where the cultural organisation will operate, thus creating a microgrid. 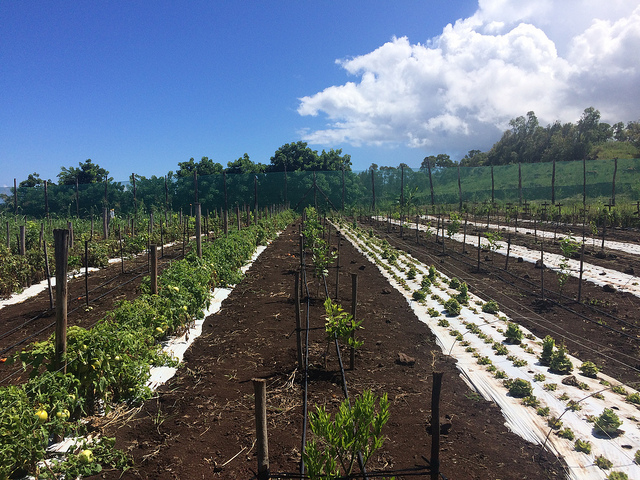 In its organic garden, the Toki Foundation in Chile’s Rapa Nui or Easter Island is researching the most efficient way to recover ancestral crops of the Rapa Nui indigenous people, with minimal labour, taking best advantage of the soil and rescuing the stone garden technique that prevents erosion and maintains moisture. Credit: Orlando Milesi/IPS

The generation of solar power is important on this island, where the electricity supply depends on the 300,000 liters of oil that tankers bring each month from the continent to meet the consumption needs of the local population: 2.5 megawatts (MW).

The generation and distribution of electricity is the responsibility of the company Sasipa, which in November 2018 inaugurated the first solar power plant, Tama Te Ra (which means “first rays of the sun”, in Rapa Nui), which only generates power in the daytime, using 400 photovoltaic panels to produce 105 kilowatts.

It covers between two and eight percent of Rapa Nui’s energy needs.

The Toki Foundation is also a pioneer in rainwater recovery. The curvilinear rooftop collects rainwater, which runs into eight ponds in the shape of stone towers, each of which has a capacity of 5,000 litres.

“Since four governments ago (for 16 years) I have been calling for metering wells to know how much water we have and how dangerous is the way we are getting it. That information is important today and the investment is not being made,” he said.

“In the meantime, we started our own awareness-raising theme by working with fairy tales so that children understand the value of water, take care of it and tell their parents not to water when it rains, for example,” Paoa said.

Drinking water in Rapa Nui is also provided by Sasipa which has six wells, from which water is channelled to six ponds to treat it and make it potable.

Meanwhile, the Toki Foundation’s rainwater harvesting system began to be replicated in some houses on the island, and the model is expected to continue to expand.

That is important for the island because in the future “we are going to have a great shortage of water resources,” Tiare Aguilera Hey, 37, an attorney who is an expert in urban and territorial planning, told IPS.

Carolina Campos, 42, the executive director of the Foundation, highlighted the promotion of an agro-ecological garden with drip irrigation using well water “that seeks to rescue traditional crops like taro root (Colocasia esculenta).

The garden is on part of Toki’s 2.5-hectare arable land, and will require about 700,000 litres of water for irrigation.

The initiative received a positive assessment from the government’s Foundation for Agrarian Innovation, which supported it with 90,000 dollars over two years.

Diego Valenzuela, 29, who has been working with the Foundation’s crops for six months, proudly showed IPS their tomatoes, lettuce, lemons, oranges, custard apples and 80 banana trees, which will soon be producing fruit ready to harvest.

They are also using manavai or stone gardens, which facilitate agriculture because the stones protect the crops from erosion, preserve moisture, maintain the temperature and provide the plants with minerals.

The Rapa Nui used these gardens to make it through tough times, Valenzuela pointed out.

In the future, the gardens will be used to help recover other ancestral species, such as the Toromiro (Sophora toromiro), an endemic tree of Rapa Nui that today is only found in the nurseries of the state-run National Forestry Corporation.

Four youngsters from the Rapa Nui Educational Village High School were invited to participate in the last Conference of the Parties on climate change, in Poland, to describe how the gardens work.

“We have several focuses. The first was music and art school, to give children opportunities that didn’t exist before,” Teave told IPS.

“If they are practicing music, coming to classes and taking part in group activities after school, they’re not on the streets using drugs,” she said. “Here they learn about respect: if you can play next to a woman cellist, listen to her and be on an equal footing, you probably won’t hit her when you’re married.”

According to Teave, Toki seeks “to make a contribution here on the island which, because it is so visible worldwide, can have an impact elsewhere, inspire other people and serve as a model.”

Icka told IPS that all these initiatives in Toki “are born out of the Rapa Nui worldview and the motivation of young people on the island.”

He also highlighted “the participation of more than 1,000 volunteers in all these years.”

Teave stresses the need to rescue the roots of the Rapa Nui people, including the language, “which is the root of this culture.”

“We need to do everything we can to recover that ancestral worldview that has to do with respect and a lot of knowledge that was being lost and that some people here are also trying to rescue,” she said.

The pianist also believes that recovering species that are not currently being planted, by using more efficient systems, can result in “producing here, on the island, what we ourselves eat.”