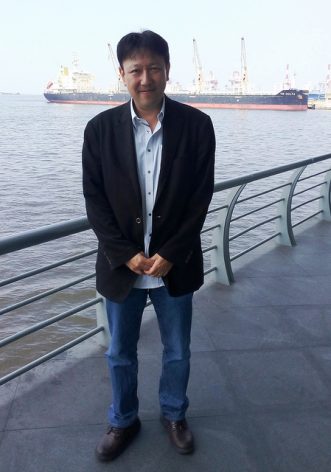 Dr. Takahiro Nanri, Executive Director of the Sasakawa Memorial Health Foundation, explained the need for leprosy CSOs to develop income-generating plans to cover gaps in sustainable funding. The Sasakawa Foundation is a major supporter of organisations for people affected by leprosy throughout Asia. Credit: Ben Kritz/IPS

MANILA, Mar 3 2019 (IPS) - Strengthening the participation of persons affected by leprosy, or SPP, has proven to be an effective strategy in reaching out to often isolated sufferers in local communities throughout Asia. A significant challenge to civil society organisations, however, is finding enough management talent to maintain and expand the programmes.

Capacity building, providing organisational and management training to SPP participants doing the heavy lifting for leprosy advocacy groups in their work in individual countries, was highlighted as a significant priority by the participants at the Regional Assembly of Organisations of People Affected by Leprosy in Asia in Manila on Mar. 3.

The challenge is made even more difficult because many programme volunteers come from marginalised communities, or have had their own education interrupted by complications or social ostracism associated with leprosy.

Amar Bahadur Timalsina, president of International Association for the Integration, Dignity and Economic Advancement (IDEA), Nepal, told IPS that capacity-building is likely the biggest problem facing his organisation. “Many of the people working with us are completely uneducated, and some are even illiterate,” Timalsina said. Many of Nepal’s leprosy patients are found in poor communities, and face significant discrimination.

“Right now, we are focusing on building the capacity of our board members and programme managers,” Timalsina said. “Fortunately, we are able to work with the Leprosy Mission Nepal, who are able to provide us with expertise in business management, finance, and social programme management.”

The discrimination that prevents leprosy sufferers from accessing education and seeking out medical and social assistance in Nepal is perhaps a bit stronger than in some other countries, as it is still part of the law in one respect. In his presentation to conference delegates, Timalsina highlighted IDEA Nepal’s efforts to amend a constitutional prohibition of marriage between leprosy sufferers and unaffected persons, and to include information on leprosy in the country’s health education curriculum.

While the capacity-building challenge is a common priority, organisations in different countries have adopted different approaches to addressing it. For example, the focus of PerMaTa Indonesia, which means Gem in Bahasa, places heavy emphasis on emotional and social support for persons affected by leprosy. The organisation also directs much of its attention to youth. PerMaTa’s Yuliati explained that the social focus helped leprosy patients gain acceptance, which is particularly important for young people to have continued access to education. Over the long term, it will help the skills capacity of the organisation; in the short term, however, PerMaTa must still rely on some degree of outside expertise.

China’s Handa faces a similar challenge, but has actually been able to quantify its need for expertise. The organisation, which has about 3,500 members across 14 provinces and serves nearly 9,500 beneficiaries, has structured its board so that one-third of its members are private-sector professionals, Handa representative Qi Xiuli told the conference delegates. With this arrangement, overall policy objectives are generated by persons affected by leprosy who make up two-thirds of the board, while the professional board members take charge of practical implementation of the organisation’s initiatives.

Beyond the day-to-day goal of carrying out programmes and managing organisations in an efficient way, capacity-building is key to helping the various organisations secure financial sustainability.

In a group discussion, Dr. Arturo Cunanan, Director of the Philippines’ Culion Sanitarium and General Hospital and the country’s foremost leprosy advocate, pointed out the need for organisations to secure a substantial initial investment in order to be able to work on sustainability. Cunanan suggested that this might be one way organisations could address their capacity gaps.

“That initial investment may be in the form of a financial investment, but it could also be a technical or capacity investment,” Cunanan told the conference delegates.

Sasakawa Memorial Health Foundation (SMHF) Executive Director Dr. Takahiro Nanri pointed out, however, that a financial investment would inevitably be limited. “You can start off with grants from government or non-government sources, you can gather some financial resources in the form of membership fees, but these are limited,” Nanri said. “In order to be truly sustainable, the organisation has to create an income-generating programme,” and for that, the organisation would need sufficient expertise. SMHF is a sister organisation of the Nippon Foundation (TNF), one of Japan’s largest foundations. Since the early 1960s, TNF has been actively working to eradicate leprosy across the globe and this has included providing free multidrug therapy through the World Health Organisation.

Having that capacity, however, would make achieving sustainability much easier, boosting the organisation’s credibility to potential donors. “We know you probably couldn’t generate real income to sustain your organisation for quite some time,” Nanri told the delegates. “But we [Sasakawa Foundation] could justify supporting you for, say, three years, if we could see that you were able to develop a business plan that would be viable in that amount of time.” Expertise in business and management is needed to be able to develop such plans.

Fortunately, most organisations seem to be successfully balancing the goals of becoming self-reliant and accessing enough expert help in planning and carrying out financial and operational strategies. In the group discussions, however, all the conference participants agreed that greater public awareness of their work would greatly benefit their respective organisations’ goals.