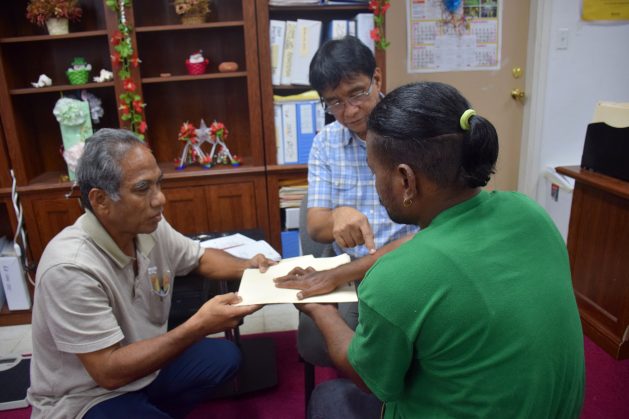 Dr Ken Jetton (left) and Dr Arturo Cunanan (centre) with a patient who has been cured of leprosy in the Majuro leprosy clinic in the capital of the Marshall Islands. The patient is now seeking further help due to post-treatment complexities. Credit: Stella Paul/IPS

MAJURO, Apr 4 2019 (IPS) - It’s a Friday morning and Dr. Ken Jetton, the only doctor who treats leprosy in Majuro, the capital of the Marshall Islands, is seeing a patient recently cured of the disease.
David, 32, has received multidrug therapy (MDT) treatment for a year already. But he is back in the doctor’s office because of a reversal reaction that has occurred.

David, who asks to be referred to only by his first name to protect his privacy, has a stiffness in his fingers. A carpenter by profession, the stiffness is causing David greater financial loss than leprosy did as he cannot hold the tools of his trade in his hand any longer.

“This is the kind of patient I typically attend to…people who have been cured of leprosy, but have physical disability due to reversal reaction to the treatment,” Jetton tells IPS.

According to authors Francisco Vega-Lopez and Sara Ritchie in ‘Manson’s Tropical Infectious Diseases’, reversal reaction is one of two distinct reactions that occur after becoming infected by the bacterium that causes Hansen’s disease, also known as leprosy.

“Reversal reactions may cause acute inflammation causing rapid loss of nerve function and require prompt initiation of treatment with oral steroids,” the authors note. They also note that this reaction can occur before, during or after treatment.

Dr. Arturo Cunanan, a world expert on Hansen’s disease, tells IPS that almost everyone shows some symptom of reversal reaction. However, the degree to which it presents varies from person to person. Those who are diagnosed and treated late have more visible signs of disability than those who were diagnosed and began treatment early.

Resource crunch limiting services
But Jetton tells IPS that he is restricted by a lack of resources and unable to reach out to other patients who, like David, need his services as a doctor.

“It is at this stage that they need me even more because they are puzzled by this [disability] and they also suffer financially. But I cannot see all of them, especially those living in the outer islands,” Jetton explains.
The physician is based in Majuro, the capital of the island nation. But Marshall Islands has 28 other atolls, where there are many active cases of leprosy reported.

But while some of these islands are a short boat ride away, the others are not so easily reachable.
“There is a car for our office use but I do not get an allowance to buy petrol for the car. Who will pay for the boat and the visits to the outer islands?” Jetton asks.

The resource crunch seems a direct result of the decreasing budgetary allocation for health in the country’s five-year funding plans. According to government records, in 2016 the Department of Health was allocated just over 25,000 dollars for its budget. However, this year the amount was 23,000 dollars.

Even for a tiny nation like the Marshall Islands, which has a population of just over 53,000, the health budget is considered small.
There are reportedly 65 healthcare centres across the various atolls. And according to Jetton there are only a handful of staff managing these.

While MDT is provided free by Novartis, through the World Health Organisation (WHO), there are no funds to staff a leprosy centre outside of Majuro. And the country records some 75 new cases of Hansen’s disease each year. 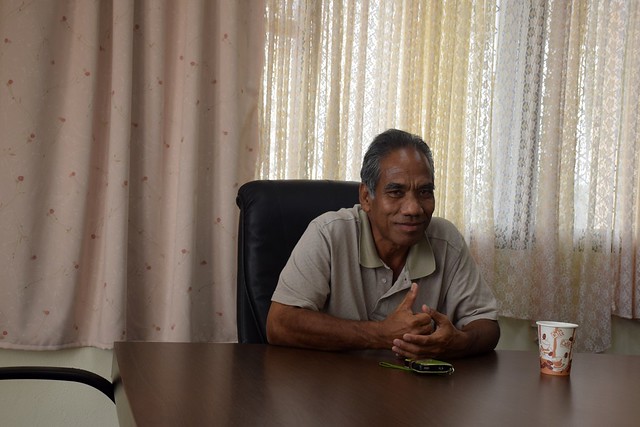 Dr. Ken Jetton, is the only doctor who treats leprosy in Majuro, the capital of the Marshall Islands. Credit: Stella Paul/IPS

New leadership, new approach
The constraints of working with an inadequate budget goes beyond fuel allowances, Jack Niedenthal, the Secretary of Health and Human Services in the Department of Health, tells IPS.
The biggest challenges of the department, says Niedenthal who took over the post early this year, are the lack of skills, capacity and infrastructure required to fight endemic diseases in the island nation.

“All the staff here are underpaid and overworked. They need skill-building training, and we need infrastructure, including new facilities to detect, diagnose and treat,” Niedenthal is heard saying during a meeting with a team from the Sasakawa Health Foundation led by its CEO, Takahiro Nanri.

There are several areas where the staff would benefit from further training. Data and record keeping is one of them, points out the secretary before making an appeal to international experts.
“Instead of inviting us abroad, visit us here and train our staff right here,” says Niedenthal. He was formerly the Secretary General of the country’s Red Cross Society and has a strong human rights approach to health.

Addressing the right audience
Niedenthal’s appeal could potentially bring some positive changes as Yohei Sasakawa, WHO Goodwill Ambassador for Leprosy Elimination, and chair of the Nippon Foundation, the parent body to the Sasakawa Health Foundation, is expected to visit Marshall Islands later this month.

Sasakawa, who is also Japan’s Ambassador for the Human Rights of People Affected by leprosy, and recent recipient of the Gandhi Peace Prize, is keen to understand the situation of combatting leprosy in the country and wants to extend his support to both those providing healthcare as well as those affected by leprosy here.

Jetton is positive that with the help of the foundation they will be able to improve their services to leprosy patients.
In the meantime he prescribes prednisolone, a drug generally used to treat reversal reactions, to David.