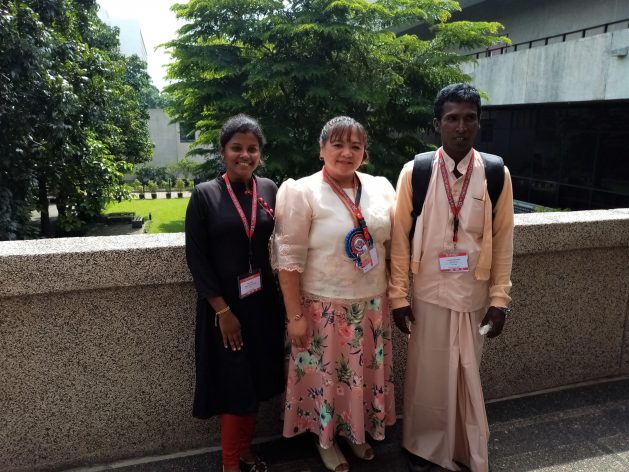 Jennifer Quimno of the Coalition of Leprosy Advocates of the Philippines (CLAP) (centre) is joined by Sri Lanka's Shagana Thiygalingam (L) and Amarasinghe Manjula (R) after Quimno delivered the recommendations presented by the Global Forum of People's Organisations on Hansen's Disease to the International Leprosy Congress in Manila on September 11. Credit: Ben Kritz/IPS

MANILA, Sep 11 2019 (IPS) - Stronger government action to fight stigma and discrimination, more government funding for health and non-health support programmes, and a larger role for people’s organisations in developing policy towards Hansen’s disease treatment and eradication are still needed for eliminating the disease.

This was some of the recommendations made by participants of the first ever Global Forum of People’s Organisations on Hansen’s Disease today, Sept. 11 during a presentation to global academics, scientists, researchers, health staff, partners and those affected by the disease at the 20th International Leprosy Congress (ILC).

Jennifer Quimno, secretary of the Coalition of Leprosy Advocates of the Philippines (CLAP), was chosen by the forum participants to represent the group.

“I really felt I was carrying everyone’s voices with me,” Quimno told IPS.

The ILC, which is currently being held in Manila, Philippines, is hosted every three years and was last held in China in 2016.

Prior to the start of the congress, Japan’s Sasakawa Health Foundation (SHF) and The Nippon Foundation (TNF), which support elimination of the disease as well as various organisations of persons affected by the disease, held a global gathering from Sept. 7 to 10. For the first time, organisations of those affected by Hansen’s disease from 23 countries across Africa, Asia, Latin America and the Caribbean met to share their know-how and experiences in eliminating Hansen’s disease.

Along with recommendations for eliminating discriminatory laws and practices, including social, psychological, and economic support in Hansen’s disease management programmes, and giving people affected by the disease a greater voice in policy formulation, the forum debated that a shift in terminology from “leprosy” to “Hansen’s disease” be promoted to help combat the historic stigma associated with the disease. No consensus was reached, however.

The recommendations called for comprehensive action and the involvement of non-health agencies and other stakeholders, because areas such as clean water and sanitation, proper housing, education, and dignified work are all, in the view of people’s organisations, critical to efforts to stamp out the disease.

The forum also called for a much greater role for people’s organisations in sustaining Hansen’s Disease treatment, rehabilitation, and services, and in promoting dignity, equality, and respect for human rights.

“Hansen’s disease is more than a disease caused by a bacterium. Poverty, institutional, social and political neglect, complacency and the structural invisibility of vulnerable populations contribute to the perpetuation of Hansen’s disease,” the final draft of the forum’s recommendations read.

Other key recommendations presented to the ILC by the forum include: More funding for research to fill scientific knowledge gaps that still exist (much remains unclear about the transmission of the disease); greater focus by national programmes on case detection, disability prevention, and rehabilitation during treatment; and more funding for “care after cure” programmes, including psychological, social, and economic rehabilitation.

To combat the stigma associated with the disease, the forum urged the widest possible dissemination and adoption by governments, NGOs, and other stakeholders of United Nations guidelines for the elimination of stigma and discrimination.

The conclusions also made a firm demand for the elimination of all existing discriminatory laws and practises globally, saying that this would further require “affirmative and reparation policies,” in order to be truly effective in promoting equality.

Hope for the future, but a few uncertainties

Participants at the global forum who attended the first day of the ILC expressed hope the recommendations would lead to positive action, but noted uncertainties remain.

“Being able to do this at the ILC is a milestone for us, to have our perspective heard,” Frank Onde, president of CLAP, told IPS. While people affected by Hansen’s disease have regularly participated in the ILC, Onde felt this was the first time recommendations were presented in an organised way.

For Indonesia’s Ermawati, a member of PerMaTa, “Attending this congress is like a dream, to come from my village to be involved in a gathering like this,” she told IPS. “It’s inspiring, and I hope it would inspire others [affected by leprosy] to join us and help others.”

Ermawati was hopeful the recommendations would lead to greater awareness and reduce stigma, particularly the discrimination against women in her country. “I hope it leads to greater acceptance, particularly of us women. In my country, the stigma is very great.” One problem faced by Indonesian women afflicted with leprosy is that they cannot marry; if laws in an area do not actually prohibit it, the culture in most places encourages men to shun these women.

Shagana Thiyagalingam, who is from Sri Lanka, felt that Quimno’s presentation was inspiring. Quimno spoke of how after both she and her father had contracted the disease, but how she still continued her studies currently works with the government health department. “Her story was so motivational,” Shagana told IPS. “It should encourage other women to come forward and feel less stigma.”

While optimistic about what lies ahead, CLAP’s Onde, and his Indonesian counterpart Paulus Manek, the president of PerMaTa, expressed a few reservations. “The barriers [between people’s organisations and government agencies] really need to be minimised,” Onde said.

Manek saw the size of the ILC gathering itself as a sort of barrier to effective action. “It’s almost too big,” Manek said. “I see people here, they are interested in one or two issues only. Maybe there should be a closer focus on fewer issues at once.”

He also suggested that new guidelines from the United Nations Human Rights Council would be useful.

“It would help us,” Manek said. “I think the media can also help to spread awareness and stopping discrimination.”

Quimno for her part was hoping to see some concrete actions taken as a result of her presentation on behalf of the global forum. “There are so many gaps to fill, so I would hope these people here would commit to studying and planning actions to take on the things we recommended. That would be progress.”