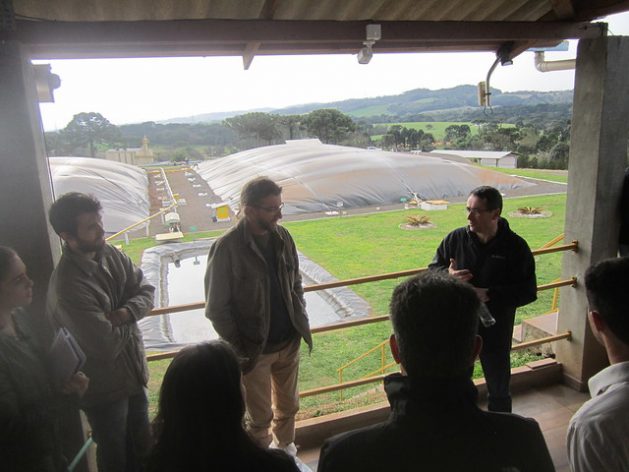 Airton Kunz, head of Research at Embrapa Pigs and Poultry, explains to visitors the Effluent Treatment System of the São Roque Pig Farm, part of which can be seen behind him, in Videira, in the southern state of Santa Catarina, Brazil's largest producer and exporter of pork. Biogas, bioelectricity and biomethane are by-products arising from the need to dispose of pork manure in an environmentally friendly manner. Credit: Mario Osava/IPS

CHAPECÓ/CONCORDIA, Brazil, Sep 23 2019 (IPS) - The state of Santa Catarina in southern Brazil is the largest national producer and exporter of pork and this year it also leads in exports of chicken, of which it is the second-biggest producer in the country.

Economic and productive success, as is often the case, brought serious environmental impacts, with manure polluting water and soil. In the beginning, pigsties were installed on the banks of rivers to dispose of waste effortlessly, the old pig farmers recall.

The expansion of the sector later led to the need for strict sanitary and environmental measures, such as manure storage areas, after the adoption of a ban on dumping it into rivers. But even when the manure is kept in covered storage areas, it continues to emit greenhouse gases.

Biogas production then emerged as an alternative, but it doesn’t completely solve the problem, said Rodrigo Nicoloso, an agronomist and researcher with the Brazilian Agricultural Research Corporation (Embrapa) Pigs and Fowl, based in Concordia, a municipality of 74,000 people that is a leader in pig farming.

Embrapa is a state entity linked to the Agriculture Ministry, made up of 43 specialised centres that have promoted agricultural development and know-how in Brazil since its foundation in 1973.

“The production of biogas requires only the carbon in the organic material,” which is why biodigestion leaves a large volume of waste known as digestate, Nicoloso told IPS, which he said is a semi-liquid by-product, rich in organic and mineral matter but difficult to manage.

This waste product, which no longer stinks, is a biofertiliser that contains the nutrients most used in agriculture: phosphorus, nitrogen and potassium. But in general pig and poultry farmers do not have enough land to absorb so much fertiliser.

The west of Santa Catarina is a mountainous area populated by small farmers and ranchers, and many farmers don’t even have land on which to use the byproduct of the biodigesters, said the researcher.

Selling it is not viable because of the cost of transporting the biofertiliser, because it is semi-liquid sludge, he said. 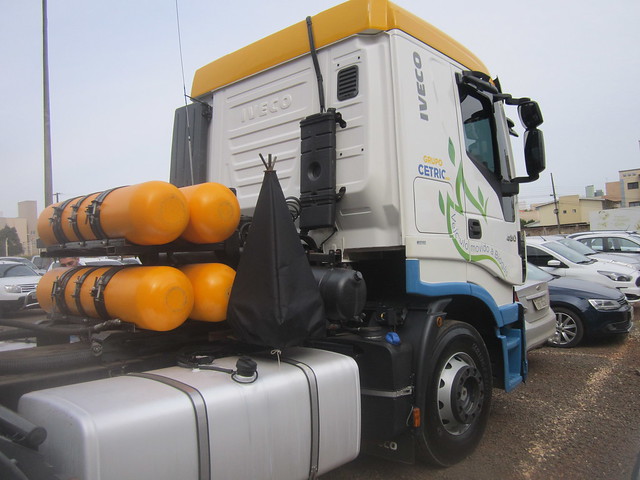 A truck, part of the fleet of vehicles that use biogas and biomethane as fuel in Chapecó, the western capital of the state of Santa Catarina, in southern Brazil, where there are a large number of pig and poultry farms and slaughterhouses. The meat industry has boosted the prosperity of the region, which will benefit further from energy by-products derived from pig and poultry farming. Credit: Mario Osava/IPS

On the large farms which are numerous in west-central Brazil, this is not a problem because in general the fertiliser derived from biodigestion is used directly on the farm’s crops.

But in Santa Catarina disposing of the waste is becoming increasingly difficult as the excess waste is growing due to the steady concentration of pig farming – and, as a result, biogas production – on larger farms.

There are currently about 5,500 pig farms in Santa Catarina, half of what there were some 15 years ago, and just 2.2 percent have biodigesters, according to the survey presented by Nicoloso. There are now 135 farms with more than 5,000 pigs, compared to 50 before.

The Master Group, with seven farms and 1,000 employees, is an example of a large pig farming company. It also has an animal feed factory, a slaughterhouse and plants to produce everything from pig embryos to the final product.

Its São Roque Farm, in Videira, a municipality of 53,000 people, has 10,000 pigs, which made possible a biogas and electricity generation project with good returns, local manager Moisés Schlosser told IPS. 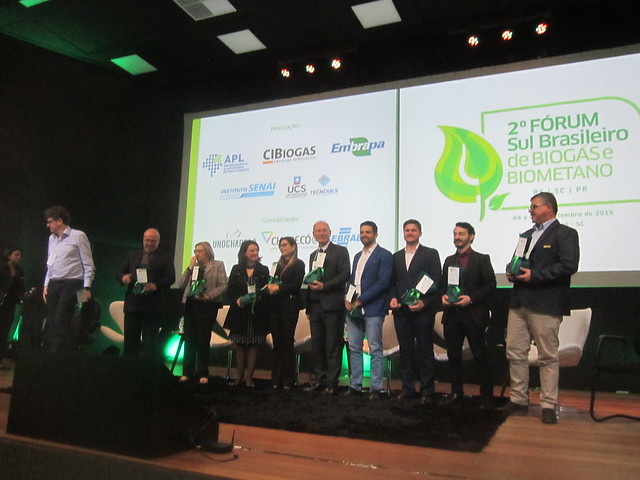 A group of speakers, researchers, businessmen and university professors who participated in the Southern Brazil Forum on Biogas and Biomethane. The challenges and potential of the sector were the themes of the three-day meeting in Chapecó, the main city in the west of Santa Catarina, where pig farming and the meat industry dominate the local economy. Credit: Mario Osava/IPS

Embrapa Pigs and Birds provides orientation for the Swine Effluent Treatment System on the São Roque Farm, which serves the farm and at the same time the development of techniques for the entire sector.

A novel experience is that it will use the bodies of pigs that die natural deaths in the biodigesters, rather than incinerate or bury them. They will be crushed and added to the solidified manure in a special biodigester, suitable for processing coarser waste. This will increase the production of biogas and reduce health risks.

“Animal health is the greatest asset of animal husbandry. But it can also be a guillotine, leading to the closure of a farm or a slaughterhouse,” Airton Kunz, head of Embrapa Pigs and Poultry research, told IPS.

Inserting biogas into the production chain, from the nursery to the slaughterhouse, energy, equipment industry, logistics and services such as technical assistance, it is necessary to avoid the mistakes made in the past.

Many producers still suffer from a bad experience with biodigestors donated by agribusiness companies interested in obtaining credits from the Clean Development Mechanism, aimed at reducing greenhouse gas emissions and created with funds from multilateral climate agencies. 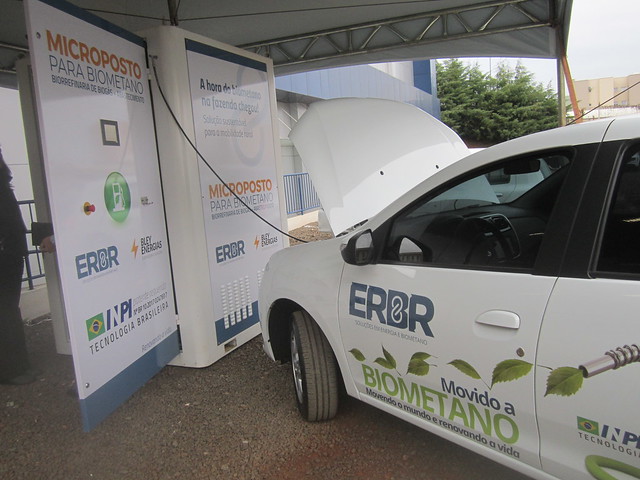 A miniplant for refining biogas to supply vehicles with biomethane, designed for pig and poultry farms and ranches, which can become autonomous in terms of fuel, producing biogas for their fleet and for other energy needs. Credit: Mario Osava/IPS

The farmers did not know how to use the equipment and could derive no benefits from it. “They saw the biogas burning, while they had to use firewood in their stoves,” recalled Paulo Oliveira, another Embrapa researcher.

Now there is a lot of know-how, “and universities, other research centres and associations participate, and there is a culture of innovation and cooperation” to guide the projects, said Kunz.

But each plant is a new challenge, it has its peculiarities and risks, he said. And there are a variety of biological inputs.

In any case, biogas is beginning to stand out as a new agricultural product, especially for the generation of electricity, in addition to the traditional use as a source of thermal energy in kitchens and in factories, in the west of Santa Catarina, where pig farming has been concentrated.

Between 2015 and 2018, the number of biogas plants in Brazil climbed from 127 to 276, almost half of which are in southern Brazil. Production rose 130 percent, from 1.3 million cubic metres per day to 3.1 million cubic metres, destined for electric, thermal or mechanical energy generation.

The potential and challenges of these products were the themes of the Southern Brazil Biogas and Biomethane Forum, which gathered around 250 participants in Chapecó, a city of 220,000 inhabitants which is the capital of Santa Catarina’s western region, Sept. 4-6.

One way to make the digestate trade viable is to remove the liquid part and enrich it with chemical elements to turn it into organo-mineral fertiliser, said Vinicius Benites, head of research at Embrapa Soils, based in Rio de Janeiro.

This would make it easier to transport and better prices could be fetched by adding other nutrients to the usual nitrogen, phosphorus, and potassium (NPK) formula, he said. This enriched fertiliser provides greater productivity, Benites told IPS.

Composting and drying, reducing the volume by extracting water, also cut the cost of the logistics required to make commercialising the product viable, Nicoloso added.

He said that a scale of production of at least 5,000 pigs is essential to undertaking the risk of investing in generating electricity.

Technologies and solutions must be developed to incorporate small breeders into the biogas economy, said Clovis Reichert, coordinator of the Forum.

But the consensus is that the potential of biogas, whether from livestock, agricultural waste, garbage or urban sanitation, is immense.

Hydrogen production, already being researched in other countries, is part of its future, said Suelen Paesi, a professor at the University of Caxias do Sul, a city in the neighboring state of Rio Grande do Sul, which together with Santa Catarina and Paraná make up Brazil’s southern region, where livestock biogas is most advanced.