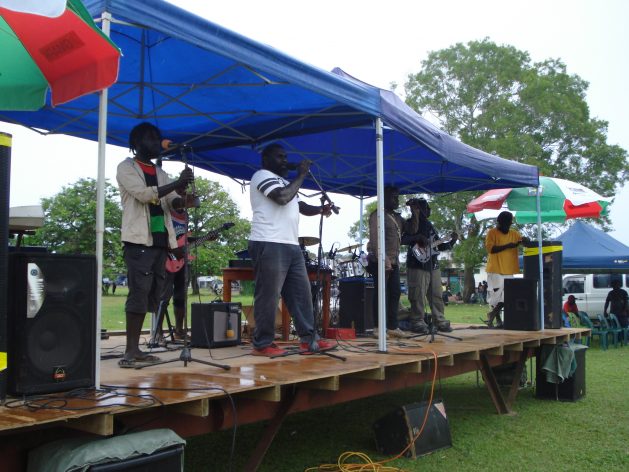 BUKA / ARAWA, Bougainville, Papua New Guinea, Nov 13 2019 (IPS) - The people of Bougainville, an autonomous region in eastern Papua New Guinea (PNG), have aspired to self-government for more than a century. Now their longed-for opportunity to vote on independence will occur on Nov. 23.  But, even with a clear majority in the vote count, the region’s future, which must be agreed and ratified by PNG, is far from certain.

The referendum is a provision of the peace agreement, signed in 2001, which ended a long civil war fought over indigenous rights to land and natural resources on Bougainville Island in the 1990s.  Yet the desire to manage their own affairs dates to Bougainville’s colonisation by Germany in the nineteenth century.

“I believe that independence for Bougainville is nothing new, it has been long overdue; 100 years. People already have chosen that Bougainville must one day be an independent nation and our governments, especially Papua New Guinea, must give us that freedom,” Philip Miriori, chair of the Special Mining Lease Osikaiyang Landowners Association (SMLOLA) in Panguna, Central Bougainville, told IPS.

In 1975 Bougainville leaders unilaterally declared the region independent shortly before PNG, administered by Australia after the Second World War, became a new nation state. However, talks with PNG’s first Prime Minister, Michael Somare, resulted in Bougainville remaining as a province.

But in 1989 conflict erupted when local landowners forced the closure of the Panguna copper mine in Central Bougainville, then majority-owned by mining multinational, Rio Tinto, and the PNG government, after their compensation demands for environmental damage and inequity were refused. PNG, a major beneficiary of the mine’s revenues, deployed the military and a guerrilla war, during which the death toll reached 15,000-20,000, then raged until peace was secured a decade later.

The main goals of the peace agreement are disarmament, establishing an Autonomous Bougainville Government, which occurred in 2005, and a referendum on the region’s future political status. The date of the ballot has changed twice this year to allow the Bougainville Referendum Commission, chaired by former Irish Prime Minister, Bertie Ahern, to verify the electoral roll.  Now more than 200,000 voters, about 67 percent of the population, will respond to the question: ‘Do you agree for Bougainville to have Greater Autonomy or Independence?’ during two weeks of polling to end on the Dec. 7.

Expectations will be high with predictions of an overwhelming outcome for independence. “Our people are excited because they have been waiting for this for a very long time. A lot of people have died. Our leaders, they have been talking about a referendum, so that the people can make a choice for what they want. Because if we don’t do it, another crisis will come back again,” Aloysius Laukai, manager of the local New Dawn FM radio station in Bougainville’s main town of Buka told IPS.

At Buka’s market, Ruth, a vendor from South Bougainville added: “I am really looking forward to the referendum, to voting for i678ndependence. I am voting for myself, but also for my children, my grandchildren and the generations that come after.”

Preparations have included completing disarmament after the United Nations reported in 2012 that ‘not much progress has been made in disposing of the weapons of war left over from the Bougainville Crisis.’  Several former rebel groups didn’t sign the peace agreement or surrender their guns. But, in a major development, all former combatant groups, including the Panguna-based Mekamui, held a summit in July, during which they signed a declaration to give up weapons and ensure peace during and after the referendum.

“We have already completed the weapons disposal. Even if we are not part and parcel of the peace agreement, but we already participate. That’s on the ground, because we have one common goal…We are proud to go toward this destination, the preparation of the referendum and beyond. No more war in Bougainville, the war is over,” Moses Pipiro, General of the Mekamui Defence Force, told IPS.

Yet some women leaders remain concerned, even after the government declared the region weapons free and ‘referendum ready’ in late September. “The declaration on the weapons disposal was achieved, but the weapons are still there. The weapons are still with business people, for security reasons, and other people as well,” Celestine Tommy, Acting President of the Bougainville Women’s Federation claimed.

Security during the vote, to ensure people can cast their ballots freely, will be enhanced by a regional support team led by New Zealand.

But the greatest challenges will be after polling during intense negotiations between the PNG and Bougainville Governments. Many believe that PNG will be unwilling to see Bougainville secede, but Bougainville’s President, John Momis, emphasised in a speech to the PNG Parliament in August that: “The PNG government cannot just ignore the results of the referendum. It must take account of the wishes of the people as it engages with the Bougainville Government about the outcome.”

There is no deadline for the post-referendum discussions, which could be lengthy. And the process is likely to be interrupted if a decision hasn’t been reached when Bougainville is due to hold its next general election in early 2020.

Dennis Kuiai, Bougainville’s Acting Secretary for the Peace Agreement and Implementation, has said that prolonging the decision could provoke unrest. To address people’s expectations, the government will set up a forum for local stakeholders, such as churches, women, youths and ex-combatants, to strengthen grassroots participation in the high-level talks.

If Bougainville achieves nationhood, experts estimate that building the region’s capacity to be self-sufficient could take from 5 to 20 years. Currently the government has no major source of income. Internal revenues have only covered 10 percent of annual expenditure in recent years, resulting in financial dependence on the national government and international donors.

Post-conflict reconstruction and restoration of services has, therefore, been slow. Dr Cyril Imako, Executive Director of Health Services in Central Bougainville, said that people today had a greater sense of freedom and new schools had opened since the civil war ended. But he added that maternal mortality, believed to be about 690 per 100,000 live births, and child mortality rates are very high and health centres regularly run out of basic medicines.

Bougainville’s leaders advocate redeveloping the Panguna mine to increase the region’s fiscal capacity. But this strategy, which carries risks for long term peace, is now on hold. In January last year the Bougainville Government placed an indefinite moratorium on mining after signs that disputes continued among local landowners about the mine’s future.