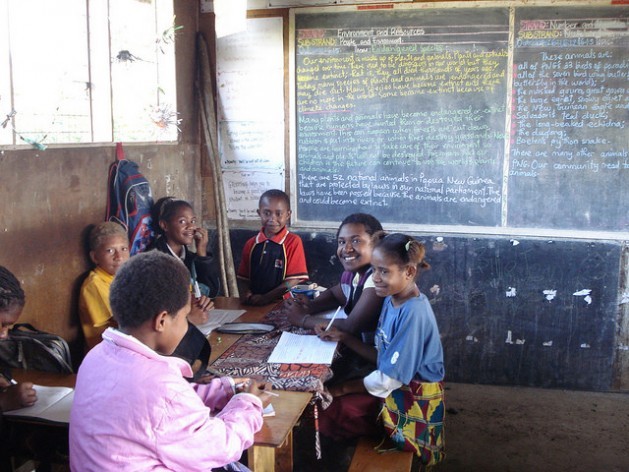 CANBERRA, Australia, Mar 24 2017 (IPS) - In the South Pacific nation of Fiji, free and compulsory education, introduced three years ago, in association with better awareness and child protection measures, is helping to reduce children’s vulnerability to harmful and hazardous forms of work.

But eliminating child labour, which is also prevalent in other Pacific Island states, such as Papua New Guinea and Samoa, is dependent on growing decent remunerated work and reducing inequality as well.

“Because of the level of poverty, particularly in settlement areas, there are a ton of children on the streets who are not engaged in education, they are not in school.” --Reverend Ronald Brown

“The introduction of free education in Fiji has dramatically reduced the problem of child labour,” a spokesperson for Fiji’s Ministry of Employment, Productivity and Industrial Relations, told IPS, with the number of reported child labour cases falling from 64 in 2011 to five last year.

The government’s education initiative is supported by other measures, such as increased staff capacity in the Ministry of Employment to carry out thousands of inspections for child labour and enforce labour regulation compliance. And in 2015 a toll free helpline was set up for members of the public, including children, to report any form of child labour, abuse or neglect.

However, Fay Volatabu, General Secretary of Fiji’s National Council of Women, told IPS that, while she recognized the government’s good initiatives, “children still sell pastries and doormats when we go shopping at night and that should be rest or homework time. Yet no-one is sending them home or checking up on their parents and taking them to task for still making their children work.”

Studies conducted in Fiji and Papua New Guinea (PNG) by the International Labour Organization (ILO) during the past decade identified poverty and financial difficulties as the major driving factors of child labour with children engaged in street vending, begging and scavenging and young girls vulnerable to prostitution and domestic servitude.

More than 60 percent of children surveyed on the streets in both countries were involved in hazardous work, such as carrying heavy loads and handling scrap metal, while 6.8 percent in Fiji and 43 percent in Port Moresby, PNG’s capital, were trapped in commercial sexual exploitation. A study of 1,611 children in Fiji in 2009 drew a correlation between students dropping out of school and the prevalence of child workers, with 65 percent of the latter not in education.

Lack of economic growth, high unemployment and low wages are major factors contributing to poverty in the region with only two of 14 Pacific Island Forum countries, Cook Islands and Niue, achieving MDG 1, the reduction of poverty. The size of households is also a factor with the hardship rate rising in Fiji from zero for a family with one child to 44 percent for a family of three or more children, reports the World Bank. For many poorer families the costs of schooling are prohibitive and sending children out to work is a way of surviving and meeting basic needs.

The value of education to human and economic development, well understood by Pacific Island governments, has been the impetus for free education being implemented in numerous countries, such as Fiji, PNG, Tonga, Cook Islands and the Solomon Islands, and compulsory education in some.

In 2012 the PNG Government removed tuition fees for students in Elementary Prep to Grade 10 and subsidized education for those in late secondary years 11-12. However, while enrolment figures have surged, Reverend Ronald Brown, Chief Executive Officer of City Mission PNG, a Christian non-profit social welfare organization, told IPS that children were still highly visible in the capital selling small goods, such as betelnut and cigarettes, particularly near informal settlements.

“Because of the level of poverty, particularly in settlement areas, there are a ton of children on the streets who are not engaged in education, they are not in school,” Reverend Brown said.

He continued that “the issue is also that there are hidden costs in every school. Many schools charge project fees, which can amount to K50 (15 dollars) per child and up. There is also the purchase of uniforms, which are extremely expensive.”

Both PNG and Fiji have ratified the ILO Minimum Age Convention (No. 138) and Worst Forms of Child Labour Convention (No. 182). Yet City Mission PNG is seeing increasing numbers of trafficked minors.

“We are dealing with more and more children, young girls who are being internally trafficked into prostitution. In 2012, we had about 20-25 women and children in our Crisis Support Centre, now there are 50,” Reverend Brown said. Although he acknowledged it was unclear if the rise in statistics was due to a real increase in cases or wider awareness of the issue.

Fiji, which, together with PNG, participated in the TACKLE project, a joint program by the European Union, ACP Secretariat and ILO to combat child labour through education-related initiatives from 2008-2013, has been rolling out awareness in urban and rural communities in a bid to grapple with the issue at the grassroots.

“So far a total of 200 teachers and 50 police officers together with 150 community leaders and farmers have been trained in the area of child labour and the importance of sending children to school through the free education program,” the Ministry of Employment spokesperson said.

But, even with increased numbers of children accessing primary education, the retention of students to the completion of secondary school remains low in some Pacific Island countries, while many are unable to provide adequate jobs for those who graduate.

An estimated 57 percent of enrolled primary students in PNG complete the last grade, while only 12.5 percent of the estimated 80,000 annual school leavers secure formal employment. In Fiji up to 94 percent of primary level students make the transition to secondary level, but unemployment among youth remains a challenge at 18.2 percent in 2015, according to ILO data.